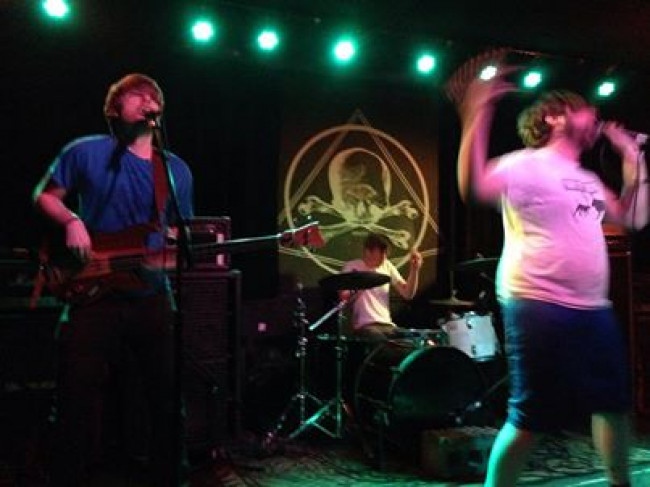 “We’re Vulture Shit…which is the worst kind of shit”

I’d been a-thinkin’ for a while that Sleaford Mods, the post-punk rant rap sensation sweeping the UK nation, deserved the Collapse Board treatment. But three things happened this week that shut down this idea.

1. This Guardian article, which basically claims that the NEW THANG will buck against the career conformist indie cool cookie cutter with noise, destruction, and anger. Which is a wonderful concept – and, no doubt, Sleaford Mods do flip the finger at scenesters – but honestly, what kind of resistance against young white dudes would be comprised only of other white dudes?

Also true noise – ear-splitting, bone-shattering, arm-twisting, blood-spattering, gut-chewing NOIZE – would sputter and die in the mass market. Eagulls is not this noise – they can craft some rather sinister earworms (“I’m puh-SESSED, I’m puh-SEHHHHHEST”), but anyone who finds this skin-rending would find Loveless lethal. Now, Girl Band is brutal, and they dropped their terror strike single “Lawman” for zilch – which, by the way, could very well have been the Song of the Day, and if you haven’t heard it yet then better line up right now to have yr chest ripped open.

3. (Now we come to the true SOTD.) I went to see Eureka California Saturday night at Little Kings Shuffle Club, mainly because Jake and Marie guarantee a fun and girl-safe show everywhere they go, but also because Jake seemed pumped about the touring bands involved. The two northern hooligan gangs that took the stage excited such a swarm of slam-dancing sprites and brutes at the front that I slunk further and further back as the night drew on.

If I stuck to Collapse Board protocol, I’d rave right now about Gymshorts and their laughing, confident front-woman commanding the mostly-male pop-punk band. But then Vulture Shit came on and FUCKING KILLED IT, MAN.

This is what happened. Except, y’know, in the corner of a lil’ bar, not in Shea Stadium. But still.

Yes. That is a bass guitar. And yes, that fellow in front has one prominent beer gut. And hell yes, that is righteous, subversive, all-consuming POWER. Minutemen on steroids, Red Hot Chili Peppers without the massive ego, and basically a good chunk of S/T recs compressed and amplified into one bloody, manic package.

The NOISE from that massive alien soundboard under the bass player battered the audience into a deadly fury. Bloke with the mic was by and large the most volatile singer I’ve ever seen (and I’ve seen John Lydon, albeit merely three years ago fronting a second PiL in Cardiff), exploding into machine-gun verbal assaults and hurling them across the room with obscene gestures.

When reading about the very first wave of punk in the UK, I never dreamed I’d see a true punk show – that is, a setting of pure anarchy, of mutual hostility between performer and viewer. Wrong. Vulture Shit are the real shit, y’all. So go chain-smoke their entire discography (a stream of 7”s with delightful names like “I Love The Way He Touches His Computer” and “The Joys of Employment”) on their Bandcamp page.

Besides, this is free. Eat yr hearts out, Melvins.

This is not free, but blow me what a sexy beast it is.