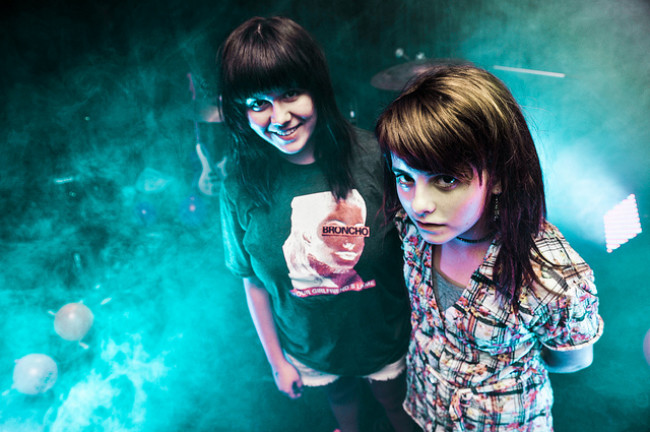 When I heard ‘Perfume For Now’, I took to Twitter with the words “Song of the year in February? Maybe.”

Angered girlish squeals and powerful raging screamed words spat out in the direction of the lyrics’ target. “Frying slowly in butter and fate / Take it take it take it take it- it’s a hunt.” Don’t mess with Kelli Mayo. She’ll chew you up and spit you back out and make you beg… Then she’ll get bored of it and let it go. From ‘Perfume For Now’ and ‘A Little Late’ themes of forgiveness and chasing away hate and bitterness become clear. But first, she’ll kick your ass – like the heavy distorted bass and drums do in this song. I love the wild abandon of the skuzzy bass solo.

Kelli says she was inspired by L7’s heavy catchy choruses when they wrote ‘Perfume For Now’- likely provoked by Skating Polly’s support of L7 last year. Lyrically, it reminds me of Kurt Cobain more than anyone. “She’s feeding dirt mice / She never argues/ She’s indifferent, just like you” And I love the thumping driving bassy-sounding drums played by Peyton. The quiet-loud dynamic is also ever-present and fans of Grunge will love this band and this song if they haven’t discovered their brand of “Ugly Pop” yet. Veteran Skating Polly fans are in for a treat as well, with things getting cranked up a notch on this record. ‘Perfume For Now’ is the first single to be released from their new album ‘The Big Fit’ coming out in April on Chap Stereo Records.

‘Perfume For Now’ is available to download now. Watch the amazing video here: