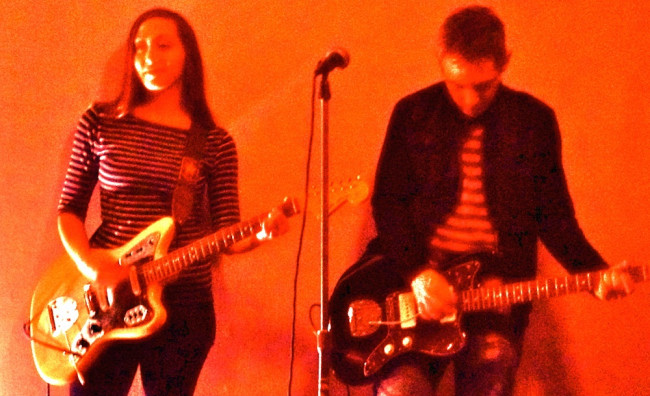 Y’know, that character I conjured for the Viet Cong review wasn’t a total fiction. That pathetic, miserly anti-ego still rips holes in my skin, still tells me I can’t write whenever I sit down to the keyboard, still gets off on corpse-resting-on-marble-tomb stuff like Clan of Xymox. I know it’s that side of me that falls for Static Daydream. Go on, you can have your whole pint of ice cream to sulk with; I prefer being slashed by guitars and numbed by cold pulsing drum machines. Mind, these guys come on like ordinary JAMC-worshipping pop-happy shoegazers (re: Victoria Falls) at first, with the deceptively star-bound “More Than Today”:

But that razor-keen optimism soon gives way to just razors – and whatever shining hope there was for a happy romance is snuffed by familiar images of loneliness (“Another Rainy Night Without You” – totally could’ve been ripped from Psychocandy, this one), dejection (“When I Turn Around You’re Gone”) and shame (“I’ve Destroyed Everything”).

Skim the surface, and it’d be easy to dismiss the whole affair as a light Place To Bury Strangers (Static Daydream snarl, but they don’t howl), or maybe a heavy My Bloody Valentine (“Just Stay”, in particular, stutters and trips in a very 90s baggy way). But then the shadows unfold with more subtlety than that. “Until You’re Mine” swoops in like a shrieking banshee, then settles into a hushed and stately ramble, a sort of New Order snippet with all the profound dejection of Lowlife. “When I Turn Around You’re Gone”, too, comes in swinging (that is, if the Pale Saints ever swung at people – kinda doubt it, but work with me here), but then sinks into a beguiling miasma of lost feedback. And just when you’ve staggered out…BAM! You’re shot down by “The Only One”, even as the C80-ish jangle shimmers underneath.

And even without the sheer volume APTBS, Static Daydream can still shake ya to pieces. You try to resist the churning sludge and contorted edges of “When She Falls”, especially when you’re sucked into the great big echo chamber at the end; or try to endure the battery of “Blue Tambourine Girl” (perhaps the most Sisters of Mercy-ish track on here), under which some murky tragedy clearly lurks, but the current runs too swiftly for you to save it.

That is the biggest downside to the band, which often befalls groups with that echoey monotone – even if you can discern the words, they lose their impact as the walls of noise shudder and collapse around them (see “Run Into The Night”, an otherwise wondrous example of Static Daydream sheathing their sweet side in fangs). But then, that preserves the enigma at their core, this twilight of dreampop and post-punk that resonates with my self-doubting self and leaves me numb. Static Daydream evoke many old demons, but they’ll command you too if you’re not careful.