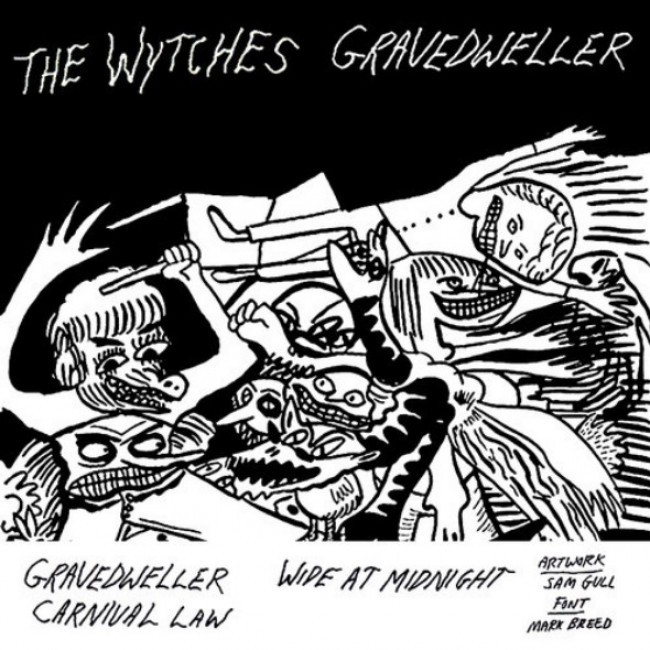 Over the last few weeks I’ve been putting these posts together I’ve discovered that my inbox is pretty quiet Monday to Wednesday and then gets inundated by press releases on Thursday. From this I can only deduce that the music industry spends Monday recovering from the weekend, thinks about work on Tuesday, writes its press releases on Wednesday, emails them out on Thursday, and gets ready for the weekend on Friday. It was a slow week so I put the call out to the Collapse Board contributors to help me out and recommend me something good that they’d heard this week.

Wytches – Gravedweller
Witches have been big on Collapse Board for a while now. I can’t remember where I picked this up from, someone posting it on Twitter perhaps, but purely on the guitar sounds and the distorted vocals, it got me hooked. It’s like what Future Of The Left would sound like if they listened to more rockabilly. And I can only imagine Falco’s response at the thought of that.

Carla Bozulich – Deeper Than The Well
I’d never heard of Carla Bozulich until my friend Betty went out on a European tour with her several years ago. Her record label describes her as “an art-punk heroine”, although ‘Deeper Than The Well’, a track from her forthcoming new album, Boy, is a lot more ‘traditional’ in terms of song structure but still primal enough to be both beautiful and chilling at the same time.

Makthaverskan – “No Mercy” from Makthaverskan II
I’m a massive sucker for this type of pop music. It’s urgent, dreamy, and perhaps a tad exotic? The unpronounceable Makthaverskan isn’t a dungeon in The Elder Scrolls, but rather a dream pop group from Sweden with perhaps some pretensions of playing punk music? some of the BPM meters on these songs on their 2013 record Makthaverskan II must be pushing 160 (reference: ‘Distance’). Lots of teenage indulgence on this record (Is that a Go Betweens bass line on ‘Something More’?) and I love singer’s guttural Liz Fraser (of Cocteau Twins) style. The standout must be the angst and confessional ‘No Mercy’, replete with the requisite amount of teenage angst (example: The line “fuck you for fucking me when I was seventeen”). Indulgent but enjoyable. (Darragh Murray)

The Clientele – “We Could Walk Together” from Suburban Light
British group who flew under the radar for most of the past decade it seems. My streaming music players ‘random recommendation’ function alerted to me and I’m afraid it’s love. Lead singer loves running his vocals through guitar amps, giving this wispy distance feeling and I’m actually reminded a lot of early Augie March before they went to shit (I don’t care what you say, Sunset Studies is a brilliant record). This track off 2001’s Suburban Light has a guitar chorus melody that simply melts you. (Darragh Murray)

Frankie Cosmos – Zentropy
Been meaning to write about Frankie Cosmos for ages. I have about 12 albums by her. You should put her there. (Everett True)

Support Bands of The Week – Lucy Cliché / Sewers / Thigh Master / Four Door
Tomorrow night I expect half of Brisbane to be at The Underdog for the Blank Realm album launch. The fact that the headliners aren’t due to start playing until 12:15am on Sunday morning is already bringing a tear to my eye but the support cast for the night – Four Door, Lucy Cliché, Sewers and Thigh Master – should go someway to easing the pain/tiredness.

St. Vincent – Digital Witness
I’ve had access to the new St Vincent album all week and yet because the record company decided to make it stream-only (it might change in due course), I just haven’t had time to sit down and listen to it. The anticipation is killing me.
http://youtu.be/mVAxUMuhz98

Aggi Doom – Sirens
The cool girls we all wish we could be. (Tamsin Chapman)