The return of Everett True | 57. The June Brides 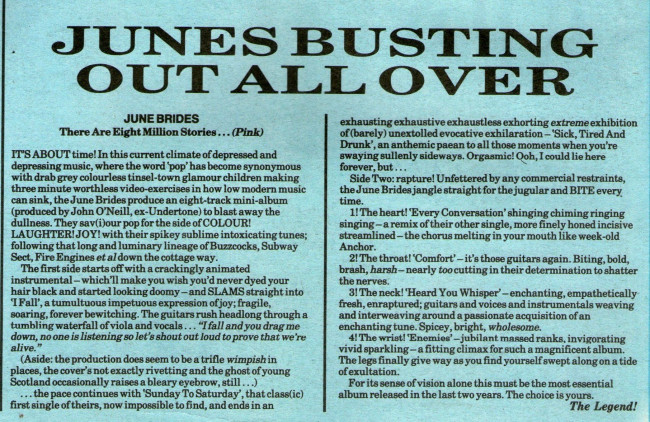 Isaac’s playing his viola now, so I’ve stopped listening to the music. The viola seems appropriate, this is The June Brides.

Earlier today, I was asked what sort of music I play at home with the three children. I replied that I rarely do, we don’t need the noise competition. Lauren likes to sing her rhymes, take a great delight in it. Isaac has a handful of vocodered tunes he knows the words to, they’re at the end of films, all torn trivial emotion and sweeping gestures. Daniel is Daniel. Sometimes I’ll have the chance to play shit when everyone’s out – during the day, I usually work from home: I don’t work, just malinger – but I prefer not to, it feels at odds with the green outside. I’ve never seen music (or sound) as filler anyway. Some folk prefer to keep the radio on, as company. Why? I’ve always liked the spaces in between. Maybe when all our kids have left I’ll rue the silence.

The June Brides had silences between their notes, starts and uncalled-for stops and rushes, burst of enthusiasm. I’ve never really written about them, not since when. I regret that. I recall some of my most Legend! writing ever in the NME was centred around their album – if they’d have allowed me to print a series of exclamation marks, each one more expansive than the next, I would have done. Sentences were truncated because there was no time. Words were to be moved on from. All I was trying to do was capture the rush of blood that occurred every time I heard their music – “You send shivers down my spine/And it happens every time” – this weird chemical reaction. Better than missionary sex, trust me.

So The Legend! remains, just. Endures. Maybe. Ghosts of the past litter my present. Maybe that’s always the case when you pass a certain age. (No one ever tells you. Everyone dies.) Facebook – my world, my only world – is full of such ghosts. People who knew me when I was a different age to whatever age I am now. Some of them like me because they think I embody something in their past. Some of them think I’m witty or insightful, doubtless. Some of them are just there. I feel more sympathy towards those from the Eighties currently, not that it necessarily will remain that way. I’m intrigued by my life in the Eighties. I can recall so little of it, even the emotion. The only way I can hope to capture the emotion is through the music. (Maybe it was always that way?) I don’t automatically like everything that reminds me of that decade – far from it – but occasionally I like to be reminded of the time I was considered special. (So different, so alien to life in Brisbane!) The June Brides and The Legend! seemed inexorably linked for some time. Their music soundtracked where I was at. I could hear the calls behind me on the street. The quaver in Phil’s voice. I could  taste the brass section. It was me. I was them. They were me.

You’ll notice I haven’t talked once about their music, this new Song of the Day. That’s cos Lauren is now wailing up a good ‘un, set fire by the fact it’s Daniel’s turn with the TV. Quick. There’s a brief lull. The silence is so sweet. Can we make this respite any sweeter? Let’s play the song. Let’s play the song.