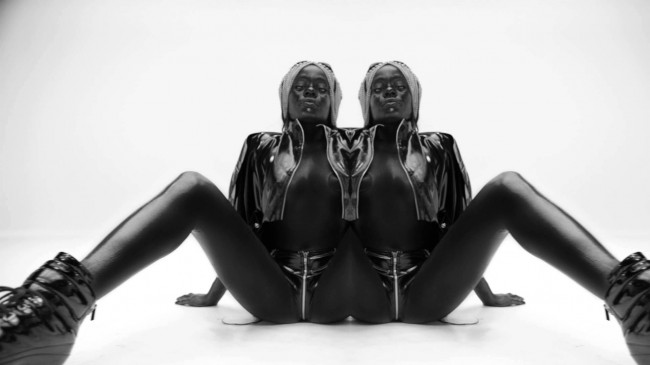 Look at all the comments underneath this video. Most every single one is pitting her against another female rapper – usually Nicki Minaj or Iggy Azalea. Or perhaps Brooke Candy. Lady Gaga, even. Like there really isn’t room for more than one female in rap or hip-hop or pop music, whatever you want to call it. Seems a weird stance to take. Would it really be so wrong to be into the booty-shaking pop groove of Iggy, the outlandish glam and slam of Brooke, the sheer mind-warping inventiveness of Nicki, the messianic qualities of Gaga AND the fluid, smart funk of Azealia? Bring the ladies on! Bring ’em on! Why not pit Azealia against Eminem? Gaga against Chris Martin? Whatev’s.

I just wanted to acknowledge the fact Azealia still rules. This don’t mean I don’t think others don’t rule, just that I want to acknowledge Azealia. How’s this new album a failure, a disappointment? It sprawls and discovers where others cower. Its brashness and imagination and genre-bending is as sexy as all fuck. It teeters with imagination and incoming storm clouds. (Not since Beyoncé has an album so teetered with realised imagination.) It’s a big fat kill. It’s a kaleidoscope of kaleidoscopes. It’s heavy metal like I understand the words. The Ariel Pink collaboration ‘Nude Beach A-G0-Go’ inverts decades of adonyne white pop supremacy. ‘Soda’ makes me squirm with pleasure. ‘212’ is  the greatest single this decade. ‘Miss Amor’ reprises it a little (‘Little Drummer Boy’ gone feral). ‘Chasing Time’ is a dancefloor-filling diamond, exhibiting an understanding of rhythm that perhaps others might want to draw from? She sure knows how to go with the flow. Sexy as fuck, too.

Or have I said that?

Azealia Banks is using her struggling artist days as a stripper to good use.
The bad girl of rap shows off her moves and a whole lot more in her provocative Chasing Time music video.
Azealia, 23, dances and sings in an array of interesting outfits, but most catching is the futuristic garb that seems to be missing a top half.

Half-naked except for that one-sleeved playsuit and a pastie with twirling tassel often associated with strippers, the singer dances to the beat of her song.
‘Take a chance with your lover like this, begin!’ Azealia sings.
The video opens with Azealia grooving with a group of back-up dancers in a flouncy ensemble and then white trousers and crop top.

The camera catches her eye up close and it turns to red as she croons, ‘Dealing with the Devil you ain’t never ever gonna be mine.’
Suddenly things get really wild when Azealia appears in her futuristic playsuit and tassel along with thigh-high boots.
Then she morphs into a pair of twins joined by their bare backsides, both giving the viewer lazy eyed looks behind their trailing braids.

The camera angles take some daring moves too as Azealia continues her musical work of art.
There was a not too distant time when the Harlem-born star was homeless and destitute.
‘That’s when I was really depressed,’ Azealia previously told Juicy. ‘I didn’t have a manager, I didn’t have a boyfriend, I didn’t have any friends, I didn’t have any money.
‘Here I am working at this strip club, trying not to get into fights with these girls who don’t give a s**t.’
After hit singles as 212 enjoyed some major play, Azealia’s first studio album Broke With Expensive Taste was released earlier this year.

…and they say the art of music criticism is dead….