Xylouris White – Goats, and live in January 2015 at Howler, Brunswick 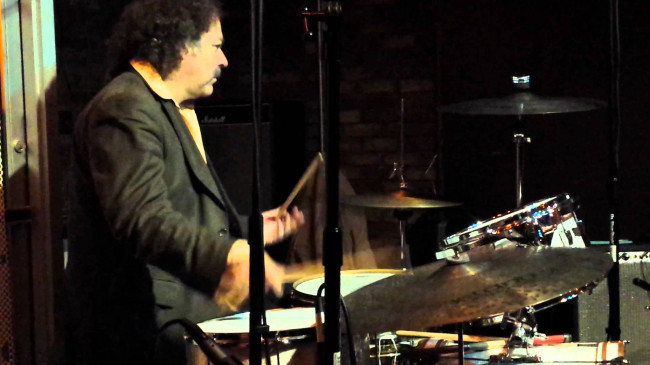 Melbourne’s had a long-term love affair with the Dirty Three, and a long history of Greek migration – the largest Greek population outside of Athens they used to say, or some such rubbish. Anyway, there’s lots of Greeks – I’m married to one, for example; I live in Melbourne, so the odds were good that my beloved was going to be Greek. The love was in the room, along with a lot of Greeks (including my wife), for the arrival of Xylouris and White at Howler in Brunswick, a newish venue in this hippest of Melbourne suburbs. White, being Jim, the wild-haired paunchy drummer from the Dirty Three, and Xylouris being Giorgos, one-time Melbourne resident and Cretan legend of the Cretan lute – a man with vast Cretan musical history in his blood –were here to present the fruits of their recent collaboration; Goats.

We had to battle through the ugly hoards occupying the large crowded front bar/Asian street food area to get to the back of the converted warehouse, where the decent-sized band room was pretty much sold out. When we arrived we caught the end of Laura Jean’s whimsical and thoughtful Joni Mitchell style folk songs about love and location. She expressed her undying love and admiration for the XAYlouris family, simultaneously demonstrating her knowledge and ignorance of the family’s legendary status in Cretan music. Curiously, she made no mention of Jim White, whose status as local legend is surely unchallenged, despite the fact that he, together with the phlegmatic Mick Turner, are so much the solid backbone to the gyrating, thrusting dervish that is Warren Ellis, the Dirty Three, Bad Seeds and Grinderman multi-instrumentalist.

In Xylouris White, Jim is much more on an equal footing with his collaborator. At least he is on the record, Goats, which is almost entirely made up of instrumental pieces, much shorter than the Dirty Three material, with Greek motifs and sparse lute and the usual range of superb drumming, from soft brushing and rolling, to cacophonous Venom P Stinger style punkiness. Live, the duo sit side by side, Jim all hair and gut, leaning back as he rolls his arms almost indiscernibly around the kit, and Giorgos upright, serious, playing off the rollicking beats created next to him. Live, Giorgos sings more. He sounds like someone who has smoked all his life, with a deep nasally wailing style, which will be familiar to those who’ve heard a bit of Greek music – Rembetika or otherwise.

I watched a bit from the side of stage, with my beloved, in the glassed off room where the music is pumped in from the band room, and got a good view of the unfussed and efficient style of Jim White. Ms. van de Legende pointed out that for a man who makes so much of a racket he seems to expend remarkably little energy, although the sweat patches on his buttoned-down shirt do suggest otherwise. I once introduced my brother, who was a drummer in an up and coming Melbourne band at the time, to Mr White at a Venom P. Stinger gig. I’d met him a quite a few times before – affable guy, wears the same op shop suit every time I see him, I’d sold a truckload of the first Dirty Three cassette at a shop I worked at– and thought my brother should meet Melbourne’s pre-eminent drummer. Jim examined him with a look of bored disdain – “so, you’re probably in some pop band” he sneered. How punk. Of course he was right, but it reminded me again that keeping the artist and the human separate is often a good thing. My wife once saw Eric Clapton plop himself down in a first class seat, take off his shoes, and proceed to clip his toenails in front of the passengers and crew. In our household, he’ll forever be known as Eric Clipton.

I thought I’d brave the crowd of grey-hairs and young hipster to get a better view of Jim’s magnificent, pounding, hairy chest for the second half of the gig, so I left Ms. van de Legende behind in her hermetically sealed seat eating Thai buns. The place was packed, and the heat had gone up considerably as the hirsute duo raised the tempo with some fearsome luteage and pounding drums. I inched my way toward the front between songs in that awkward staged way of the solo gig-goer, with no friends to claim the space, until I got to somewhere near the front with a view of the hair/drummer in, what I thought was, a slight gap among the throng. I was wrong. No sooner had the frenzied punk-folk tune fired up, when a question whined into my ear “ARE YOU GOING TO MOVE? ITHOUGHT YOU WERE JUST PASSING THROUGH?” I turned to look at a scrawny beanpole, looking harried put out and pleadingly. “You’re a head taller than me mate,” I said. “You’ll be right.”

Now, I’m not usually one to push up the front, and I’m not a big fan of confrontation, but this slightly unhinged character was getting up my Greek goat. A minute or so later he was back: “I’M TRYING TO DANCE! I THOUGHT YOU WERE PASSING THROUGH. ARE YOU GOING TO MOVE?” This was repeated a number of times amid attempts by the gangling doofus to stick an elbow in the back of my head, presumably to demonstrate that he really needed the space to dance. I waited out the long piece being played and the whining entreaties to allow my new acquaintance to dance, before moving on with a pat on the back and a look of pity – “Enjoy the rest of the gig” – this is Melbourne after all, not Syria. There was love in the room, and this character was clearly having a major meltdown over the restrictions I was imposing on his desire to DANCE for fucksake!

I returned to the side viewing room. We left a bit early. The live Xylouris White experience had been quite different from the sedate almost mediative feel of the Goat album. It certainly generated excitement and frenzy in the old and young crowd, and, in at least one case, a desire to DANCE! But for us, it was time to go. He disrespected my brother – I’m not staying to the end.