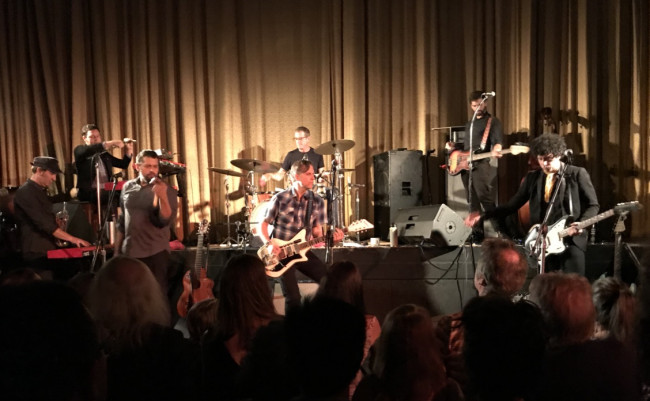 I love a road trip. If I didn’t have to work, I’d probably buy a VW Kombi van or a convertible Mustang and take off with little more than a fridge, my music and my dog. At risk of being chastised by the family, I’ll qualify this by saying there is something deeply personal and indulgent about a road trip. It’s an escape. A fantasy.

So, even a one-and-a-half-hour drive up the Calder Highway to Castlemaine can be construed as a road trip if it entails the escapism part (tick), and the fantasy part—to find Calexico playing in a lovely old theatre at the end.

Disclaimers: a) they’re my favourite band—probably seen them 10 times over the years, and b) went to their two magnificent gigs at Melbourne Recital Centre (MRC) last week (24.01.19 and 25.01.19—musically 10/10, but audience participation value 6/10), one gig of which the band gave me tickets for my birthday (‘Thanks!’). Melburnians love Calexico and MRC is a fine space with fantastic acoustics, but we just want to shake out the cobwebs, be transported, lose ourselves from the ratrace for a few hours.

The scene in Castlemaine is so chilled compared to the bustle, construction dust and oppression of a Melbourne heatwave. Castlemaine’s Theatre Royal is intimate yet ample for the crowd, and this evening in the beer garden it’s cool and pleasant (minus the occasional whiff from the portaloos!)

Jess Ribeiro, (celebrating her birthday) plays the support, this time with her band, after two lo-fi solo performances in Melbourne. People amass on the parquetry dance floor during the interval before Calexico appear on the stage.

It’s a slightly different line-up to usual, but the bones of Calexico remain. Joey Burns commands up front on vocals, guitars and crowd revving. John Convertino is the dynamic glue of the whole outfit, the most suave and intuitive drummer outside the world of jazz. Jacob Valenzuela evokes shivers with his blazing trumpet and vocals, especially impressive when he simultaneously plays brass in one hand and maracas the other. Sergio Mendoza bops and sways while making the keyboard and accordion sing all night. Scott Colberg, on bass, is a more recent addition and the band dig him big time.

Brian Lopez (who seriously resembles the young Bob Dylan) is replacing Jairo Zavala this tour, and is hot on lead guitar. Portuguese birthday-boy (also today) Raul Marques, is replacing Martin Wenk, and duels gorgeously with Valenzuela on trumpet. This alternate line-up certainly have the right chemistry.

This tour is about their most recent album, 2018’s The Thread That Keeps Us. Over the three concerts they play a total of 33 different songs, up to ten off The Thread…, the rest from their massive back catalogue plus a few covers. Where do I even start to find highlights?

Grungey opener, ‘Dead In The Water’ sets the pace. ‘Voices In The Field’ and ‘End Of The World With You’ introduce Lopez’s impressive guitar skills. In ‘The Town and Miss Lorraine’ Burns pulls it back with his dreamy west coast melody, and sweet lilting guitar.

They’re also celebrating the 20th anniversary of their evocative 1998 album, The Black Light, and quite a few of its tracks are rekindled live. ’Stray’ grooves it up with singing horns and sultry lyrics, and it’s fun to watch the whole band giggling along to Colberg’s impassioned upright bass solo on three nights running. But it’s the instrumental ‘Minas De Cobre (For Better Metal)’ that really gets the crowd going—dancing, twirling, howling like coyotes and swaying to this lush south-western soundtrack. Calexico at its glorious best.

The beauty of this Castlemaine gig is the proximity, the connection, being able to boogie. This stands it apart from the Melbourne concerts, as much as we loved the vibe, the sound, the trumpets sneaking up into the balconies, it’s just not the same. I’m a city chick but I’m pretty old school.

I’m entranced by their cover of Echo & the Bunnymen’s 1984 ’The Killing Moon’ (with Lopez on lead vocals), a song that’s always been one of my favourite pieces of 12” vinyl and graces my turntable quite regularly. Clearly we hail from a similar decade of British new wave. An era when teased black hair, pointy shoes, androgeny and lamentation were de rigueur. If you asked me back then, would I like ‘alt-country’, ‘southwestern’, ’Tex-Mex’ and ‘world’ music (as Calexico have been described), I would’ve laughed. But maybe I grew up and went on a similar trajectory through bands like the Smiths, early R.E.M., The Pixies and Nick Cave to somehow arrive at Calexico.

Only they make the music, and I merely listen.

It’s going to be a bit of a come down this week, after last week’s festival of Calexico.