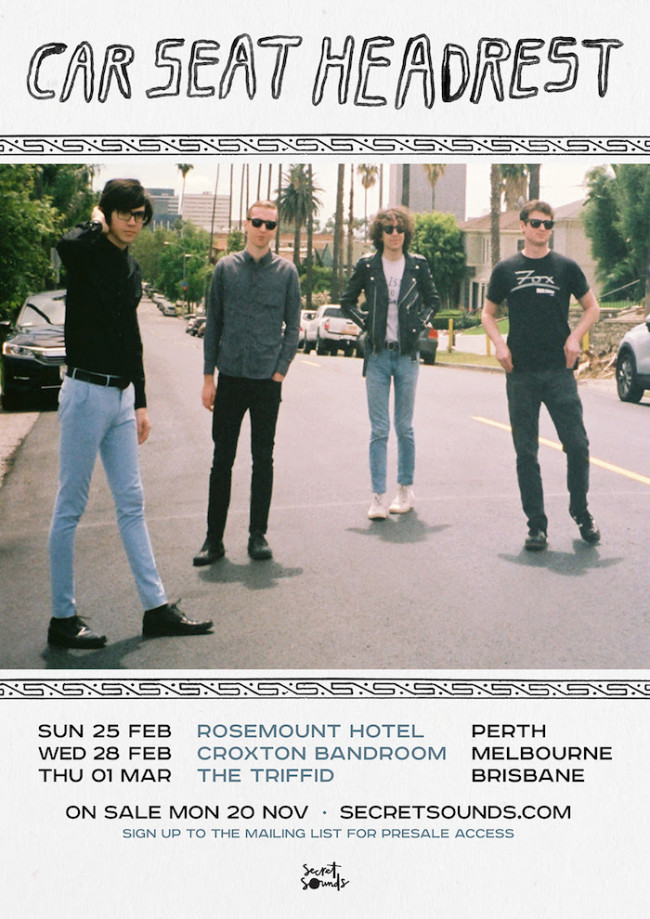 Car Seat Headrest have quickly risen in popularity since their 2016 album Teens of Denial. Starting as a lo-fi solo project of frontman Will Toledo back in 2010, they have since been prolifically putting out records of hook-filled indie-rock, with the most recent release being February’s Twin Fantasy, a re-recording of their 2011 album of the same name. The record is full of their signature drawn-out epics filled with self-loathing Lou Barlow-esque lyrics and has been met with near constant critical acclaim since its release. Having been interested in their music since Teens of Denial, I was excited to see how they would approach their material in a live setting.

Support act Morning Harvey are a local 5-piece indie-rock act of which I was only loosely familiar with beforehand. Frontman Spencer White gyrates around the stage as they deliver their fuzzed-out pop songs to a surprisingly full audience considering it was a full hour until Car Seat Headrest were due to come on. They’re fun to watch and are full of straightforward energetic choruses which help to raise the excitement of the crowd even if they don’t leave much of a lasting impression.

Car Seat Headrest arrive right on time and spend the majority of their set on songs from the newly released Twin Fantasy record. From the beginning, it seems clear that they’re aiming to ramp up the energy of their songs in comparison with their studio counterparts. An early highlight, ‘Fill in the Blank’, from their 2016 album Teens of Denial, noticeably rouses the crowd as the seven-piece band, complete with Will Toledo’s maracas and a recurring synth-line add new texture and energy to one of their most well-known tracks. The set as a whole carefully balances moments of hard rock intensity with more drawn-out brooding passages. Many of their songs are structured as multi-part epics with slow build-ups and punctuated with climaxes of punk-rock abandon. After the confessional, neurotic lyrics on the verses of songs like ‘Destroyed By Hippie Powers’, the bursts of energy at the chorus function as a purge of frustration which is exhilarating in a live setting.

Each song’s dynamics are handled well by the large band, keeping the audience engaged and energetic throughout the performance. The most effective moment of the night is the final refrain of ‘Drunk Drivers/Killer Whales’ with the majority of crowd members shouting along “It doesn’t have to be like this”, the cathartic end to perhaps what has become their signature song. Tracks from Twin Fantasy such as ‘Bodys’ and the dozen-minute ‘Beach Life-in-Death‘ are met with cheering approval from the crowd as the clearly well-rehearsed band wind through all the different sections which often bear little resemblance to what came before. A short burst of unrelenting energy is thrown in mid-set with Will stepping back and allowing Naked Giants (who were embedded into the 7-piece live band) to tear through their brash and punky track ‘Pyramids’. Although radically different in tone from the Car Seat Headrest material, it’s a chance for the group to let go at full intensity. The crowd seems willing to trust anything Car Seat Headrest decide to try out, including a faithful cover of Simon and Garfunkel’s ‘The Boxer’.

The 90 minute set races quickly by and the encore begins with Toledo on piano, playing a laidback cover of Frank Ocean’s ‘White Ferrari’ before the band returns to transition into an excellent performance of ‘Twin Fantasy’, the self-titled track off their latest release.

Overall, it’s a satisfying performance from a band whose odd song structures could have easily come out awkwardly when played live. The band displayed a wide range of different moods and levels of intensity while keeping up a steady stream of solid pop hooks. I couldn’t imagine many crowd members leaving disappointed.