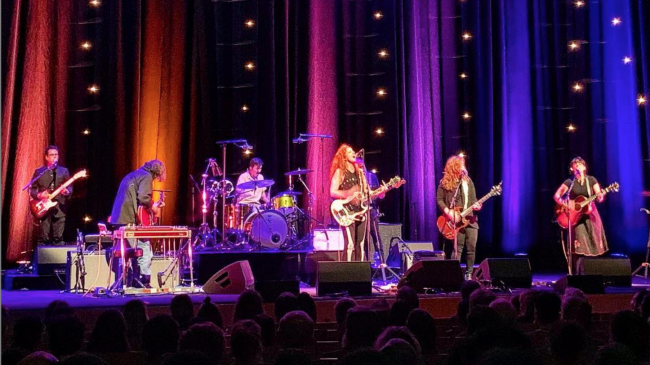 It’s been a busy week for live music all over Australia. There were so many tantalising acts, both local and international, I had to rationalise and choose how many gigs I could attend (unfair). By the time tickets went on sale for Neko Case at the Melbourne Recital Centre, I almost couldn’t justify the number of nights out in one week. But, when I was offered tickets to see Neko, there was no way in hell I could refuse.

Neko is a strong woman and individual thinker, a powerful songwriter and gifted vocalist. I saw her in 2014 at the Corner Hotel in Melbourne and was amazed how she belted out her tracks so pitch-perfectly. Heard her speak at Melbourne Writers’ Festival last year and managed to say hello and chat afterwards about rescued greyhounds (close to both of our hearts). She was jet-lagged but looking forward to touring her new album, Hell-On (Anti-), here in Australia after a five year hiatus.

At MWF she talked about losing her house and barn to a fire, but how her personal disaster seemed to pale in comparison to a bunch of simultaneous natural disasters. She spoke glowingly of a book, ‘The Amazons’ by Adrienne Mayer (2016), exploring the historical warrior women and the concept of women reclaiming strength and equity in this world. She described how the book helped her ‘feel like a super-powerful human being’ and allowed her to feel joy again.

Returning from the embers of her house-fire with vigour, she has rebuilt her life and released Hell-On in 2018. She’s been touring pretty constantly since.

At the first of her two concerts at Melbourne Recital Centre, she arrives on stage in her skeleton-print leggings and black top spangled in gold, her hair out and aflame. The audience are deathly silent, which is okay for the opening track, the slow-building ‘Pitch or Honey’. Neko’s every consonant and breath are audible, and I have to smile when she breaks into the chorus,
“Hey, I love you better when you’re wild
Suits you better if I say so.”
Kind of appropriate for this rather stilted audience.

‘Last Lion of Albion’, one of the catchiest of her new tunes, and ‘Deep Red Bells’ (Blacklisted 2002) stir the sluggish a little, but not enough (the songs were fantastic, c’mon people!).

Neko and her backing singers seem amused by the formal surrounds, complete with its carpeted stage. They take to chatting about that and the number of guitars they’ve brought with them; Neko estimates they’ve lugged over a shipping container–full (feasible given how many guitar changes they all make during the gig) plus they’ve been loaned a few handsome blue ones from Melbourne’s Harvester guitars.

Her six-piece band are tight, a collective of musicians from all over the U.S. it seems. They include regulars Paul Rigby (guitar), Jon Rauhouse (guitar and pedal steel) and Rachel Flotard (guitar and backing vocals). Neko plays 23 songs in total and never misses a note. Her voice is strong and pure throughout and she plays a plethora of guitars and tambourine. When she chats she’s kind of shy but funny.

It’s hard to define particular highlights. There’s plenty off Hell-On like the beautiful and fierce ‘Oracle of the Maritimes’, and the lilting ’Winnie’ with her triumphant refrain,
“We were warriors!
We clothed ourselves in the guts of our enemies!”

The fans appreciate older faves like ‘Hold On, Hold On’ (Fox Confessor Brings The Flood 2006) and ‘This Tornado Loves You’ (Middle Cyclone 2009), but I think everyone’s favourite on the night is ‘Man’ (The Worse Things Get, The Harder I Fight, The Harder I Fight, The More I Love You 2013) which is totally rockin’ with six different guitars playing to end the set. The band is on fire and sounds fantastic. So too, the encore of four songs is impassioned and they treat us to another guitar jam during the final song, ‘Ragtime’ (The Worse Things Get…). Neko is one consummate professional and can hold a hall in wonder. Thoroughly enjoyable.