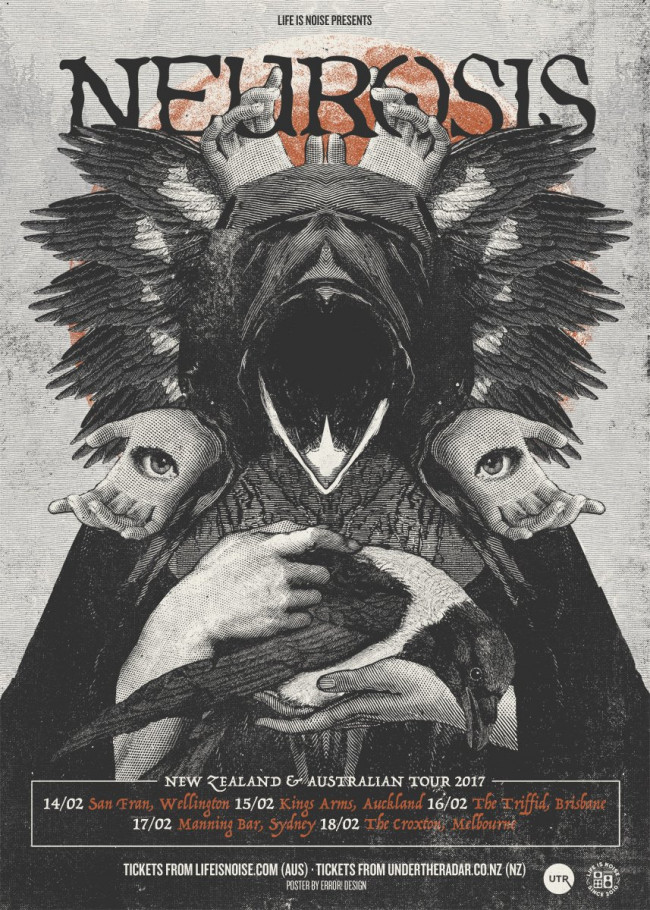 California’s Neurosis have spent the last 30 years delivering some of the most confronting and boundary-defying metal of any era. Having been a fan for several years and knowing their reputation for notoriously intense live shows, there was no way I was going to miss this performance, especially with Sydney’s DISPOSSESSED in the opening slot.

I’d wanted to see DISPOSSESSED for a long time as I’d read about their confrontational style and their dedication to delivering important political messages to the predominately white audiences that populate underground punk shows in Australia. They took to the stage with lead singer and guitarist Birrugan Dunn-Velasco delivering a powerful monologue acknowledging the traditional owners of the land and reminding those in attendance of the continuous discrimination against Indigenous Australians in this country. There was a striking call to action for the audience to take their own steps to confront racism in Australian society and to not “just go to a DISPOSSESSED gig and think you’ve done your part”. These emotionally powerful opening statements provided context for their extremely raw and heavy set. Their songs are passionately delivered in both English and Gumnaynggirr, a native Aboriginal language. Musically, they display influences from death metal and hard-core punk and are anchored by the incredibly fast and dynamic drumming of Jarrod Smith. There is a very unrelenting sense of anger running through each of their songs which is exhilarating to witness. It was a great experience to see one of the most important bands in Australia deliver such an uncompromising set.

After being given 20 minutes to cool down from the intensity of the DISPOSSESSED set, Neurosis enter to dimmed lights and immediately burst into 10-minute epic ‘Lost’ from their 1993 album Enemy of the Sun. They don’t waste any time trying to ease you into their relentlessly dark and frightening aesthetic, it’s thrust upon you from the eerie opening sound effects and doesn’t let up until they leave the stage and the lights are switched on again. Between songs, synthesizer and keyboard player Noah Landis triggers unsettling samples of distorted speech and strange electronic sounds. It’s a very effective approach for a band that relies so heavily on building an atmosphere as it doesn’t allow you to take a mental break from their performance.

Their set encompasses nearly all of their excellent new LP Fires Within Fires, whilst also spanning across 25 years of earlier material. The fourth song of their set, Locust Star, was met with loud cheers from the audience and was the highlight of the night for me and likely many others. At 6 minutes, it’s relatively concise for a Neurosis track and the incredibly sludgy riff conveys the sense of claustrophobia and dread that has become a real trademark for the band over the years. The vocal duties are mostly traded between guitarists Scott Kelly and Steve Von Till, along with an occasional contribution by bassist Dave Edwardson. The vocals sound like shouts of terror and anxiety above the sludge created by the rest of the band. It seems like 30 years of touring hasn’t reduced their power at all. Throughout the set, Noah Landis had the most energetic and fun stage presence. He jumps around, swings his synthesizer back and forth and clearly lets himself get taken over by their music. The crowd seems to feed off of his energy and it was a great atmosphere to be part of.

Seeing Neurosis live was every bit as cathartic and intense as you could hope for, and it’s rare that a band can still produce such a genuinely unsettling performance 30 years into their career. They have a level of chemistry that can only come about through playing together in a consistent line up for many years and they’ve shown no signs of letting up.