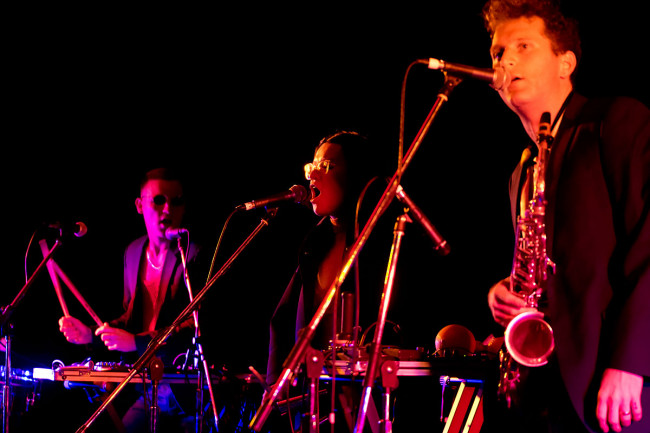 NO ZU are a group which is difficult to pin down. Reaching into a rich history of dance music obscurity with magpie mentality they combine the deep cuts of disco-funk, no-wave, and worldbeat with their own inventive ideas. The result is something you can’t quite put your finger on but is instantly danceable. Live they deliver an energetic and unpredictable sound littered with moments of single-minded rhythmic genius. From between these brassy funk and locks-grooves strikes their raw and spiritual energy, a highly charged compulsion to move the body the Melbourne outfit simply terms the “Heat Beat”.

Lured by the promise of the heated beat, a large body of nocturnal groovers flood toward the QGOMA stage. Like their audience, NO ZU are a collective entity constantly in motion. Funky bass patterns and trailing saxaphone fills spin outwards with an unrelating momentum.

The polyrhythmic pull of ‘Spirit Beat’ emerges early within the set. It’s touched by a hard shot of funk and seemingly every element bleeds with percussive edge. Earthly grooves are counterbalanced by the sensuous sax lines which float over the instrumental melange. It’s a pump-up anthem deployed to full effect.

With ‘Zeus Zam’ straight ahead thump gives way to suggestive shuffle. Uncannily compelled to amble ever closer toward the dance floor’s centre, there’s little chance for intellectualisation. This is ear-driven boogie, accompanied by sax work for the ages. Mood painting body music incites swathes of human movement. Adding to the hypotonic sense of dance tribalism, members of the band take turns at vacating the stage to play from amidst the crowd.

Unstoppable, ‘Raw Vision’ surges forth laden with triumphant vamps. If funk is what the listener wants funk is what ZU will provide. It’s a music which revels in the absurd but is played with focus and passionate intensity. The Heat Beat is a difficult proposition to knock back.