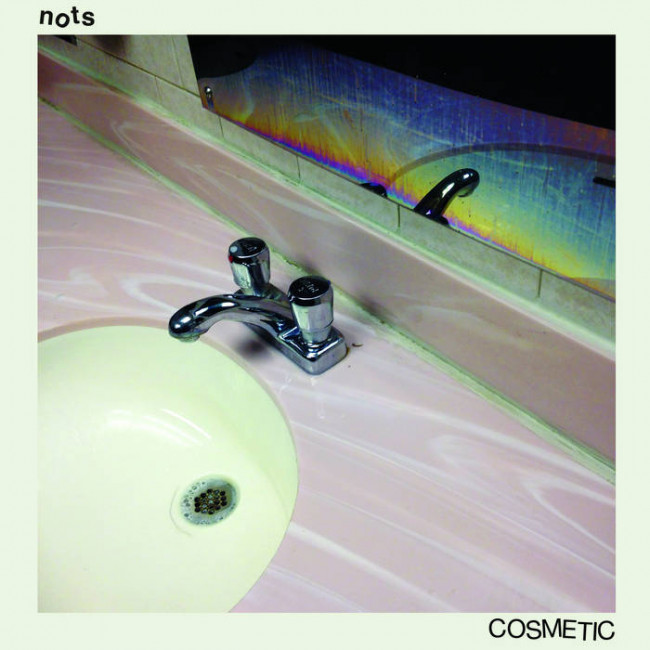 “No novelty”, shouts Natalie Hoffman, lead singer and guitarist of Memphis punk band Nots, on their sophomore record Cosmetic. It’s one of the last tracks on the record, but it’s the one to reference in case someone wants to point out that this gang of four is “an all-girl band”. Carrie Brownstein has often stressed the unnecessary descriptor. She shouldn’t have to. And yet countless bands that feature women in them, especially if they’re predominant, are lumped together under this category, regardless of genre or musical innovation.

Natalie Hoffman, drummer Charlotte Watson, synth keyboardist Alexandra Eastburn and bassist Meredith Lones are not letting anyone get away with it on their watch. Cosmetic is the follow up to their 2015 album We are Nots, where they announced themselves through a burst of short blistering songs that professed a love of repetition, whether guitar lines, synths or lyrics, as most of the album is made up of schoolyard taunts in unison such as ‘Insect eyes’, ‘Reactor’, ‘Black mold’. Most are less than two minutes, and after a while became a bit too repetitive. There was no room for experimentation or innovation – Nots believed firmly in the words they chant, and they wanted you to experience those words as states of being. But they weren’t doing anything interesting, and Hoffman’s vocals seemed lacklustre.

With this second album, Eastburn has gone confidently weird with her synths, Hoffman develops a sassy Kathleen Hanna inspired vocal style, new bassist Lones is a post-punk aficionado, and Watson keeps it real with her stripped back heart-racing drums, and they’ve spent a lot of time rehearsing and touring and meshing. The result is enticing – there’s a lot of unpredictability on this record, and the existential atmosphere has intensified to the point of suffocation, in a desirable, Joy Division way. Nots are not afraid to dab their fingers in the bleakness of life and smear it on your face. ‘Blank Reflection’ opens with some mellow watery synths, before the barrage of needling post-punk guitar lines that morph into dense abrasion and then back again. The sharp notes are in sync with the growing intensity of Hoffman’s alienated emotions. They emphasise coldness, a cold night, cold steel cold silence – she is looking out her window but there is nothing to see. There is only her blank reflection staring back at her, which seems a summation of the world.

Second track ‘Rat King’ is a relief after the freezing first track, a straight-up punk number with the familiar muffled chords, except with ominous dissolving circles of synth warbles. Reminiscent of their first album, the spat-out mantra of ‘Rat King’ is repeated over and over, a taunt. They don’t reveal who the rat king is, but it’s someone who shovels out dirt and expects people to eat it. Nots say, we’re going to spit it back at you. Their defiance is intense. “Death is only a word for you”, they sing, Hoffman’s voice dripping with disgust, and the line reveals that, for all their existential angst, Nots are not nihilists. Their passion betrays them. They’re angry at a world that creates apathy and nihilism, and where there is anger, all is not lost.

‘Cold Line’ is one of their best tracks. It opens with a heavy bass reminiscent of Joy Division, and a synth melody that is mournful. The muted tense guitar work at the beginning builds up to the first line: “you saw yourself / reflection in glass / cold line of hate” and gives way to the revelation of a dysfunctional relationship and the blurry line between love and hate. The synth is slightly poppy, making the chorus hummable. The repetition of “I can’t talk to you” is full of painful frustration, and reminds one of ‘No Looking’ by The Raincoats. It also has the erratic emotional guitar work of a song like ‘She’s Lost Control’. There’s no single influence, but they’ve managed to meld a bunch of punk elements in a way that works well with what they have to say.

One of those forebears is The Cure, whose shadow haunts the song ‘New Structures’. The clean jagged guitar line zigzags like a Robert Smith heart beat, and lays the groundwork for their feminist appraisal of ‘used structures, new structures, obsession and possession.’ The sparse lyrics highlight the need to dissect the connotations of each word, what they mean to society and how we can change that. The guitar rises and falls with the vocal punches, Hoffman elongating her voice in a way that would make Bikini Kill and Bratmobile proud.
The title track is odd and unexpected. It has a slowed-down grunge riff, reminiscent of Mudhoney’s Every Good Boy Deserves Fudge, or Nirvana’s Bleach, or even early L7, and the sprawling line ‘Cosmetic’ washes the wall of West Coast-inspired distortion. Then the edgy post-punk guitar snakes its way through, and the squealing futuristic synths kick in as they sing: Cosmetic I am a slot machine Cosmetic Your own American Dream

It’s a takedown of sexism. The heavy riff fades out to be replaced with clean post-punk jaggedness, and then the riff comes back in. It is a slur against all those who reduce women to objects. A bloodshot city that never stops looking, doesn’t know when to sleep. It’s the kind of city women worry about, but Nots reclaim that space with their frenetic entangled noise towards the track’s end. It clocks in at 5.33 minutes, the second longest on the record. As they scream cosmetic and aesthetic they are dissecting the terms that still define women in media. What they look like, what they wear on their skin. ‘No Novelty’, their short punk banger, follows on from this, and deconstructs the idea of the all girl band that limits so many musicians. It’s under two minutes and is a noisy rant – if you would rather call them an “all girl band” than a punk band, you better get out of the room fast.

Depression is not a subject they shy away from either. ‘Inherently low’ is well, inherently low. There is eeriness here but also a gloating about this inner state – they do not want your pity. The fuzzed guitars together with the pounding headache bass create an energy that is juxtaposed against the bleak lyrics. Nots seem proud of their lowness, because at least it’s not a fake smile.

In recent interviews the band have talked about the strange effects of endless touring. As well as being exposed to music they wouldn’t normally listen to, such as long psychedelic albums, Hoffman states, “a lot of the songs were written while I was staring out the window riding in the car… seeing America in such a particular way’ and Fluroscent sunset is plainly one of the songs that came out of that experience. The guitars are tinny, jarring, like artificial lights. Is the sunset real? Is it day or night? Are they traveling or are they standing still? Hoffman sings about staring into the sun, which is actually a TV screen. And Lones turns up the bass, like a sunstroke migraine.

Closing track ‘Entertain Me’ is the longest track on the album, and influenced by some of those sprawling psychedelic albums the band got exposed to. It has a country twang opening, believe it or not, and the sound of soaring wind. Then the drums speed up and it’s back into punk territory, with Eastburn making the synths warble like unhinged spines. The song deconstructs into a mess of guitar noise and the chant “Entertain me, tell me who to be”. It’s reminiscent of Nirvana’s sarcastic line “here we are now, entertain us” and Sleater-Kinney’s caustic “If you want to be entertained, please look away, please go away!”

Entertain is a dirty word in the punk rock dictionary, and Nots remind us why. The repetition works well, playing off the repetitive effects of advertising and media. The song ends with the lines “I paid for truth, I paid for you”, which is foreboding. Could they be referencing the rise of Donald Trump? They are certainly calling out capitalism. Each rendition of ‘Entertain me’ has more sneer in it – Nots sound like they are going to spit on the face of your TV. The guitars are like a sequence of scratches on a blackboard. Nots themselves are like a long scratch against the face of apathy, and their courage to be sinister and confrontational holds up well.

One Response to NOTS – Cosmetic (Goner): The Analytic Approach