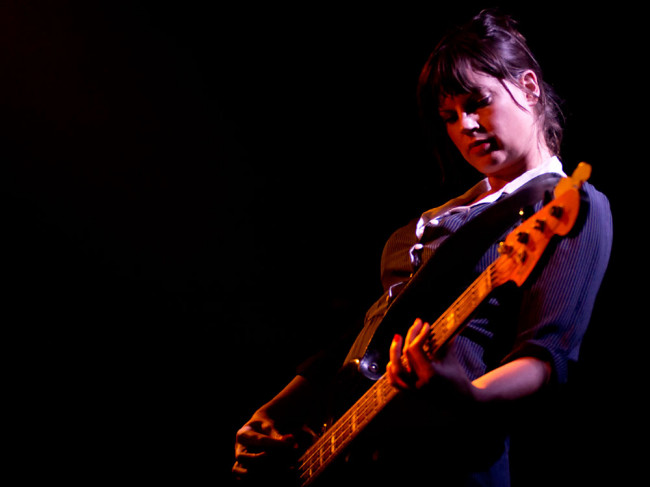 One of the many things I spend far too much time thinking about (I really should write a list and see if there’s any consensus or if it’s just me) is the ‘side project’.  It’s funny how musicians all have ‘projects’ now.  What perplexes me as a non-musician type (well, I can bash out a few chords if required and playing drums along to Beatles Rockband on the ol’ PS3 gave me so much joy that one of the days I should think of starting a ‘project’ of my very own) is how this impacts on the main ‘project’/band.  I get that it’s fun to play with other people outside your main gig but it does make me wonder whether it causes self-inflicted pigeon-holing of the main ‘project’/band.

One of the things I like most about a lot of the bands I’ve ended up liking is that they’ve often strived to progress and not make the same record too many times but if you have ‘side projects’ does this mean that the main band doesn’t progress as much as it should?  Do bands and projects become creative outlets for a single type of sound or style? If you want to go and do something different, is it something that’s kept to one side for the ‘side project’?  Let’s take the Beatles as the obvious example.  The Beatles in 1969 didn’t sound like the Beatles in 1962 and over those 7 years they achieved a ridiculous amount of progress and changes in musical style.  What would have happened if they’d decided that the Beatles should just stay as the skiffle band they started out as? “You want to go and write some Dylan-esque acoustic songs? Keep it for the side project”, “Backwards guitars? Tape loops? Side Project”, “Look George, that sitar stuff is nice and everything but it’s not the Beatles is it?”

I try to avoid arguments about what era of Pink Floyd was the best because one of my favourite things about them is that there were maybe five different Pink Floyds over the lifetime of the band (the Syd Barrett era, the post Barrett 1960s era, the classic 70s era that gradually morphed into the Roger Waters dictatorship and the Gilmour-led era for the last few albums).  Take XTC. Or Led Zeppelin. Even U2.  Maybe U2 are the classic example of this; the same four guys for the last 40 years (even if their 21st century output has shown them to be having an extended crisis of confidence about the band they want to be).

Anyway, back to Song of the Day and todays is the new one from Tropical Fuck Storm, the new(ish) ‘project’ formed of Gareth Liddiard and Fiona Kitschin from The Drones, Lauren Hammel from High Tension and Erica Dunn from Harmony. Once upon a time they might have been termed a ‘supergroup’ but I don’t think you’ve been allowed to use that word in music journalism since the 1980s.  Having written above about progress, if you like The Drones, you’ll love ‘You Let My Tyres Down’. It’s features a lot more of what you’d expect from a ‘typical’ Drones song (as much as there is one), more so than the band’s previous single, the claustrophobic ‘Soft Power’, which has so far managed to alienate enough people on YouTube to currently have more thumb down dislikes than positive reactions.

‘You Let My Tyres Down’ has Liddiard’s unmistakable voice, guitars that wouldn’t have sounded out of place on The Drones’ Wait Long by the River or Gala Mill albums, and the female harmonies that have become more common place on The Drones’ more recent album.  Liddiard has long been Australia’s supreme lyricist, and once again he manages to explore the dark heart of Australia, a subject matter that few others are prepared to take on.  Once again he manages to do it with his typically brilliant imagery.

Not sure about the fade out out the end of the song though.  The song deserves a better ending.