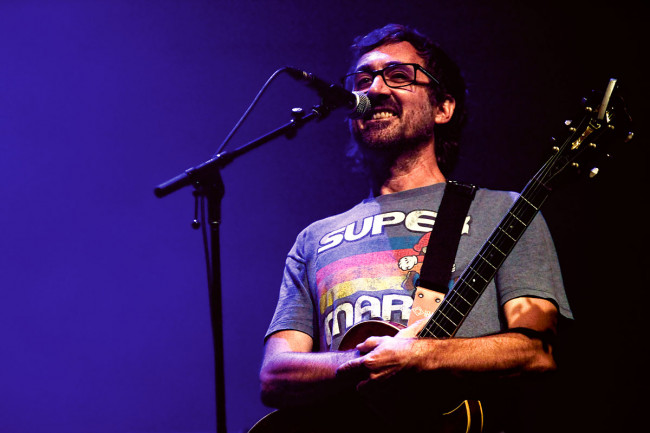 It’s starting to get biblical outside, real Old Testament. Roads are already beginning to close, meaning that a different route from what we’d normally take needs to be taken to get into the city tonight. The rain is already so bad but we forego parking in the underground carpark next to the venue just in case it floods and instead park at the top of a large hill nearby.  Although we are only going to be out for a few hours, there’s already concerns about the drive back home after the show. Over a period of four days Brisbane will receive in the region of three-quarters of its annual rainfall.

Inside the Princess Theatre, Brisbane’s newest venue, you wouldn’t know what’s happening outside.  The thick brick walls and windowless auditorium block out the external world.

I’m not going to lie, but it is disappointing to find out that Grace Cummings and her band haven’t made the trip up to Brisbane to be tonight’s support act.  This was someone I was really looking to finally getting to see play live, hopefully it won’t be too long until they make it to Brisbane for a show.  Despite this disappointment, Mckisko more than makes up for it.  Although I saw her a couple of weeks ago play with Mick Turner under their Mess Esque guise, I think the last time I saw her play solo was a good few years ago at Sonic Masala, playing the Bar Stage of the Greenslopes Bowls Club. These days, everything feels like it happened a good few years ago.  As good as the Greenslopes Bowls Club has been as a home for always awesome Sonic Masala, the Princess Theatre and the acoustics of the venue are so much more a fitting stage for McKisko.  You can’t hear the torrential rain outside and inside you could hear the proverbial pin drop as she plays.  No one wants to break the spell. I don’t think I’ve ever heard her sound as good as she does tonight.  I can’t even remember if she introduces herself, other than to let the audience knows that she was a very late replacement (I heard that by the afternoon of the show, there was no one scheduled to open the night) and to explain that it was such a rush that she forgot to bring any albums with her.  A small tragedy, as she would have no doubt have made a pretty penny at the merch table after the show.

“Me and the lads,” as Gareth Liddiard describes Springtime during their set.

Chris Abrahams sits behind his baby grand piano on one side of the stage. Gareth Liddiard stands on the other side, having swapped out his more regular Fender Jaguar for a cherry-red Gibson hollow body.

Centre stage is given to Jim White.  I’ve written previously about if I had the chance, I’d go out every day of the week to watch Jim White drum.  Thanks to the Covid twist of fate, I’ve been lucky to see him play twice in the last five shows I’ve been to, albeit over a period of two years: as part of Xlouris White supporting Bill Callahan back in 2020 and now tonight. I’m still kicking myself for not going to see a show on his tour with Ed Kuepper, missing out on seeing two of my very favourite musicians playing together.

Getting to watch Jim White drum, it’s very easy to forget everything else going on.  It’s a performance in its own right. It’s like watching sleight of hand magic tricks and trying to work out what is happening and how it’s happening.  There’s something almost lackadaisical about his style. At times it just looks like he’s setting up, getting ready to drum. Throughout he regularly plays with one stick, while his other hand is inspecting another drum stick, as if assessing its worth, which end is the right one to use, whether it’s the right tool for the job. At other times, he’s using this same spare hand to adjust his kit mid-song. When he combines it all with his high arcing, exaggerated arm movements, it’s like watching musical Tai Chi. If you Google Jim White, it returns two entries on Wikipedia; Jim White (musician) and Jim White (drummer). There’s something mildly offensive about that as Jim White (drummer) is so much more than a simple percussive beat maker or a basic time and tempo keeper.  During songs like ‘The Island’ and ‘She Moved Through the Fair’ the musicality of White’s drumming is stunning. You realise that he knows every inch of his kit, he knows the exact sounds he can get and which end of the stick he needs in his hands to get that sound. It’s an absolute pleasure getting to watch one of the truly great drummers and it only reinforces that thought that I would go and see him every night of the week if I could.

As is always the case, Liddiard is a first class raconteur. Introducing tonight’s first song, ‘Jeanie In The Bottle’, he explains that his Leeds-based uncle, the poet Ian Duhig, wrote the words and adds that “Leeds is a shit hole.” Anyone familiar with Liddiard’s interviews might start to think he has issues with Yorkshire. He further regales the audience with stories about buying Taliban merch from a reporter friend and how walking around the airport, he was called out more for not wearing shoes than he was for wearing the aforementioned Taliban branded clothing. “Who gives a fuck about shoes?” Civilised people, Gareth! Is it a surprise that people at the airport were telling you to put some on? The thought of dealing with airport escalators barefoot makes just about anyone’s blood run cold. Or walking into an airport toilet or using the plane toilet while not wearing any shoes, it doesn’t bare thinking about. And don’t forget Gareth, this is people from Queensland telling you these opinions.

Springtime work best in the quieter moments, when you have the clarity of what each member of the band brings.  As the album-length songs are extended in the live performances and crescendos reached, the drums and guitar tend to dominate, meaning Abrahams’ contributions are get lost in the mix.  When the guitar takes over, the subtleties don’t come through. It’s a surprise given how good Liddiard normally is with volume and noise.  It’s the same with Liddiard’s voice, with his lyrics going astray as the volume increases. This could all be the result of the lottery of a seated venue, perhaps the mix is better towards the back of the room, nearer the mixing desk.

When it does all come together, with Abraham’s effortless piano, Liddiard’s ever-passionate vocals and Jim White’s sleight of hand drumming, Springtime is greater than the sum of it’s parts. At those times when the cacophony goes into the red, and the some of the intricacies get lost in translation, there’s still Jim White to watch and admire, truly one of the great drummers.

As Liddiard points out early on, this is only the band’s fourth show. The future is exciting.