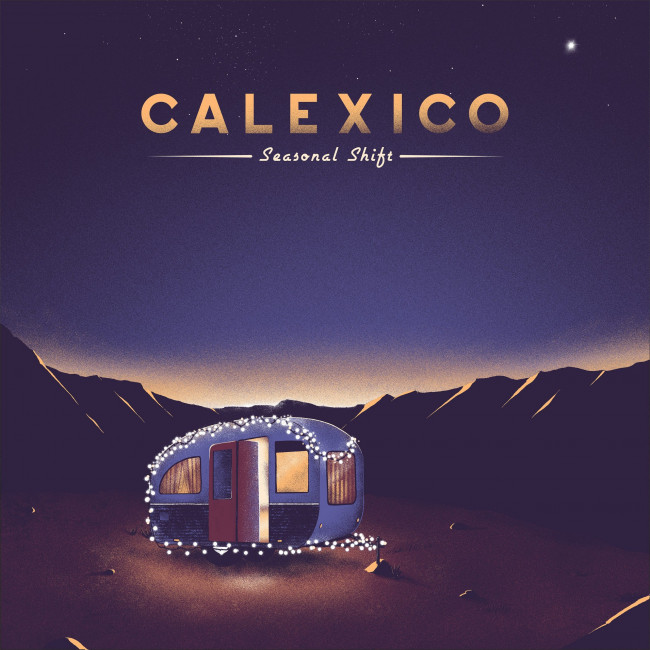 Let’s get it over and done with – 2020 hasn’t been a great year. Thank goodness for all the musicians of the world who’ve kept making music throughout this unspeakable pandemic. As most couldn’t travel and haven’t been allowed to play live, at least technology has enabled digital recording and sharing, and live streaming performances.

As usual my faves, Calexico, have been generous in spirit and offering. The guys in the band may have been isolated across the US and beyond, but they’ve still written, recorded and mixed a new studio album, Seasonal Shift, just in time for release before Christmas.

Seasonal Shift, is a holiday album. It snuck up on everyone, musicians and fans alike. Co-founder of Calexico, Joey Burns, recently moved from Tucson, Arizona, to Boise, Idaho and his long-time brother-in-music, John Convertino, lives in El Paso, Texas, some 1,200 miles away. I asked Burns how the new record came about – “Our record company in Europe (City Slang Records) suggested to do a song for the holidays. Once COVID-19 hit, they suggested doing an EP of five songs. We got into the creative process; those five doubled, especially since we were all staying at home. Tracks starting flying back and forth.”

The Tucson-based Sergio Mendoza drove north to work with Burns, while other band members had to stay put. As Burns explains, “I recorded in Boise with Sergio, and sent tracks to everyone else all over the globe.” This made the creation of this album a kind of long-distance chain letter – an idea sent through cyberspace, morphing into something more expansive with every recipient’s addition. Many guest musicians contributed, some past and present band members, some from other bands near and far.

It’s true I’ve been a bit of a Grinch this year (but hasn’t everybody?) so I was slightly in trepidation of saccharine Christmas songs you hear playing through crappy speakers on high rotation at the supermarket or the mall. I needn’t have feared: one glance at the beautiful album cover – an indigo Tucson evening with a compact, retro caravan bedecked in lights – and I was reassured it was never going to be jingles and sleighs and ho ho hos. To me, the cover embodies the recent downsizing of our lives, holding sacred the joy of local holidays with the nearest and dearest (*I feel less of a Grinch already).

But Seasonal Shift is not just about Christmas, it’s far wider than that. Just as the band have always cherished multiculturalism, so too does this album encompass many more celebrations and traditions. Opening track, ‘Hear the Bells’ is an evocative song that Burns says is “..about holding time and space for memories… giving importance to memories too”. Those memories can be anyone’s, perhaps longing for people and places, missing the ancestors, reflecting on life’s best and worst times. Very apt for this year of separation and restriction.

‘Heart of Downtown’ is unmistakably Calexican. Burn’s familiar minor guitar riff leads into percussion from Convertino and Mendoza, which at first seems to reincarnate the old gem ‘Quattro – World drifts in’ (Feast of Wire), but it grows into a different cool-catchy, almost middle-eastern melody, which I love.

Burns and Convertino have both created a solo song for the album, “Each of us in our garage or home studio room. A portrait. Raw and incomplete…” Convertino’s ‘Glory’s Hope’ is an eerie and beautiful instrumental moment, which he described as “This gorgeous 6/8 haunting shuffle that feels both icy and warm at the same time. How did he do that?” Answer: the Maestro.

Burn’s portrait is ‘Peace of Mind’, a cruisy ‘60s lo-fi ballad, oozing great sweetness and reminiscence of simple life and sticking close to loved ones. Slow dance with your other half in the dark. If you’re lucky enough to own an old Chevrolet, cruise on out to a scenic spot and cuddle up on the benchseat.

Three covers round out the novelty of this album. John Lennon and Yoko Ono’s much loved ‘Happy Xmas (War is Over)’, and Tom Petty’s ‘Christmas All Over Again’ are nods to some of the guys’ musical heroes. ‘Mi Burrito Sabanero’ by Gaby Moreno, and featuring her, is destined to be my daughter’s holiday earworm. It’s also reprised as the outro with messages from everyone involved in the album, including friends and family. Such a generous gesture.

In a year that’s been so catastrophically life-changing for so many, take some holiday cheer and grab a copy of Seasonal Shift. If you love your music, and are missing live music, as I am, remember all the bands who continue to do it tough in the northern hemisphere winter and keep supporting musicians, both local and abroad.