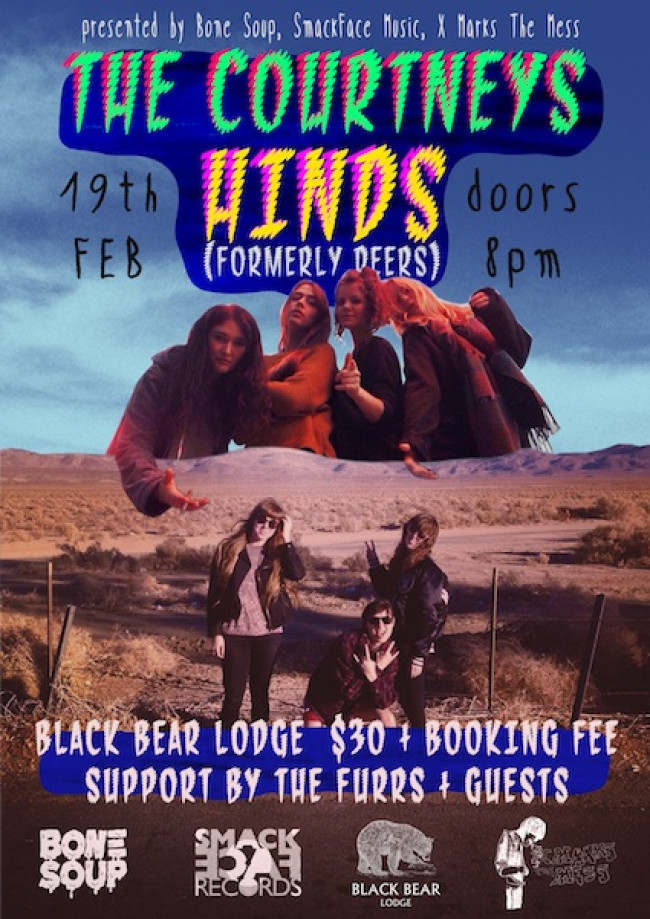 When it rains it pours. It’s one of those nights where Brisbane’s already marginal music vote is split, a full card of candidates rolling into town and setting up their soapboxes on opposite street corners. The elder axeman, the emo-glam queen, the scrappy next-big-things. Not to mention the cyclone bearing down. “You’ll do the review for this one right?”, says Everett as he dons his hat and shoots off through the rain to see the queen.

We’d arrived to see locals The Furrs start off like a David Lynch scene: the singer’s back in front of a red curtain, snare crack as she whips round to deliver the first sultry line, lipstick in closeup, slow zoom out on a blues band. They bring weird, outsize charisma to their small stage and old genre, especially singer Gabriella, who at one point busts out the most gin-you-whine blooz instrument there is: the kazoo. Now we’re talkin’! Fantastically, they’re not the only band to play it tonight. When it rains, hey?

Hinds (SPN). They were called Deers, now Hinds, and you’ll be hearing the name again. I’m not the first to tell you but it bears repeating. What you’ve heard is pretty damn charming:

…but that was a duo and you’ve gotta hear the way the band plays it. It LURCHES, it SWINGS and GRINDS, it SHUDDERS stop, you peer over the edge and at each other for a weightless age, it DROPS, it SPEEDS, people SCREAM. We’re talking Breeders levels of queasy joy, with impish grins and banter to match. Monkeeing around. They’ve got songs to spare, the ones you know and plenty you don’t, like the final number that probably doesn’t, but sounds like it does and might as well, chant “GABBA GABBA HEY!” for a minute or ten.  Both crowd and band are stoked, laughing, we picked a winner. When it ends I text a glowing review to Mr True only to look up and find him at the foot of the stage, bone-dry and smiling.

Here’s the one with the kazoo.

The Courtneys (CAN) can’t be judged on their song titles alone: ‘90210’, ‘K. C. Reeves’, ‘Lost Boys’, sure, but this ain’t no chillwave. The sing-song gang vocals are straight from the beach but there’s a solid drive to this music, over the brackish river and onto the sunbaked highway. Endless road songs.

Maybe that’s why, as bassist Sydney tells us, they find themselves posting a lot of merch to Australia. There are certainly some giddy fans here tonight, reeling around the room in the dark like kids on a rainy day while the band stand mostly still in magical three-piece formation, drummer Jen taking lead vocals for maximum symmetry in the swirling din. But we could be anywhere. And if anyone here is like me then as fresh and exciting as The Courtneys sound, they’re speaking indie rock Esperanto*, tapping into an outernational happy place. This is loud, warm, fuzzy shelter from the storm.

* I wanted to go cold turkey on referencing other artists in reviews (yeah I already mentioned the Breeders but they’re different) but The Courtneys’ presser mentions Oz legends Eddy Current Suppression Ring and NZ’s finest Flying Nun, and that got me thinking: something great happens when North American groups claim that stuff, right? Pavement, Yo La Tengo, The Courtneys… or maybe it’s just me?