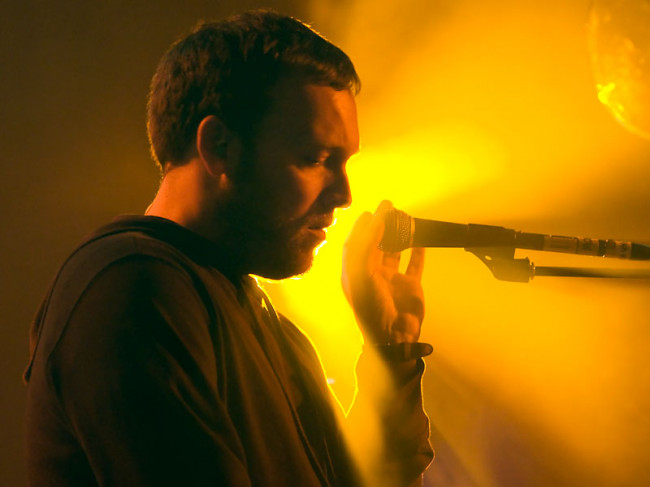 Taking time out from rehearsals for a live TV performance – “I can’t tell you what the program is as we’ve signed a form that says we can’t tell anyone” – Collapse Board talks to Mogwai’s Barry Burns about the band’s latest album, the score to the sci-fi/crime drama, KIN, and some of the other soundtracks they have been involved in.

Looking back at growing up in the UK in the 1970s and talking about it with others who went through it, there’s a sense of a shared generational trauma, one that was beamed straight into your lounge room every day through the TV.  From watching Doctor Who from behind the sofa, to creepy TV show themes, to dark series that dealt with environmental disasters or the end of the world, any number of public safety adverts that are horrific even watching them almost 40 years on, being a child of the 1970s scarred you for life.

Posing a first question to Mogwai’s Barry Burns as to what was his first memory of the connection between music and film, I naively expected him to respond with something like a John Williams score or one of Vangelis’s early 1980s soundtracks, Chariots Of Fire or perhaps even Blade Runner.  Something ‘cool’, something classic. Or perhaps just Queen’s Flash Gordon songs.

I didn’t expect him to respond with a couple of 1970s memories that I’d largely repressed.

“Do you remember that really sad English film, Watership Down?” he asks, as if that was something you had seen as a child and could ever forget. “I was really young and my parents took me to see it, and at the end I stood up and cried when they played that Art Garfunkel song ‘Bright Eyes’.  The terror of it all! My parents thought this was hilarious and they took me back to see it the next day!  Can you believe that?” he laughs.

Amazingly ‘Bright Eyes’ (backed with ‘Kara’s Theme’, if I remember rightly) was the first 7” I was ever given, a birthday present from my sister via my parents.  The first piece of music I ever owned.  It didn’t have a picture cover and I can still see the orange/yellow label (Sire?).  “That’s amazing!” Burns responds as we share our Watership Down soundtrack memories with each other.

But he isn’t finished with the impact 1970s soundtracks had on him.  “Another one, is the theme music for the Incredible Hulk, the 1970s TV series.  I remember not being able to sleep and walking out onto the landing and hearing this really sad music.  I think my parents were crying and not being happy.  It’s one of my earliest memories about music.”

Fast forward to 2018 and Mogwai have just released KIN:  The  Original  Motion  Picture  Soundtrack, tracks recorded by the band for the score of the forthcoming sci-fi/crime drama, directed  by  Jonathan  and  Josh  Baker and starring  Jack  Reynor,  Zoë Kravitz, Carrie Coon, James Franco & Dennis Quaid.  Mogwai became involved in writing the score as the film’s directors were long-time fans of the band.

“It was lucky because we were between tours although we had to leave working on it to go off and do some one-off shows.  It was lucky as we’re often asked but can’t do it as we’re on tour or working on our own music,” Burns explains. “They [Jonathan  and  Josh  Baker] were very hands on and wanting to be involved in the music so you use your translator to try to make something to mean something,” Burns explains.  “It did get really stressful as you try a lot of stuff and there’s a lot of back and forth.  You write a lot of music and send it off to them and they don’t like it, they come back with what they want to change.  Sometimes there might be one thing is a week that they like.”

The process of creating a film soundtrack is very different from the way that Mogwai normally work when writing their own albums, with the band having to take on board external influences and having to be prepared to compromise in order to ultimately please a client.  “Working for films is a lot more prescriptive,” Burns says.  “We don’t have one person saying “Do this” and the QA [quality assurance] about what we do is always within the band.”  But the directors don’t have the final say,” he continues, “Surprisingly it’s the producers and it’s interesting to see the hierarchy of the film industry and how that works.  You have to compromise, you’re just part of the machine but the directors feel like that as well.  The producers are really in control of the whole boat.”

Discussing some of Mogwai’s previous score and soundtrack work, it quickly becomes clear that there is no standard approach to writing music to be used in the film industry.

Whereas KIN’s directors had a very hands approach to working with the band to develop the soundtrack for their film, when they worked with Scottish artist Douglas Gordon, the director of 2006’s Zidane: A 21st Century Portrait, he took completely the opposite approach, leaving the band very much to their own devices with regard to the music they developed.  Gordon’s film is a real-time documentary filmed using 17 synchronized cameras, focused purely on French footballer Zinedine Zidane during a single match between Real Madrid (Zidane’s then-team) and Villarreal played in the Spanish La Liga in April 2005.  “For the Zidane film we tried a lot of stuff,” Burns says. “We’d written a bunch of music so we said let’s make music that goes along for different speeds and elements and pick them to fit with the film.  We did have some old demos that we used and looked to improve on for the film,” he discloses.

Mogwai’s adventure in the film industry have also seen them work with some established and acclaimed names in the soundtrack world.  The band collaborated with Clint Mansell and Kronos Quartet on the soundtrack to Darren Aronofsky’s The Fountain in 2006.  Although first (and possibly best) known to the generation to which Burns belongs as the singer from 1980’s Greebo band Pop Will Eat Itself, Mansell has long established himself as a composer in the film industry, regularly working with Aronofsky, including the soundtracks to Pi and Requiem for a Dream.  Thinking it though, Burns considers that the band didn’t really pick up any music-related pointers for providing scores for the film industry.  “We were hired to play his music,” he notes, ”So we didn’t really learn about writing a score for a film.  We learnt about the process of doing it and how many people are involved. To be honest,” he then admits, “I’m not sure I enjoyed it that much as I wanted to be doing it by ourselves.  I just thought “We should be doing this.””

More recently Mogwai co-wrote the score to Fisher Stevens’ 2016 documentary film about climate change, Before the Flood, with Trent Reznor, Atticus Ross, and Gustavo Santaolalla also involved.  Again this was a different experience for the band.  “There was a wee bit of collaboration between us and Trent and Atticus but we would send them stuff and they would re-record it so it ended up as a weird remix of our music.  It was all over the web though, we didn’t get to meet them while this was happening.”

Despite the success the band have had for their soundtrack work in more recent times, one of Mogwai’s earlier forays into the film industry didn’t work out exactly as planned.  Mogwai’s 2008 album The Hawk Is Howling includes a number of songs for a failed film venture by the band.  As Burns explains, “Some of our songs were on the film but we saw some emails that we weren’t meant to see saying that they didn’t sound like Mogwai songs. John [Cummings], our old guitarist who used to be in the band wrote back in anger and of course we were sacked,” he laughs.  “But it didn’t put us off working with the film industry.  I think we realised that we needed to play the game,” he contemplates.  “We did an EP a few years later and one of the songs has a really stupid name [‘Stupid Prick Gets Chased By The Police And Loses His Slut Girlfriend’ from 2008’s Bat Cat EP] that was named after one of the scenes in the film,” he adds.

Looking at the Mogwai’s output and touring schedule over the last few years, it appears that the band are working harder than ever.  2014’s Rave Tapes album was followed by the Central Belters compilation, celebrating 20 years of the band in 2015, the Atomic soundtrack and Before The Flood songs in 2016, 2017’s Every Country’s Sun, and now the KIN soundtrack in 2018.  The recorded music has been accompanied by tours and festival appearances and all the hard work and time away from home (Burns splitting his time between Glasgow and Berlin when not away with the band) is not lost on the band.  “We have been talking about it as I don’t think we’ve had a proper break for about 4½ years.  Time’s almost moving faster than ever and I think we have been busier than ever in these last few years”, he notes.  “There is a definite scramble for work with the music industry being as it is now.  Selling records won’t sustain you as a semi-successful band and I do feel sorry for a lot of bands that are just starting out now, he adds.

Mogwai’s 2018 tour dates included shows in Sydney, Melbourne and appearance at this year’s Golden Plains and Perth International Arts Festivals.  It didn’t go unnoticed for those of us living in Queensland that unlike other tours, the band didn’t make it to Brisbane this time.  “We love playing Brisbane, we’ve got some really good friends there who take us when we’re there so it was a real surprise we didn’t go this time.  It’s pretty sad, I don’t think we could a promoter to arrange a show there,” he explains.  “But we always have great shows in Brisbane and we’ll have to try to get back there next time,” he adds.

Looking to the future, 2019 sees Burns reach a personal milestone in celebrating 20 years with the band, with Mogwai reaching their 25th anniversary in 2020.

“I’m sure there’ll be a tiny firework but probably nothing of consequence, Burns says when considering next year’s personal milestone. “My first day was in Tarbox Road Studios when we were recording Come On, Die Young.  There’s a chance we’ll be back there next year to doing some recording with Dave [Fridmann] so that’ll be good,” he confesses.

Contemplating what the band might do to celebrate its silver jubilee, “How can we cash in!  It’s got to stop!  One of us I’ll die!” Burns laughs.  “We were talking about it the other day actually.  Alex Mackay, who tours with us and plays some of the guitar and keyboard parts I can’t play, is only 24.  We were talking about how we were like that one day.  Now those 6am flights kill you!”