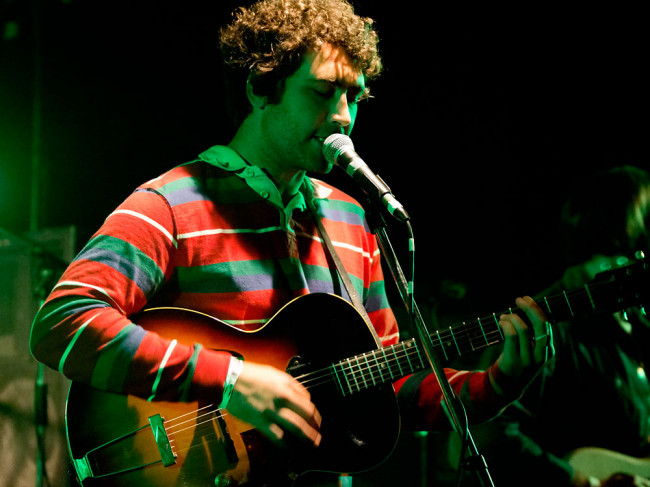 Relative newcomers to the Brisbane music scene, psych pop outfit Nice Biscuit were on hand to open the evening. Live they may not cut psychedelia in its purest strain, but there’s an undeniable pull to the funk-laden pulse and intuitive pop flourish underscoring the six piece’s sonic concoctions. What really pushes the group forward is the magnetism of their performance. They turn out their dance-friendly set with infectious zeal.

Kicking off their Australian debut with effortless west coast jangle, The Allah-Las follow on. With Brisbane as the first stop on tour, the L.A. group bristles with an enthusiasm which seems to feed through to their music. “It’s been a long time coming Australia, but it’s good,” frontman Miles Michaud exclaims. The four piece’s juxtaposition of impudent garage sonics with mellowing atmospherics and hypnotic gauzes of layered guitar noise elevate their sound to something more than clinical revivalism. Slowly building momentum the group breeze through the set, their music constantly informed by reverence for ‘60s sounds. The crowd’s warm reception makes clear it’s a passion they also share.

‘Follow You Down’ from second LP Worship The Sun comes as an unexpected crowd favourite. An energetic flash of economical garage psych, the song is powered via a chaotic fusion of fuzz tone licks and bouncing rhythm. A slowly pooling euphoria ensues as the set progresses, resolutely inching toward critical mass.

The perfect blends of tension and emotion on ‘Tell Me (What’s On Your Mind)’ and a fair few others culled from the group’s 2012 debut sit at the undisputed heart of their performance. This material seems especially potent, eliciting something special within the audience. Hypnotic momentum washes over the crowd they sway and falls into each other’s arms. After a coyly pre-emptive conclusion, the group return to the stage for a twangy suite of encores. As the crowd roars for more the four seem content moodily riffing to cool oblivion.