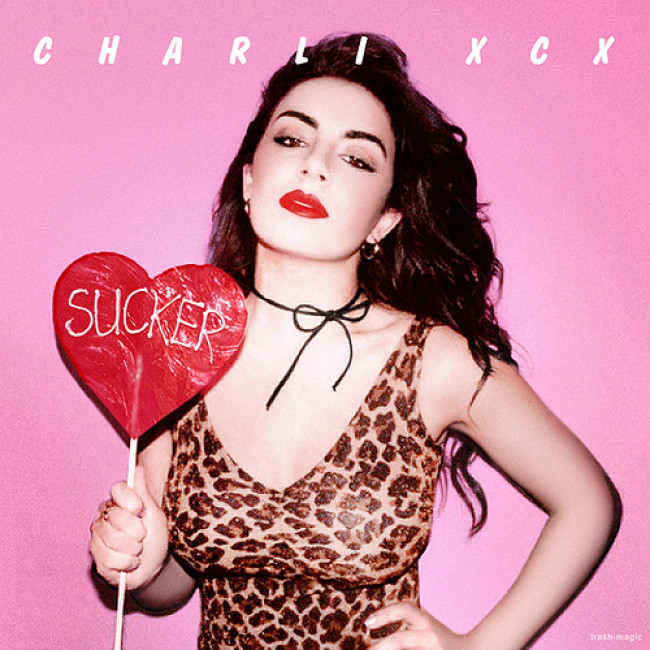 I’ll also admit that, the third time I chugged down Sucker (for that is indeed how you consume Charli XCX – bottle held high over yr lips until you’ve drained every drop, then tossed afterwards at someone’s head), I binged the next day on second- and third-wave post-punk. The Twilight Sad to Lowlife to Editors. A reflex. A corner. Darkness as comfort. Over-the-top isolation to counter the crowded rooms and cocktail parties.

The whole of Sucker has that flash-bang blur, no corners to hide and cry in, just spotlights and camera flashes and confetti and fast convertibles. Like Sky Ferreira, Charli positions herself as the naughty one – breaking rules, skipping town, crashing parties. See, though, Sky sounded scarred – either that, or she could scar us (to paraphrase a quote from Scott). That was why we loved her, because she shuddered in the limelight. None of that with Charli – behind that glamor and glitter is rippling muscle. No withering. All firm stance. The sheer force attracts me, but once I’m looking in, I can’t see much besides reflections on the surface.

That opener, though? Oh, man. C’mere, Charil – let’s dance. Right now. “Sucker” gets down to business, with proper strobe light riffs and massive “woo-ooo”s in the chorus, and that essential query – “Do you get me now?” There’s no turning back from here – if the bouncer doesn’t nod you in here, consider yrself bounced. To “get” Charli, you have to drop any thoughts of “artistry” or “authenticity” or, indeed, any thoughts in general. Doing things yield pleasure. And if you can’t feel pleasure, then why the fuck did you come here?

Once you get that through yr thick skull, then the next three tracks just click. “Break the Rules” and its runway Britney Spears strut; “London Queen” and its runaway “Oi!”-studded pop-punk anthem; the chummy singalong “Breaking Up”. For a lifetime introvert, it feels a bit like I’ve met the flashy new friend who wants to show me around the New York nightlife in a limo. And OK, as long as you’re not shoving champagne under my nose, I’ll roll with it.

Problems emerge once we bump up to “Gold Coins”. The leisurely snap beat is unmistakable; the canned Green Day-ish mega riffing is inexcusable. Seems Charli grabbed Lorde’s “Royals” and turned it inside out – rather than digging into a private, soulful space and eschewing status signifiers, she’s cranking out how much she wants to swim in it. This isn’t just thievery – it’s sabotage, gleeful and deliberate. Where Lorde rejected wealth and bucked the system, Charli is buckling in, and that disappoints me.

From there, the LP begins to fizzle. “Boom Clap” trades in the rock costume for something more shimmery, something safe and syrupy where the girl assumes that clingy, whinging, make-me-feel-complete role, and Charli never quite reclaims that duel-on-the-dance-floor verve –

Except on “Body Of My Own”. And this merits discussion.

On the surface, it seems like she’s taking a punt at feminism – “got my darkness / I’m into myself / don’t need you / cos I’m gone”. The SNES fanfare (to be exact – Super Mario Kart, Battle mode – yeah, THAT fanfare) supercharges the tune throughout; pouty bass lines beef up the charge; and Charli spins through the verses with fevered sass. For a second there in the chorus, the tin-can-xylophone and pentatonic riffage has a whiff of appropriated Eastern flair, kinda like Head on the Door-era Cure or a Pretty in Pink Furs – but it’s far too overblown and assured to draw those lines in thick.

Anyway, what’s she saying here? One couplet suggests suicide – “Got the gun in my hand and it’s pointed straight / To the target I’m gonna blow my brains”. Another openly mentions heroin. And other lines imply that the protagonist can fulfill her own sexual desires. “I can do it better when I’m all alone.” It’s all a very selfish feminism, if that indeed is what she’s touting – the notion that she’s free to abuse and amuse herself doesn’t really empower anyone else outside of her pseudo-serious lyric…or does it?

I’m grappling with this. Grappling its throat. I can’t decide if I approve of this kind of independence, boiled down purely to a sensual independence. No matter that a girl can prove her own intelligence, or earn her own wages, or assert her own needs – just “your sex is so over”. Part of me says it’s too simple, too self-serving. Another part of me is thinking – well, that I’ve been toying with that idea, too. That is, if you can just scratch that itch to fuck, then sex itself becomes obsolete. That doesn’t help in any public domain, but when you live alone in a room with a twelve-foot-tall ceiling, and you’ve weathered out your young adult life without a partner for this long, the loneliness does creep in, and you begin to wonder – am I missing something? Charli says yes, but look – you can do it better when you’re all alone. It’s a different type of strength, but a valid one nevertheless. Thanks, Charli.

Here. Let’s watch her sing this one live.

What, ho! Five more tracks, you say? No. Stop. Cut that mess out. Finally, Charli, I had you in a corner, talking about something larger than yourself, and then you run off back to the boring non-stop party-crashing. I thought we could be friends. But the Joan Jett impression on “Hanging Around” is rather flat. And please spare me the Fun.-like balladry of “Die Tonight”. Besides, we know you don’t mean it. You’re not going to die. Not here, anyway.

Sigh. By the end, Sucker’s just another disposable flight of fancy, another lusty babe swigging booze and gunning the top of the charts. One gutsy kinky loop-de-loop that really hits home, and the rest just ordinary bids for the record-buying public’s attention. Fun for a while, but hardly the lasting fascination or frayed nerve that Sky pulled off on Night Time, My Time.