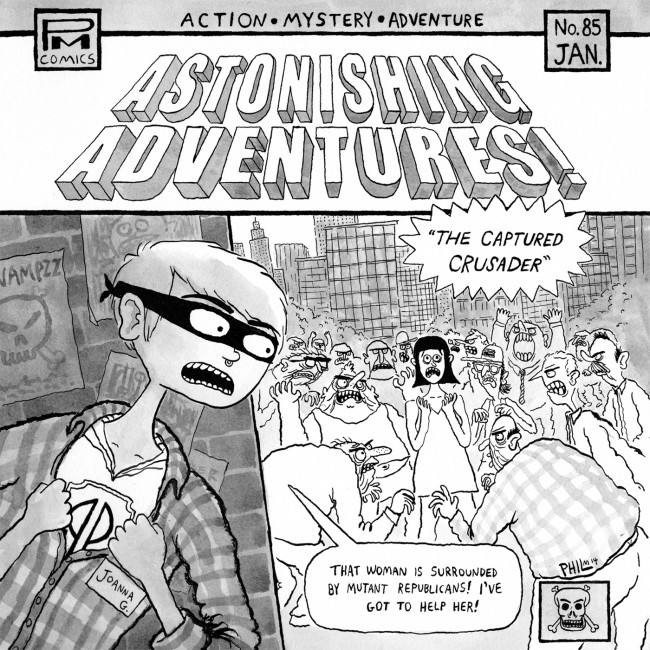 Stop. Breathe in for four counts, hold for two, out for six. Repeat until you’re calm enough to lay the ad hoc dagger on the table.

a) Trust Fund outclassed Joanna Gruesome on their previous split. The latter stuck to their discordant guns and handed in three tracks that could’ve easily been shuffled into Weird Sister. Their partners, however, snipped dainty little paths around the old indie pop formulas, and turned in a beautiful roadmap for converts to trace with shaky fingers. Yes, the Trust Fund side is more twisty, nuanced, and dare I say mature, even though they have zilch of a history on the interwebs.

b) Perfect Pussy’s last LP is truly horrible. There is no redeeming quality in the excess feedback squall, the incoherent vocals, the muddy guitar fog. What distinguishes this from any other amateur snotty punk band with a male lead? And if you answer “that three-and-a-half minute lull on ‘Advance to the Real’”, I’d say, “uh, dude, that’s a three-and-a-half minute lull.” As far as ambient passages in punk rock albums go, I’ve heard better. (I will admit, though, that the drifting synth meltdown “VII” at the end of the album reaches a compelling climax. Maybe Perfect Pussy should transition into a Cabaret Voltaire-styled terror vessel of rundown electrical equipment and ditch the whiny guitar feedback shtick.)

And see, this spilt delivers more or less the same song-and-dance from both parties – which we might forgive the double-P for, them being new on the shelves and all. But the Gruesomes had a whole damn year and then some to ruminate where they’d go after wooing the press, and we’d all hoped (“we” being two people) they’d turn a sharp corner (as they did on that lurvely Galaxie 500 cover) and escape the journos that pinned ‘em down with their Sonic Youth-meets-MBV-meets-Swirlies tags. They should know better by now.

Right. That’s it. Humdrumness established. Let’s not stab any further into the patchy writing stints or mismatched comparisons, shall we? Trust me – I’d love to. Right to the heart of the matter.

But deep breaths. Leave the dagger on the table. The utterly non-evolved, forgettable nature of the tunes should damn both sides enough. Time to grow up and move on, everyone.

EDIT – I’ve been informed recently that PP slipped out an EP in the meantimes. In some ways, I’ll admit the blokes and the gal improved somewhat by writing a few melodies. But the same complaint arises – if Meredith values her words, why doesn’t she bring them up front instead of burying them in the overall riffage of her band? The muddiness still sounds amateurish, like a bootleg of a Husker Dü cover band’s first sound check. Please clairfy, m’dear.