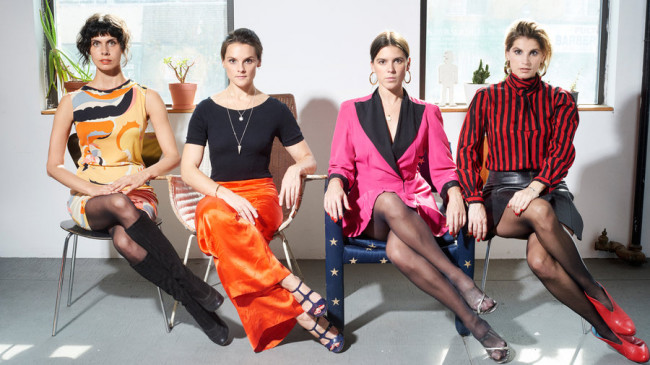 Above: The righteous and super-smart TEEN. Photo by Hannah Whitaker.

I had a very dreary introduction here when I started writing this article. It involved despair about the US, physical and mental fatigue from my job, more despair for the UK, and similar nagging thoughts. I tried to deny the purging effect that music can have on my mood – the ascent from the mundane to the universe where songs live, a universe far greater than mine – tried to write it off as mere diversion.

But no, we are wiping that slate clean. For I realize now that I write what I write because music brought me INTO the world, not out of it; and more than ever, I am driven by the need to communicate, to extend beyond the self, to praise what moves me and to shoot down what doesn’t, because THAT is how I stay in this world. Without these dialogues, I will fade.

After much deliberation, I’ve whittled down my first list down from 16 albums to 12. Unlike previous years, I’ve also grouped and ranked my selections into four tiers. I’ve also added links to lengthier reviews by moi whenever possible.

Here’s a few albums that break molds and rise above the pack, yet haven’t quite stuck with me as the rest have. Orchestra of Spheres certainly unleashed one of the most impressive debut albums I’ve heard all year, full-formed voodoo that bobs and weaves in the bush with David Byrne.

I stumbled on The Poisoned Glass in Atlanta – I was on an errand in a bike shop, you see, and wound up chatting with this very friendly clerk. Told him I’d recently bought a Terry Riley CD and he went bonkers – you know that feeling, when you meet someone who has the same secret deep obsession as you – and in time he wrote down the name of his band on the back of a business card. Months later, the name pops up again on Drowned in Sound’s weekly album list. Cinematic death metal, let’s say. Dirges for David Lee Roth’s funeral. I referenced Bernard Hermann in the review, if that tells you anything. Brilliant, is what I’m trying to say.

You probably know Pikelet better than me, if you’re part of the Australian constituency that still reads this blog. Me, I knew of Evelyn Morris, but hadn’t kept tabs on her musical output. Stupid me. Tronc is a lovely thing, effervescent and intimate, snippets of Broadcast and Pram and Morris’ own muse flashing from its many facets.

And then on the opposite end of the spectrum, bashing its way across metal chambers and cackling with glee, lies Guerilla Toss. Eraser Stargazer batters and bruises with oblique funk, shatters and splatters with enough blunt force to subdue even the most seasoned of punks. And me, I thrive off blunt force trauma. In music, anyway. Put down that hammer.

[After some days of deliberation, I deleted the 3rd tier, “Mild Adoration”.]

In this tier reside the ones that held my heart longer, or at least evoked physical reactions such as crying, dancing, and leaving the house.

TEEN hit me by surprise. I had no clue such a formidable girl gang existed, nor that they could summon the kind of charming and witty synthpop that endeared me to the 80s back in college. Throw in the rallying lyrics about reclaiming feminism and defining the self, and TEEN had me hooked. Not to mention, yes, they’re the ones that sent me prancing all over the room, like a giddy little girl jumping on her mum’s bed.

I have to thank Hannah Golightly for drawing me to Skating Polly. Had it not been for her delightful interview with the sister duo last year, The Big Fit would’ve slipped entirely past my radar. I still marvel at how the two can slip like quicksilver from cathartic bloody RAGE to the sweetest spun hard candy imaginable. “Pretective Boy (sic)” is so damn perfect that I cry whenever it rolls around in my car.

Funny how many first encounters this tier contains. I hadn’t met Emily Rodgers, either, until a presser from a trusted source delivered Two Years. Few records from this year have drawn me in so completely, have offered such glistening weaves of web to immerse myself in. Time slipped by like shadows while I wrote this SOTD a few months back. Perhaps Kramer’s genius has something to do with it. But then without Rodgers, that genius would have never been applied.

Now, Witching Waves, I’d met before. As a fiend of the UK radio waves, I can sometimes grasp gleaming fish from upstream, though often they slip from my mind’s clutches. Such was Witching Waves, splashing and silvery on Fear of Falling Down from last year; but ah-ha! now the fish catches the fisherman this time, and I flap and flounder in the wake of Crystal Café. Consequently, the band swam to these shores many weeks back, and I caught them not once, but twice, in two cities. If you’re reading this, guys, I apologize for my coyness, my squirming, my inability to form many sentences around you. Perhaps I’m the fish, after all.

As the construction of ranked lists often go, I shuffled names around in the bottom two tiers for some time, debating the merit of each, musing whether so and so deserved praise from our illustrious site or not. But as to the top four albums – the ones that stayed in the car the longest, the ones I clung to during the reviewing process because I did not want to stop reviewing them, the ones that gave me the courage to navigate the hell that is Atlanta traffic – I had no doubt which ones would break the top. It’s true, Eureka California have the hometown advantage, but never mind that – if anyone in ATL’s miserably cheery pop punk scene can be half as essential as Eureka C, I might go out to shows more often.

April was entirely devoted to Future of the Left. There was room for nothing else. I am exaggerating, but only slightly. If time is not linear, then the facts are contestable.

The other two demand some elaboration. Readers with elephant memories might recall the Dog Chocolate riot I shared on CB a while back – well, even if you didn’t, I sure as hell did. So when their new album popped up in my inbox a few months back, I sprung at it – and, thank God, the blokes were just as mad and silly as ever. For fans of amateurs, surrealism, and unadulterated fun, Snack Fans is that burst of salty crunchy goodness that you can’t put down in one bite. Like Pringles, yeah. But without the calories, just all the crumbs, in every cranny of your car.

And then there’s the Gotobeds. Kudos, first off, to that Joe Casey dude from Protomartyr for his brilliant bio, or otherwise I wouldn’t have even bothered with ‘em. (Writing matters a lot to other writers – go figure!) ”THE GOTOBEDS? I THOUGHT THEY WERE KNUCKLEHEADS!” was the turning point for me – well, that and a brief allusion to Swell Maps. But yeah, those guys do not disappoint. They’re coming to the ATL this month, and I cannot WAIT to pop up in the front and yell back all their lyrics at them.

There are a few titles coming up that I’m really keen to rave about, but can’t yet. Either I haven’t heard them yet – hullo, Deerhoof and Weaves (the former is my fault for not getting in touch sooner; ah well, let’s just support the band and actually buy it) – or I have heard them, but can’t say anything because they’re not out in the general public yet, save for a few key singles. Which is sad, because Lakuta is hella fun to dance and sing to, and if I could I’d dance and sing its praises right here and now. Rattle already has ET’s stamp of approval – duo drumming rituals by candlelight! How wicked is that! But now, keep yr eyes peeled for MJ Guider – that slow motion reel is comin’ sooner than you think.

And finally, last but for the love of god not least, come the singles and EPs section, because a few of these did completely blow my little mind this half-year. If you haven’t heard Massive Attack or The Veldt’s comeback EPs, then get out there and download or else illicitly stream some stuff. Roots Manuva and Young Fathers slay any skeptics on the former; and gosh, I can’t even begin to euphemize the kind of orgasms that the latter gave me. Swoon.

Ahem. Then there’s Nachthexen, the baddest synth punk vixens in Sheffield, and their “piss-yellow” single. Vital howls and ravings. Big ups to the Audacious Art Experiment for including them on the label’s annual compilation – here’s hoping that a full-length is in the cards. And do I need to say anything about 50 Foot Wave? No, I don’t think I do. Rock on, Kristin.

Finally, here’s to Floating Points, for following his dreams and becoming the big-time composer he always wanted to be. And, y’know, for writing extraordinary, prismatic soundscapes and whatnot.

Phew! That is what it is, ladies and gents. And do stay tuned in six months’ time (no sooner) for the full shakedown, which no doubt will be just as scattered, or at least inspired, or at the very least worth yr ears’ time.

3 Responses to Driven to Tiers: Lee Adcock’s Best-Of-So-Far List for 2016