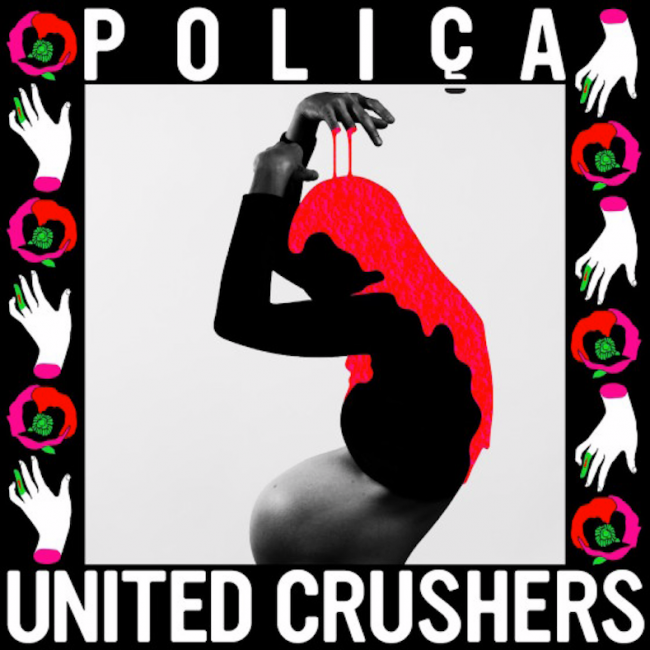 An article in The Guardian recently posited the question “where are all the protest songs?” with the inevitable lamentation of an apathetic generation of music makers following suit. Whenever this statement-in-a-question is posed (because, really, it’s a thinly disguised criticism of modern music), it is a puzzling thing to contemplate. Especially considering that Beyonce’s large-scale protest song ‘Formation’ staged at the Superbowl happened last month, it is a more puzzling statement still.

Take Minneapolis-based indietronica trip hop group, Poliça. The group preceded the release of their third long player, United Crushers, by stating that it is: “heavily political and deeply personal with thick references to social injustice, self-doubt and isolation, the rapidly increasing urban decline in gentrification, overcoming music industry machinations, and finding true and honest love in the wake of it all.” Now, that’s a pretty tall order to fill, but I think this could safely be considered an album thick with protest songs.

Following 2013’s Shulamith, the quintet returned to their home base of Minneapolis, Minnesota and took an extended break after two years of nearly non-stop touring. During that time, Black Lives Matter began to take hold across the modern American psyche, and controversial social and political upheaval began to broil, the likes of which have not been seen since the Civil Rights Era of the 60s. After white supremacist gunmen opened fire during a Black Lives Matter protest, their city erupted in riots.

During this time, vocalist Channy Leaneagh decided to have another child. Her pregnancy, paired with the current political climate, prompted her to examine the world awaiting her children. This balance between excitement and trepidation, optimism and cynicism informs their latest offering from start to finish.

‘Summer Please’ features heavily distorted vocals reminiscent of Planningtorock, which lend a sense of gender ambiguity. They repeat “It’s all shit” before Leaneagh’s vocals take the lead. The R&B sensibilities that characterize Poliça’s sound make their appearance as Leaneagh repeats “I’ve got mine / I’ll be fine” in a self-reassuring mantra. The slow-building dance groove segues into the dark, broiling nocturnal hues of ‘Lime Habit,’ ushering in a more overt trip hop soundscape that Poliça have now finally allowed themselves to display: a long-overdue evolution that suits their distinctive style to a T.

Stellar track, ‘Fish on the Griddle’, anxiously frets over friends who never call and image versus reality. Leaneagh’s vocals are barer now than ever before as she evocatively declares: “you see me on the stage and you think I’m strong / but I’ll be your fallen star”…“I’m crumbling down and you’re so wrong.” The unexpected post-punk bass on ‘Berlin’ shakes up Poliça’s oeuvre substantially, providing enticing glimpses of what the group have up their collective sleeve.

More is at stake on this album than on their two previous offerings. The songs are more dynamic and engrossing, and this newfound variety is a welcome relief from the relatively standardized efforts on their previous two albums. While Leaneagh still relies a little too much on vocal distortion, it is nice to see her step out from behind the scenes, putting her naturalistic voice more prominently on display. There is a notable evolution both stylistically as well as sonically that has allowed Poliça to burst free, taking a giant leap up in their game. With such a specific – at times static – sound, it is a welcome relief to hear sounds that are more palpable, allowing an element of vulnerability with a definite pulse. While not all of the songs are readily apparent as protest music, they deserve a closer, more contemplative listen that could very well lead you to thinking more about where each of us stands in a world that still produces protest songs vital to our present day circumstances.