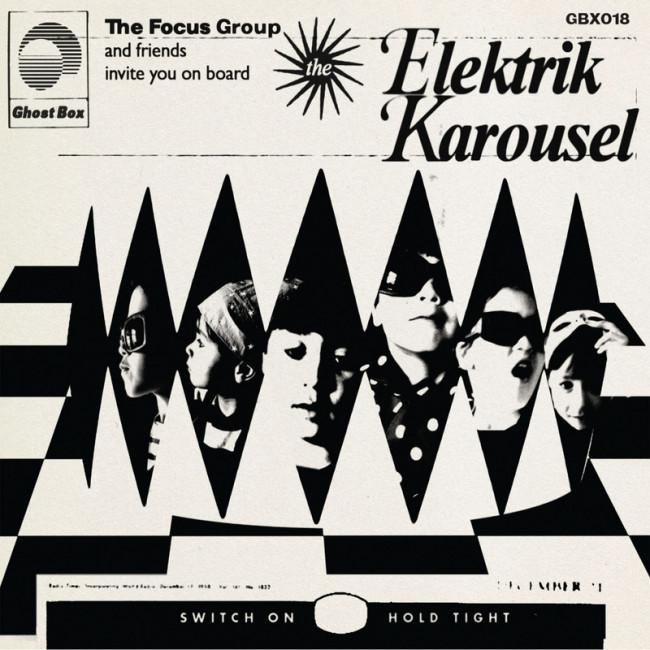 There’s a song on here called ‘The Elektrik Karousell’. That’s with one more L than the album title. Why the L not, right?

There’s this thing in the south — if you’re driving through a rural town and you see a place called Kathy’s Kountry Kitchen or some similarly 11th-letter-of the-alphabet-alliterative sign, it’s meant to signify a meeting place (past or present) for the Ku Klux Klan. So it cracks me up a little there’s a song called ‘Kinky Korner Klub’ on here.

Not that I think The Focus Group are Klansmen. I’m just picturing a termite-infested sign out on Highway 10 with Kinky Korner Klub written on it in barely legible red paint and smiling.

It’s another Ghost Box release, not different enough to shock anyone, still playing with scratchy/reverbed woodwinds and music box sounds. It both benefits and suffers from what I call The Hauntological Tautology — using sounds from the past will evoke all kinds of deep nostalgic feelings in the listener because the sounds remind them of their past, which is always filled with deep nostalgic feelings.

Like of course you’re going to be feel something. It’d be impossible not to. But, you know, it’s not that different from watching old commercials on YouTube.

The human brain is pretty much hard-wired on an evolutionary level to romanticize the past. It’s a survival mechanism, one of those things that keeps us going forward into the scary future. Our brain tends to ration out traumatic memories strictly on a need-to-know basis.

So nostalgia’s a pretty easy sell. It worked for Ronald Reagan; it works for sports teams. And it’s worked, to a certain extent, for all the Ghost Box folks. Even the title traffics (or traffiks, if they prefer) in nostalgia. Elektrik Karousel as opposed to say, Alton Towers. Or EuroDisney.

But you know what? When the final project is this beautiful, a moving collage of frequencies and sound placed together in all kinds of cool, unexpected ways, none of that stuff really matters. It’s always important to be aware of the ways in which you are being manipulated, especially when some aspiring assemblist is going to take this deceptively simple formula and try to run with it.

Every note of the six-minute ‘The Magic Pendulum’ is stunning — impeccable juxtapositions perfectly placed. All I care about is does the art evoke, does it move me, does it make me feel, and The Focus Group does that all over the place. It’s not the sounds so much as the textures, which are basically auditory hallucinations. Put this in your headphones and go sit in the woods (watch out for the bugs/snakes/ticks — nature is dangerous). The Elektrik Karousel is as good as mushrooms in its ability to highlight and distort, to warp space-time into all kinds of peculiar intricate shapes. It’s cheaper than drugs and better for your long-term health. Let’s go get fucked up on The Elektrik Karousel.

Just remember what I said about Hauntologies and tautologies. Romanticizing the past can be dangerous.