The return of Everett True | 150. The Vanilla Milkshakes 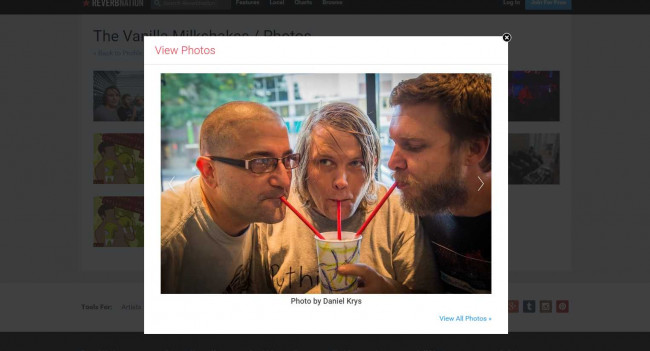 Here’s how it works. Grab my attention, and I’ll listen. Ten seconds, that’s normally all I need.

How to grab my attention? I couldn’t say, and even if I could say I wouldn’t say cos that’d just be dumb and then there would just be some other whole new way of grabbing my attention in its stead.

My attention was grabbed earlier today by a band on Twitter called The Vanilla Milkshakes. They’d Tweeted a recent Sub Pop purchase. Thus.

So I reTweeted it. That’s how it works. Thus.

So they Tweeted me a couple more times. Thus.

So I made a mental note to give them a listen later on. So I did.

Let’s switch back to the present-day. The following is lifted from their ReverbNation site – where you can download 23 tracks of FUN FUN FUN! Punk pop lo-fi distorto type fun. Fun on the beach type fun, and fun dancing round the empty streets of Olympia fun, and fun we don’t care if anyone else thinks we’re cool we’re going to have fun anyway type fun for free, and look at some photographs and a video too.

The following is their biography, with a few comments added by me.

I guess, but that’s put me off them right there. Pur-lease. (They don’t, either.) I’m guessing Accordion Crimes is another band featuring The Vanilla Milkshakes or a local band, or both. Probably both. And probably raw punk. Turns out I’m right. Ish.

The band has just finished a new record with Calvin Johnson of K Records and Beat Happening and mastered by Jack Endino of Nirvana’s Bleach and most of Incesticide (he said we won’t win the volume war but we’ll have fun doing it! 😀 ). The digital and vinyl releases is coming soon later this year.

Well, there’s a recommendation right there. Go to Calvin. Go to Jack. Absolutely. Honoured to call them both friends. Always been honoured to call them both friends. Got to say, The Vanilla Milkshakes sound way better on this album (How to Ruin Friendships and Influence Deuche Bags) then on the previous one I briefly listened to. This one strips away the bad rock and replaces it with openness, a sweet raw edge that reflects the group’s love for open-throated punk-pop harmonies and slightly oblique, loser lyrics. Pretty much most this new album is lovable, same way Pansy Division or Hunx And His Punx or Lurkers or Frumpies are lovable. I’d especially recommend ‘At Odds With God’, ‘Idiot Colorado’, ‘You’re Not Cool’, ‘Kreep’ and ‘Seattle’. Plaintive.

Also we have been officially nominated as one of Denver’s best post punk bands by the Denver Westword for the 2015 Denver Westword Music Awards and will also play it! 😀
The Vanilla Milkshakes have also just been added to the Denver Post’s Underground Music Showcase (UMS) this year!
Happy awesome good times! 😀

The Vanilla Milkshakes are a grouping of three studly nearly middle aged men who sing and play instruments. Sometimes they do it in tune and a melody is born. Something like that. Reproductive health was never this biographer’s strong suit.

Beautifully put. What more do you need? Beautiful brutal honesty. Give me that any fucken day over reams of purple prose about shit that goes absolutely nowhere.

Singer / guitarist David McGhee was born in Florida and lived in the south eastern regions of the US until he was eighteen when a family emergency brought him to Denver, CO. He remembers the first thing he saw when he got into town was a huge gay phone sex hotline billboard. This was miles away from the Bible belt of Georgia and Alabama. Here he could start seeking his identity.

Oh man. Poignant. Reminds me of some of the stories I loved when I was a kid.

He started playing guitar and singing after seeing the music video for The Offspring’s “The Kids Are Alright.” He formed a few bands that focused on his music that sort of stagnated in-between inconsistent gigging and heroin abuse and quickly faded from existence. After seven years struggling with nearly daily suicidal thoughts and urges, severe depression, homelessness, the law and heroin abuse until he was about twenty six and was diagnosed with Aspergers. It was then that everything began to make sense.

I love this.  Not the crap daily suicidal thoughts and homelessness and all that, fuck no. Just the part where it begins to make sense. (This band are already like 3,000x better than anything The Offspring have even dreamed of, but respect to them for providing motivation.)

With therapy based around logic that autistic people can grasp he has made leaps and bounds and the guy who once tried to kill himself over 20 times now can’t get enough of life.

Fantastic. I went on meds recently. All of a sudden, I can sleep through the night and don’t have to keep deleting emails every few seconds. One day soon I’ll be able to see “new message” sign without thinking something terrible’s going to happen. (It’s one reason why I use Facebook so much: I can’t stand getting emails or phone calls.) They ain’t entirely good, fuck man I still can’t stand the idea of going outside to an unfamiliar place, but. I love the “therapy based around logic that autistic people can grasp” line. Oh yes.

“It’s trippy to be alive…” David says now “you could have been born a gnat and only have existed for only a few days and then gone forever. Never another chance.”

After meeting boyfriend / drummer and vocalist Frank Registrato (jam scene favorite Bonobos Convergence / southern soul Universal Recording act St. Francis) on an online dating site in late 2013 and basically saved him from a life of bed bugs, violence and drug abuse. David moved in with and is now being cared for by his percussionist friend. With his life in steady order it was just a thing of getting back into music. The opportunity came when Frank’s other band’s guitar player (of local Denver reggae band Highline) JanKarl Hayes said sure. Why not? Let’s all form a band! So he hopped on bass and it turned out the dude could sing really freaking well. With all three singing there are some awesome harmony opportunities.

The Vanilla Milkshakes are not about perfection. Even the sourest note can be refreshing if it adds life to the song. The band’s debut album “How to Ruin Friendships and Influence Douche Bags” was recorded in an astonishing 17 hours (13 less than Nirvana’s debut) at Denver’s own Uneven Studio by Bryan Feuchtinger.

Oh wait. So this ISN’T the one done with Calvin and Jack! Whoa. I sure have some great shit to look forward to. Nice work, Bryan.

Since becoming a band the response has been just so awesome. They are truly the pictures of gratitude and can’t believe things are going so well. After a lifetime of suffering, David McGhee finally has a life to be proud of.

They are a great all American band and an example of unpretentious music for pretentious people.