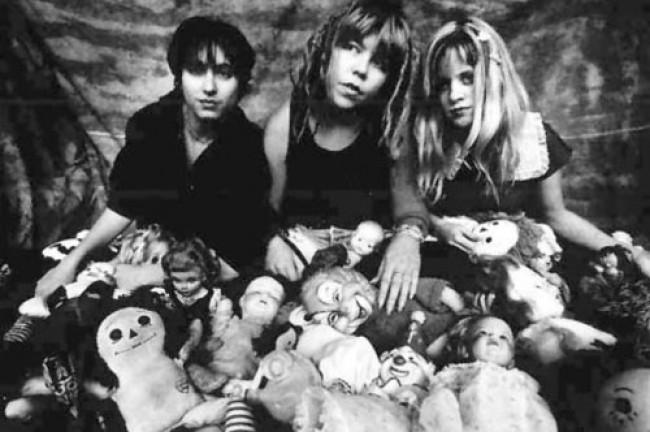 Seven months ago, I asked folk to provide their favourite three Babes In Toyland songs. Many did. Perhaps more than I expected.

There seemed nothing for it but to make a thoroughly scientific chart based on the results. So I did. And then I completely forgot about it.

Bonus points to Joseph Kyle for getting there before I did with his three choices – ‘Burn Black’, ‘Retard Girl’, ‘Dicknail’.

All the following words are mine, except where noted.

So we’re running and gasping and we’re running and gasping and we’re down on our knees because we’re running so hard.
The half-full whiskey bottle hadn’t smashed the window of the quiet house when we threw it. It had bounced off and landed in the front garden, unharmed. We hadn’t stuck around to watch, though: we were already out of there and scampering fast, back through semi-lit rain-soaked suburban streets. We ran and ran, choking back our laughter and the thought of the looks of blank bemusement on the faces of the few stragglers left awake at the curtailed party we never made it to, our knees scraping along the ground because we keep falling, over and over again.
“Why…did…you…do…that…? Kat splutters out the words, clutching my arm for support. “We have nothing to drink now.”
“Ow!” I yell, feeling the bruise on my arm where she’s punched me. Kat sings lead with this fiery, brutal furnace of a Minneapolis drinking band. The music she creates makes me want to bludgeon heads against walls. She offers me her sleeping bag to share when I leap into their van without even a change of underpants, and calls me a fox when I come to her with girlfriend woes. “You’re a fox, Everett,” she says, regarding my clinking overcoat pockets with wariness. “You won’t have any problems.”
Problems, I wonder. What are these, I think to myself, too drunk to even pretend to care. I ask her if fox is a term of endearment or a mid-Western insult when applied to men.
She just laughs. (excerpted from The Electrical Storm, unpublished)

The band I loved more than anyone in 1990 was Babes In Toyland.

Everything I understood to be important about rock was tied up with these three women. Kat Bjelland would stand there on stage, face contorted with fury, spitting out her love-hate lyrics over a battered guitar lick. In her flat heels and chiffon she had an odd girlishness: pseudo kindergarten curls, crudely bleached, tattered baby doll dress, red lipstick and wide eyes. Her legs would be covered in bruises by the end of each show from contact with the guitar, pain dulled by a constant stream of whiskey. (excerpted from Live Through This)

“Spanking Machine is one of the most genius records ever made,” Courtney raved to me in ‘92. “It’s all truth and coolness and acid trips, bad acid trips, and lies, lame ass Minnesota boys and cut open sores and cheap wine and Valentine’s Day and old stinky nighties with no boyfriends and loving Nick Cave and loving Butthole Surfers and harsh winter and cool kitty-cats and feeling like the only fucked-up girl in the world, oh and a few of my lyrics, but no big deal, it just makes it better.” (excerpted from Nirvana: The True Story)

What makes a babe? You gotta be cool, brattish, friendly, American, dorky, together, fucked-up, female and aware of your own potential, yet also aware that other people aren’t and don’t like being reminded of the fact. Hardly any women are babes, yet all babes are women. Babes rank above foxes, chicks, ladies, girls (how appalling, how patronising, to be thought of as a “girl”!). Almost all babes play in bands, though I can think of a couple of actresses as well. Babes are way cool.

Their obvious role models are Babes In Toyland, the band that first gave solid shape to the term. The Babes (as opposed to “the babes”) are all of the above and thus it can only follow that they make the coolest sound around, simply by giving full expression to their personalities. Lori, the brash, loud one, everyone’s favourite sister, holds down the drum stool and jumps up at the end to take everyone’s photo to make them feel more a part of the party. Michelle adds the thrust, the aloofness, the mystery. And Kat… well, Kat adds the electricity.

It’s no accident that Kat dresses the way she does – always in chiffon, in flat heels that accentuate her girlishness, her babe-like qualities, but which never lead to men considering her a “sex” object, whatever the hell that is. And it’s no coincidence that most of her words come out as soul-searing screams or five second blasts of lucid hatred. The past, y’see, has every bearing on this band. Right now, I almost feel obligated to talk about Kat’s past – about how growing up as the child of archetypal Sixties American hippies whose real-life mother would beat her and fuck her around would alter everything – but I don’t wanna go too close to the truth. So let’s talk about Madonna instead.

The Babes are the flipside to Madonna’s all-conquering power trip, her ability to mould men as and when she likes into her image. Only the Babes approach it from another direction altogether, using darkness and torn emotions and fucked-up imagery and every rotten mean trick in the book. Or, rather, Kat does and the others temper it, make it palatable. There’s a balance to this band, y’see, and without it they’d tumble straight into the giddy chasm that’s already made folk like Lydia Lunch impotent as far as the outside world’s concerned. But then, she’s not a babe.

Right now, I bet you’re wondering why I haven’t lapsed into my usual barrage of superlatives. Hey, I was just getting ready to do that: just getting ready to talk about how my chest is one sticky mess of tormented emotion after hearing Kat wrench those words out, ill and sick as she always is, during “Catatonic” and “He’s My Thang” and “Vomit Heart”, say. But I wanted some truth in here as well. Beauty, remember? (excerpted from a live review in Melody Maker, 21 July 1991)

When I first experienced Babes In Toyland, I tried to explain their dissonant surge in terms of Ut – but soon realised that beyond the two bands’ beautiful, scaly noise there really weren’t that many parallels to be drawn. (Review of Ut reissues, from Plan B Magazine #13)

Tell us about Babes in Toyland.

Jack Endino: A fun time. We did Spanking Machine in about four and a half days. Kat would just scream into a mike, one or two takes. They were very efficient.

She wouldn’t get drunk first or anything?

Jack Endino: No. I don’t think so. I don’t remember her getting drunk or anything. People were usually on pretty good behaviour in the studio because they had to record quick. which meant they couldn’t screw around. I don’t think I even remember Kurt drinking a beer. How do you do a record in three days if you’re fucked up? You don’t. That’s what people do when they have months to record. I don’t remember Babes in Toyland doing anything particularly unusual. They were very intense people. Kat’s a very intense person, she was very serious, and Lori was delightful, Lori the drummer, she’s wonderful, and Michelle was very low-key. Their van was funny. They were touring in a van. It didn’t smell like a boy van. I stuck my head in their van and it was all these curtains and little pillows. They were good and they played really well, they recorded basically live and then we went back and did the vocals just the way everyone else did in those days. Spent no time at all on the record. (unused interview for Nirvana: The True Story)

“First of all, what’s it like being an all-female band?”
“Lori, what’s it like being a girl?”
“I love Kat and Michelle’s tits just as much as I love my own”
“You know, when we’re in New York, us and Dickless and L7 all sit around and go, ‘yeah’ together.”
“YEAH!”
“And we all get our periods at the same time.”
(Melody Maker interview, 22 September 1990)

There’s a girl on the stage. Big cow zombie eyes. Face like curds and whey. Albino hair, with a little-girl fringe. Her lipstick is inches thick, not smeared, but ready to be. Her guitar playing is grating, frantic. The drums are clattering, crashing, arhythmic but inevitable, like a dropped alcopop bottle careening around the top deck of a bus.

The girl twirls around on the heels of her granny shoes. Drops her top half forward so her hair hangs low, obscuring her guitar. Snaps up straight, hair splattering across her back. Grimaces into the microphone. Squeals. Howls. Screams.

The girl – Kat – is mesmerising. She looks defenceless in her baby-doll dress: big lacy collars hanging down; a child’s hairslide at hertemple; sturdy lace-up shoes at the end of skinny legs – and then she starts to sing. She contorts her face, whispers, girlishly: “Vomit. ..my. ..heart… “then bellows, eyes popping: “PULL MY LEGS APART!”

Her howl is abdominal, abominable. She’s not vulnerable. She’s possessed.

(excerpted from a review of The Best Of Babes In Toyland And Kat Bjelland by Miss AMP, Plan B Magazine #4)