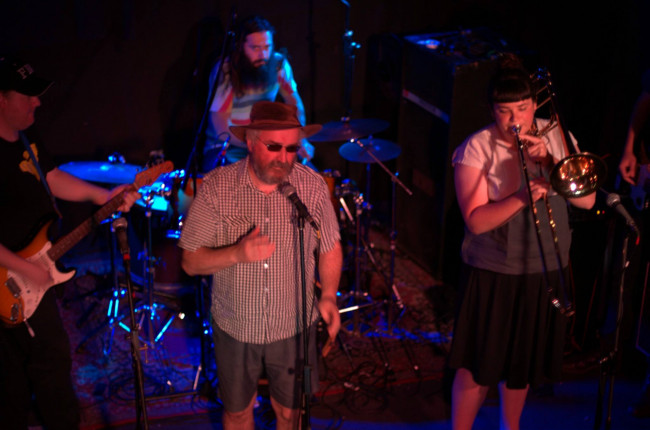 When I arrive home later than expected, Charlotte (never refer to someone as “my wife”) asks how my set went. I can’t recall. All I have are blurred snapshots, the colours bleached out. Drunken sea shanties and a trombone that sways and blows merrily. (No, not merrily.) When I go LOUD third song in, it seems to count for something. (Someone walks up to me after and asks if my “Liars” refrain is inspired by Campbell Newman. I shrug and say it could have been, but really it’s a reaction to everyday life, the adult world.) Swearing. Laughter at truncated endings. Most words I grab from the past but try to make relevant to the present. Every moment matters. (You’re on stage, why wouldn’t every moment matter?) One good one-liner  – “People say that breaking up is hard to do. They’re fucking lying.” The harmonies are discordant and oblique; the guitar scouring; the rhythm section gels magically but never boringly. I feel so proud, that such talented folk want to play alongside me. ‘Streets Of Brisbane’ reinvented for another long hot summer settling in. The anti-love song (they’re all anti-love songs). The one where I pretend I’m Yoko Ono. The one where I pretend I’m still singing in a choir. The one where I ask to be hurt by “a girl in a leather skirt”.

Afterwards, around five different ladies tell me (separately) they are all my new Number One fan. I’m not even aware five people are watching.

As ever, surprise is expressed that the band haven’t even met each other before today. Bright sun outside, scorching.

I don’t really watch The Formaldehydes: a female drummer singer. Space, fussy guitar noise and a theatrical voice that partway disconcerts. I am reminded of the early Eighties – agit-punk, posi-punk – but as I explained to Dan Cross everything falls back to the early Eighties.

Let me step outside this review for a moment. it’s sunny. (Of course it’s fucking sunny.) I’m sweating slightly, feeling crap. Just wasted 20 minutes trying to upload some out-of-focus photographs to the WordPress server, and gave up in disgust. The taste of almond and cornflake is in the mouth, the taste of defeat. I’m scrabbling around for words to type, capture the moment. Words always fail me, always. My only real knowledge of Brisbane band Wonderfuls is the singer likes to drink, and is way smarter than he’d probably prefer. Thinks too much. Their music is minimal, isolated, beautiful: the acrid smell of failure. The early Eighties: Kevin Hewick, Anne Clark, Eyeless In Gaza, Durutti Column. Silence as music. Clutches at the microphone than a decomposing lifebelt. But we’re outside the review, remember? So the sound in my ears is Mariah Carey’s ‘All I Want For Christmas Is You’ because it’s about as far removed from Wonderfuls’ stark, drawn-out loneliness as I can currently get. The isolation is brutal. There are keys, arpeggios. The hurt lingers. The hurt always lingers. I don’t know if it’s just me, but I can feel the hurt and isolation in that Carey version so keenly it fucking destroys me.

I watch Scrabbled. So fucking seeping and weeping humanity it makes me embarrassed for every band that doesn’t. A Brisbane band from the underground who embody Brisbane. A bass sound that cuts through my ears like so much useless furniture. Lyrics spat out like sunlight. Harmonies teased like ribbon. Fury and friendship and sadness and hope. Isolation.  Fury and forensics and laughter and lust. Bek paces up and down in front of her band, relentlessly. An underground so secret that not even the underground know they exist: and so beautiful, so aware, so beautiful.

Scrabble, dudes! I have a New Favourite Band in Town. This next song is everything I fricking love and adore about anti-musicians who still insist on clambering up on stage: sardonic and simultaneously vulnerable. Observant, painfully poignant. Basic and chugging and rudimentary and with the odd hammering on the doors of the Temple of Noise. Harmony, because why the fuck not? This, to me, is David Bowie riding out with the stars. This, to me, is Kate Bush swooping through the lower echelons of motherhood. (Song of the day – 556: Scrabble)

My photographs wouldn’t have added anything: just pissing at shadows.

Let me step outside again. Melbourne four-piece Secret Valley recall some of my favourite moments from the Eighties – Twelve Cubic Feet, a trombone, La Mômo, feedback, confusion, erosion, enthusiasm, the off-key harmonies of The June Brides. This isn’t a reflection on the intenders, but on the interpretor. It’s what is special to me. Such beautiful bruised fragile music. Such a beautiful bruised wanton sound. Harmonies and a synth and a guitar that shreds the way The Legend! understands shreds: a paper shredder, not a fucking song book. Noise that gets noisier every passing moment. A trombone like EVERY FUCKING BAND SHOULD HAVE ONE. A way around a musical brawl. This one song of theirs has not left my head since I first heard it, 15 months ago.

I don’t watch Duck Duck Chop. I’d like to, but I don’t. The Gap is calling and the call of The Gap is not easy to avoid.

Understood is the necessity of throwing the listener off-balance but not letting your cleverness intrude in the way of your dancing shoes. (The return of Everett True | 55. Duck Duck Chop)

Just another beautiful day out with the true heart of Brisbane.