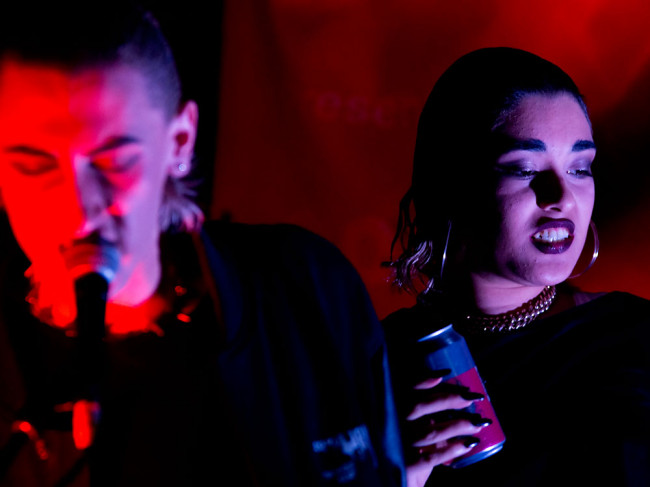 Habits traverse an area few of their more visible Australian contemporaries dare venture. The pair’s 2016 debut Ugly Cry makes nods to the sounds of Melbourne’s electronic underground, acid house, industrial, synth pop, club music and future R&B. Wherever the two find their inspiration, they make it exciting, without losing a grip on creating music that’s unequivocally danceable. They take a hefty sideswipe at convention without abandoning it altogether, building elaborate electronic arrangements from simple yet quirky and rhythmic musical ideas. What really takes them to another level is their powerful live performance.

As visually striking as Queensland’s Gallery of Modern Art may be, as an acoustic space it poses some challenges to the group’s sound. Admirably the pair are quick to adapt. The crowd is a mix in the truest sense. Older culture vultures, curious punters, local music scene fixtures and a small but dedicated contingent of die-hard fans.

Habits cut into their set with a series of heavy-hitting dance stompers. They deliver their most recent release, a brutalist trap number ‘Shame / Desire’, with abandon. Mohini’s falsettos wax confessional crisscrossing Maia’s stygian melismas. When not modulated via a myriad of effects these deliveries showcase both members’ formidable vocal talents.

‘Ether’ follows in a similar vein as a heartsick back and forth between the two. Coming in towards the evening’s close the grit-laden pound of ‘Reverend Mother’ vibrates with immediacy. Seeing Maia and Mohini move across the stage makes plain the pair’s visual presence. There’s a sense of spectacle, but nothing feels contrived.

Habits celebrate difference and believe in what they’re doing. There’s something invigorating about their music. Performing with conviction they may just have the momentum to find wider success on their own terms. Whether it’s a continued groundswell or a natural artistic outgrowth that wins them the day, there’s an internal spark that colours them as something more than a footnote in the present narrative of Australian music.