“I Just Want To Stay Excited”: An Interview with the Goon Sax 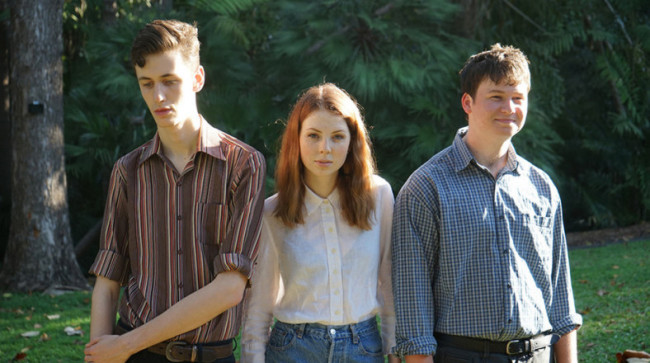 “I want people to think about me”, sings a wistful Louis Forster on the title track of The Goon Sax’s candidly self-deprecating LP, Up To Anything. The album deals in subjects that pertain to certain kind of world-weary adolescence that’s never cynical nor maudlin. Instead, it’s presented with a wide-eyed excitement that veers from idle hopelessness to teenage euphoria. Having formed in 2013, when all three members were still at school, their music realistically deals in both the joy and grievances of our formative years, but it’s also identifiable to anyone who’s ever experienced heartache, self-doubt, social awkwardness and feeling out of place.

Pop music as it its simplest, affecting best: The Goon Sax recall bands from indie pop’s past with admirable authenticity. ‘Up To Anything’ is about as perfect a debut album could be for lovers of honest guitar pop everywhere.

What’s the story behind the band’s formation?

Louis: James and I met when we were both asked to join a band by a mutual friend back in 2012. I left that band about a year later and had the idea of starting a band called The Goon Sax after someone at school called me a goon. At the time I was nervous about showing my songs to people, but James was the only person I felt comfortable showing them to, so I asked him if he wanted to start a band with me. Over the next 6 months we wrote a short set of about 8 or 9 songs – we wanted to play them live so we were tossing around a few different lineup ideas and tried some drummers but it never really felt right. We had wanted to ask Riley for a while, and we were very surprised when she wanted to do it.

Australia in general has a rich musical history, but you all share a love for a lot of British bands, the sound of which is a prominent theme on your debut LP ‘Up To Anything’. Would you say you’re more informed by British indie pop?

Louis: Before the album came out, and people started commenting on it, I would definitely have thought our sound was closer to a lot of Australian bands. Having said that we are all fans of a lot of British pop music too, so it was nice to hear that influence has filtered through, even if it was subconsciously.

Despite being a great band in your own right, people seem to find difficulty in talking about the Goon Sax without mentioning The Go-Betweens (here I am being guilty of just that, sorry!). Does it frustrate you, or are you proud to be associated with such an influential band? How much, if anything at all, have they been an influence on The Goon Sax?

Louis: I totally understand people feeling that they want to bring it up, but when people write about us and the whole thing revolves around that it does get a bit frustrating. There have been a few reviews where critics have interpreted some of our lyrics, which I didn’t even write, as being about The Go-Betweens when that was absolutely not what they were about. So I think some people maybe get quite carried away with it. That being said, a lot of people (including yourself) write about it really well.
I don’t think my Dad was that much of a musical influence but it definitely made making music seem possible which was inspiring.

I love the simplicity of songs like ‘Boyfriend’ and ‘Telephone’. Are you keen to keep things simple while focusing more on melody, or do you think you’ll explore something more complicated eventually?

Louis: Thanks! I guess we always want to keep making music that excites us when we make it. I try not to think too much about what I’m doing when I do it because I definitely have a tendency to overthink things. I really want to keep the focus on melody because I think that’s so important, but I do hope the melodies we are writing keep developing. Whether they’ll be more or less simple I don’t know yet – I just want to stay excited by them.

You mention Abba in the song ‘Sweaty Hands’, are you fans?

Does anything influence you outside of music – i.e, writers, people, places etc?

Louis: Sometimes it can be hard to really trace where influences come from, especially outside of music, because it’s less obvious and you can’t easily make a direct connection because we’re all probably subconsciously influenced by a lot of things. I know Rene Goscinny was a big influence on me, though.

What’s the music scene like in Brisbane at the moment, do you have any recommendations of local bands?

Louis: Yeah there are a lot of great bands in Brisbane. I am a big fan of the Mosaics, they are very good and they keep writing better and better songs all the time! I like Blank Realm and Scraps a lot too, they are both really good live as well.

What other music are you currently listening to?

Louis: I really love the new Frankie Cosmos record, I think she is one of the best songwriters in the world. When I listened to that record for the first time it was exactly what I felt like hearing, and every time I listen to it I feel very excited to write more of my own music, too. I am listening to the B52s a lot as well and getting quite into Erykah Badu – they are both great. Holy Balms new single is really good.

You’re touring the UK for the first time this Autumn, where are you most looking forward to playing?

Louis: We are all very excited to play in Glasgow. There seems to be more good bands from Glasgow than any other city really – also, The Pastels are DJing and they’re one of our biggest influences, so it will be very special. I met Stephen Pastel about three years ago in Cologne when James and I had just started the band and I told him about it, but I highly doubt he remembers.

I’ve noticed the troubling way in which a lot of men – and even some women – write about women in bands – i.e using words like ‘sassy’ and feisty’ to denote a particular kind of strong and positive attitude that shouldn’t be considered out of the ordinary. My assumption is it’s because they see women playing instruments as a novelty. Have you ever come across this yourselves, and does it bother you, Riley?

Riley: I have seen it and I agree that it’s horrible. Sometimes people see me as a novelty drummer because I’m a girl, on a few occasions I’ve heard comments like “look, it’s a chick”. Once there was a drunken woman heckling “Bitch! Put some ass into it, bitch!” But they always seem to be stuck in a very outdated mind frame and don’t tend to like our music, anyway.

The title track and ‘Sweaty Hands’ are my favourite songs on Up To Anything – I particularly like how ‘Up To Anything’ seems to deal in the hopelessness and inertia that comes with depression. Is that a fair analysis?

Louis: Thank you, yeah that’s exactly it really. I sometimes worry that people won’t understand what I’m talking about because it’s hard when you are trying to cram something into so few syllables, so I’m glad you understood it so well.

What’s your process behind creating songs, and do you all contribute lyrically?

James: Generally we all come up with song ideas and lyrics individually before showing it to each other. I don’t usually feel comfortable if people are listening to my ideas unless they are fully constructed, so most of the initial songwriting is done alone. Although we all do contribute to the songs later on.

I love how your songs capture a certain kind of awkwardness that epitomises adolescence, yet they’re relatable to most people regardless of age. Is most of ‘Up To Anything’ autobiographical?

Louis: Definitely, I think it all is. None of us are particularly prolific songwriters, so between each song usually a lot has happened in that time, which we’ll want to put in a song. If we wrote more songs maybe they would be more non-autobiographical sometimes. Maybe on the next album.

What’s next for The Goon Sax?

James: We are all really excited to travel to Spain and the UK in September, but after that we’re hoping to record sometime next year with some of our new material that we are very fond of.