“It’s not pastiche. I think people can tell the difference”: An Interview with The Allah-Las’ Miles Michaud 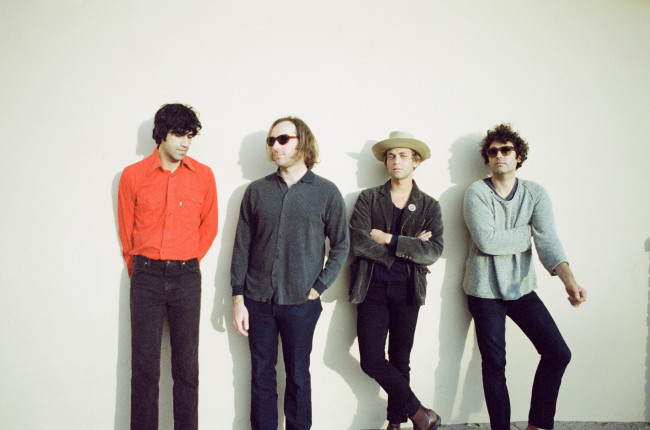 There’s an undeniable crate-digging obsession driving LA’s The Allah-Las. A quartet of self-confessed record junkies, the group overlay a gentle melancholy upon a core amalgam of R&B and gut punching garage psych. Yet far from simply venerating the acid-dazed brilliance of the ‘60s, there are also touches of bubblegum pop, surf, country and later revivalist movements underscoring their signature sound. After fashioning a sonic presence from these scattered inspirations for a self-titled debut in 2012, their second LP, 2014’s Worship The Sun, veered closer towards the warm optimism of ‘70s singer-songwriters. 2016’s Calico Review saw the four push further toward a more sombre and polished sound. Ahead of the quartet bringing their idyllic West Coast vibrations to Australian shores; we caught up with guitarist Miles Michaud, prodding him for his philosophical insights on The Jesus and Mary Chain, regional identity, gentrification, and Stranger Things.

Collapse Board: The Jesus and Mary Chain are an interesting influence you’ve cited in past. Part of their creative vision came from a feeling of disillusion with the prevailing music of their time. Do you feel a similar disconnect with modern music?

Miles Michaud: No, there’s a lot of modern music that we like, that we dig and I wouldn’t even say that we did it [The Allah-Lahs] out of a disillusion with modern music. I think we just kind of had a different kind of idea of what we wanted to make at a certain time. We definitely listen to Jesus and Mary Chain at certain times and there definitely is some influence on certain tracks, especially in our production, it’s very reverb-heavy. We like to use a lot of reverb! But I wouldn’t say we’re disillusioned with modern music; if anything it’s probably better now than it has been in a while. People are starting new bands all the time that you can get into, it’s a good feeling.

CB: Something which really seems to jump out at people about the group is an association with ‘60s music. Why do you think that is?

MM: I think a lot of it has to do with the production and maybe, depending on different tracks, maybe the topic or vocal content. But there are a lot of elements in our music. We have and do a lot ‘60s stuff, but that’s not the reason we ended up doing it. It’s not pastiche. I think people can tell the difference. There are a lot of pastiche bands, bands that just try and mimic something and they don’t really ever break through. I think something we ended up doing subconsciously was blending those elements with modern pop themes and elements and making a music which isn’t from any time. It was something we just ended up doing because we like a lot of different music and it came out that way. It’s ‘60s heavy for sure, but we like a lot of different things. There’s a lot you can pull out and analyse.

CB: There have always been these waves of revivalism and revivalist movements. But just in the last 10 years or so groups like the Ty Segall, Thee Oh Sees, Foxygen and Tame Impala have all taken these past inspirations and re-contextualized them in some really interesting ways. Would you consider The Allah-Las as part of a greater wave of revivalism, an internet era postmodernist sort of thing?

MM: Well I think it’s something which is prevalent in a lot of art and a lot cultures right now, this idea of looking back to the past and reintroducing it to the modern. Not just in music but in film and in TV. Take that show Stranger Things for example, people love that show because it looks like a movie from the ‘80s, but it doesn’t mean it’s any less credible as art, as an art piece. It’s a great show with great writing.

Maybe it is a postmodern sort of thing because the internet has brought so much information to so many people so easily; you can sort of look back through time and learn about how things were. We can develop our own opinions about these things as opposed to being told by advertisers that you need whatever new thing that’s being pushed forward. I think that’s a liberating thing for a lot of people.

CB: Do you feel an affinity for any other bands doing this sort of thing? Do you have a musical family in LA?

MM: We try to tour with bands we see eye-to-eye with. We just went on tour with The Babe Rainbow actually from over there. Those are great guys, I really dig their [self-titled] EP and they’ve sent out some of their new stuff which is forthcoming and sounds really good. We’ve toured with TOPS from Toronto, they’re really cool too. Night Beats, those guys are great and Ty Segall like you said. There are a lot of great bands around, but I wouldn’t say it’s a community, we all have our own friend groups and what not, but we see people out all the time and it’s good to just catch up and chat.

CB: Jumping on to a different topic entirely. Gentrification is something which has been having a big impact on some of Australia’s musical hubs at the moment. My understanding is that this is also a big issue for America’s big musical cities, including L.A. How can musical communities address the problem?

MM: I don’t know if it’s something which needs to be addressed by a community; I think it more comes down to the individual. That’s kind of what our song ‘Could Be You’ is all about. It’s about things changing around you and whether or not you’re going to be one of those older people who complain about “how shit’s changed” or whether you adapt. It might take moving to a newer city; it may take starting something brand new. If that’s the person you are that’s what you’re going to do. You can’t just complain about rising rents and how things aren’t the way the used to be, you gotta push forward to make something newer and better.

CB: The “Californian Aesthetic,” this idea of the West Coast transmitted to the rest of the world in the ‘60s and ‘70s especially through music, plays heavily into you work. Is there something that defined this sonically or was it more of an external thing?

MM: I think a lot of it just has to do with the people who moved here. The Summer of Love and the Haight-Ashbury scene, that was all real. The town we grow up in was this small little hippy drug town, that’s just who came out here and we’re a product, the children, of those people. I think that’s how any regional kind of identity gets formed; it’s a collection of people who think and act and do in a certain way. I think we’re just the remnants of that. Sure we have a reputation for being laid back or stoned or whatever, I don’t know (laughs)! It’s just like anywhere else and there’s an element of truth to it, that’s what comes out.

CB: In wake of your eponymous debut, Worship The Sun really seemed to tighten things up with a greater focus on songcraft. Calico Review seems to push things further still. Are you trying to develop a certain sound?

MM: I wouldn’t say that we have any overarching philosophy or goal in terms of where our sound goes. I think that it goes back to that idea of us as music fans first sort of thing. We’re always looking for and getting into new music and that trickles down and filters what we end up creating. That’s always been what it’s about for us and that’s the guiding light in terms of what we make: It’s what we’re into and what we’re listening to at that moment.

CB: Where do you think you’ll go next?

MM: We’ve thought about it and we’ve kinda come up with a bit of an idea, but it’s a bit early to say too much on it. It might change!

CB: You’re currently gearing up for the Australian tour. What’s coming next in 2017?

MM: After Australia we’re going to Bali for a little bit. We’re going to play a show up there. After that, we’re going back to LA where we’re going to start writing and demoing, getting together just to make some new stuff, new ideas and demos, that kinda thing. Then we go back to Europe in August for some festivals and shows. For the winter we usually hunker down at home. There’s a studio we work at up in Topanga Canyon where we demo, so we’ll probably hang out up there and work on some new stuff.