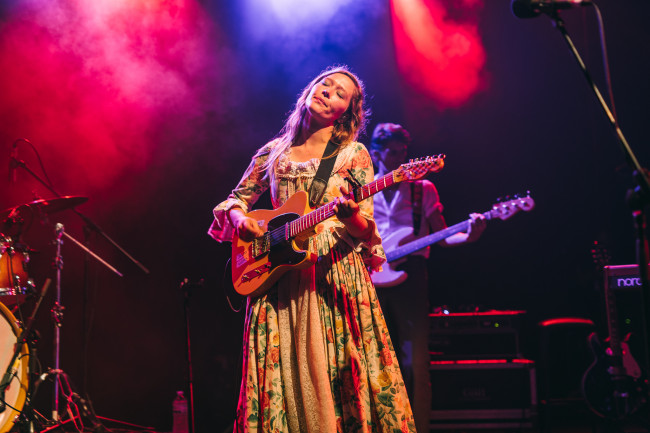 It’s a cool Friday night, the penultimate day of summer, out on the lawn at Melbourne Zoo. As usual for Zoo Twilights, it’s packed with folk of all ages, relaxing with a beer or a pink gin with mates and family, waiting to hear some great live music. Tonight’s offering is Sydney’s Julia Jacklin, supported by LA’s Weyes Blood.

I personally haven’t heard Weyes Blood (AKA Natalie Mering and band) before, but she has plenty of fans singing word-for-word, and one couple slow-dance on their picnic blanket in the twilight. She looks 70’s power-glam in her all-white suit with flared pants and white high heels, long dark hair flowing over the large appliqued ‘Weyes Blood’ life-preserver emblem on her back. Her voice is strong but mellow and pitch perfect; the songs I’d describe as psychedelic ballads that remind me somehow of The Carpenters or a kind of slow ABBA-cross-Bowie. She’s very professional, though I find the tempo never really lifts and I kind of wish it would. Each to her own.

After a brief break, Julia Jacklin, arrives solo on the stage with her guitar. Her green and apricot floral period dress reflects the colour scheme of her second album, Crushing (2019). She opens with the sparse soliloquy, ‘Comfort’, the final track off the album. She sticks to the brief of her album in its rawness, her delivery so crisp and complete, you hear her every breath and consonant like she’s whispering in your ear. It’s just gorgeous.

The rest of the band join her on stage and play most of the tracks from both Crushing and her debut album, Don’t Let The Kids Win (2016). It’s hard to pick  favourites from her mix of styles – country, rock, ballads and more. Every one is sung with heart-felt candour. After the incredible ‘Turn Me Down’ – when even the most hardcore gossips on the lawn actually shut up to listen to this bolt of stunning unease – Julia says she feels really strange, dressed in period costume singing about her feelings – ‘Does anyone else find that weird?’ she asks, but in all honesty, we don’t because she’s so darn genuine it makes your heart bleed in buckets.

I really love her lyrics, particularly about women owning their own bodies. She sings a very cool cover of Leonard Cohen’s ‘Memories’, which she says inspired her to explore the idea of women’s rights to their own bodies. I’m certainly not alone in endorsing this, as most of the women in the crowd sing along loudly, particularly to the popular, ‘Head Alone’:

‘… I don’t wanna be touched all the time
I raised my body up to be mine,
I had your back more than I had mine
I want you to feel good all of the time
So I’ll say it till he understands
You can love somebody without using your hands…’

Everyone swings along to ‘Leadlight’ and ‘Pool Party’, and ‘Pressure to Party’ rounds it out, revving the crowd up to bop all too briefly. Unfortunately the night is nearly over and Julia and the band leave the stage for a short spell. She returns though, to everyone’s pleasure, bookending the set with the sweet solo, ‘Don’t Let The Kids Win’.

My other half has a big crush on Julia – well, frankly I don’t blame him – he sits and listens to ‘Crushing’, shaking his head, murmuring, ‘This is just gold’, and he’s right. Even Weyes Blood called her ‘Australian royalty’. There’s really nothing to not like.