Lee Adcock’s Response to Everett True’s Response To The Flaming Lips – Why Can’t We Be Fwends? 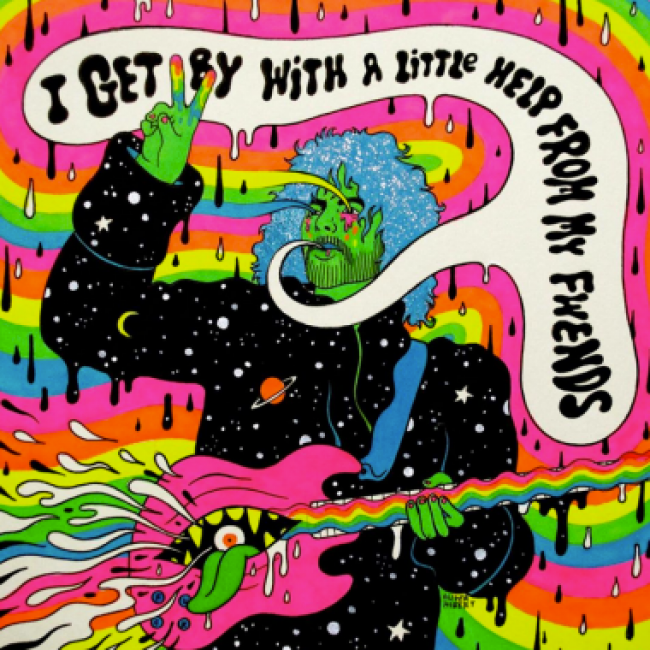 I had a good intro here. A fucking good one, too. But then it vanished. So fuck it. The title says it all, anyway. ET asked, and so I answered:

1. Because, quite frankly, everyone’s still catching up to the Bastards of Fate.

2. Because their Stone Roses cover album [link] actually DID trump the original, bursting with colors and bristling in textures that our favorite wanker Ian Brown never even dreamed in. So, coasting on that vessel of artistic license, Wayne hoped to sail another fine ship to harbor with Sgt. Pepper. Alas, out-psyching a landmark in psychedelia won’t be such a breeze…

3. Because everyone needs at least one Beatles cover in their repertoire, for legitmacy’s sake. And Coyne is a most generous guy.

4. Because nothing’s ever done until it’s OVERDONE. It’s not enough to blow up “Lucy In the Sky” – ya gotta blow her to bits in a rainbow-neon supernova that lingers for a thousand years. However, Miley Cyrus makes her first of two cameos here. And ya can’t hear her in the totally fudged chorus – again, supernova – but the infamous visions don’t sound so far-fetched when she sings them. At least, not until the last verse, where the wiry bundle of overdubs obscures her sleepy-eyed wonder. Yes, that’s what makes it work, I think – Miley conveys a wariness toward the fantastic scenes, a wariness against the gag-inducing bombast.

You do wonder, though, if Wayne’s playing Miley as his trump card, if he’s hoping all the hipsters will chuckle at high-brow-lo-brow clash and snap up the record just to hear it explode. He did, after all, feature both this and Miley’s other cameo, singling out Miley’s contributions from the dozen other helping hands (with one exception, which we’ll also see later).

5. Because “She’s Leaving Home” does need more versions sung by chicks. Unfortunately, not this one, which stuffs in lots of gee-whiz gizmos and skippidee-doo beats, and saps all the tears out of the original. Get it in yr thick skulls – the song’s about a daughter running away and breaking her parents’ hearts. Have you ever met a mother who’s lost contact with her kids? She feels like a failure. You don’t gloss over that with bells and whistles.

6. Because circuses can never regain their innocence after “Dumbo”, can they? In the most radical rewrite, “For the Benefit of Mr. Kite!” is stripped down to a spooky synthy skeleton. Somehow this reminds me of Fad Gadget. God damn it, Lips, I’ll admit that’s devious. Kinda clichéd, but devious.

7. Because there is no room in this ultra-modern world for clarinets (“When I’m Sixty-Four”). What every orchestra needs is more vocoders and bugged electronic wizardry, clearly. Sniff. Woodwind killers.
8. Because more is less. I mean less is more. I mean more is not more. I mean oh fuck it.

10. Because, damn it, “Good Morning Good Morning” was always meant to bang this hard. Little bit of unnecessary jiggering in there, but otherwise thumbs way up. Plus, not sure, but sounds like they snuck a few “las” in from Kylie Minogue, which was a genuine mindfuck for me and always approved of in these quarters.

11. Because Foxygen must be good for something, if only to provide the inevitable CCR-meets-?-and-the-Mysterians-over-a-peace-pipe jam break so everyone else can go fetch some coffee.

12. Because – Miley? What are you doing here? She appears for almost two minutes on “A Day In the Life” – that is, the entire “woke up, got out of bed” sequence. And she’s lovely. She reminds me of Sky, the way her voice weighs down the words. She cuts through the waiting-room-dub pap as light cuts through the canopy. And then she does that glorious “aaaaaah” segment, and she sounds – well, glorious. But then, save for one quip at the end – “that’s not me, I don’t think” – she’s gone. Like Lucy.

13. Because, at the end of the day, we do have to ask ourselves – is the original defunct? That is, does the original Sgt. Pepper’s represent an era with an aesthetic that we – err, maybe not “we”, but those who have brought us to this point in Western culture, and those who live and breathe it, even if they don’t think about it – have erased? THAT IS, has the bohemian drug underground died? Has the quiet British countryside been paved and quartered to commercial parties? Must be every conversation be spoken in ironic code? Would a youth today mistake a euphonium for a golden toilet? Do the kids now need dubby bass and mishmashed genres and ubiquitous cutting-edge synth sounds crammed into every last second to be entertained?