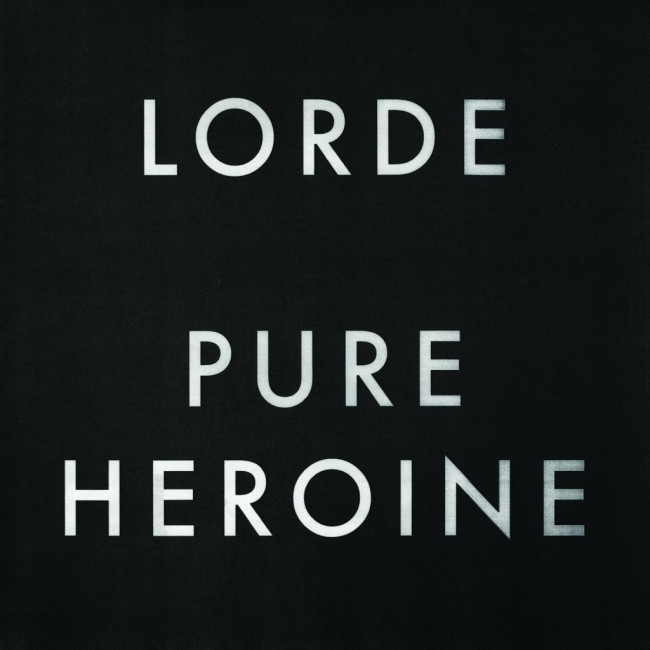 The first words on the album are Don’t you think it’s boring how people talk?

The last words are Let them talk.

First there was a song on the radio that kept giving me chills. Then I noticed the words. I was intrigued. I sought out the album, not expecting much. Pop tends to best be experienced four minutes at a time. Even Beyonce — and if you held me down and asked me to name the greatest song of the 21st Century, the one I would send into space to show other life forms what humans were capable of, it would be ‘Single Ladies’. Unless it was ‘Crazy In Love’. Or any handful of Missy Elliott songs. Did ‘Bombs Over Baghdad’ come out before or after 2000? Did the century begin on Jan. 1st, 2000? Or Jan. 1st, 2001?

The album is great. It debuted on Rdio last week, and I’ve spent a lot of time since then listening to it. ‘Ribs’ might be my favorite, the way it bends and surges, but it’s ‘Royals’ that keeps haunting me.

I find myself drawn to the strange sparseness of its sound, the subtle, implied message that you can transcend a world of empty materialism and inherited privilege through your imagination, through the ability to create your own world.

In a summer where we saw the birth of an heir to a throne thrown up all over every  magazine/newspaper, there is something genuinely subversive in a song that asserts a fluid identity is more desirable than one which is fixed, even in wealth, even by blood.

Pure Heroine sings the virtues of flexibility, the freedom to inhabit any role a person might desire, with a tenaciousness rarely seen out of Shakespeare. Don’t think for a second that Lorde hasn’t read As You Like It, or possibly even Twelfth Night.

‘Tennis Court’, the follow-up, goes even further, ruminating over the taste of success — the way it warps yourself and those around you, makes everyone involved turn boring and small. It’s a fight song for freedom — I imagine it would take on all kinds of power sung live to an audience — and Lorde finds her freedom, not in ‘keeping it real’, but in heading down to the tennis court to play freely with identity and character.

The tennis metaphor is a loaded one: players take turns switching sides on the court, alternating service and return as they play, sending the ball out and getting it back. It implies a free and easy exchange, a comfort in constantly changing positions. Lines are permanently drawn, but the player is free to work within them however they desire.

And it’s sung by someone who sounds completely confident, like they’re loving every minute, the satisfaction of finding the right words, the right mode of expression.

I love the sparseness of this song, that it was able to become a hit without the benefit/detriment of a dance mix. The sound reminds me at times of early Burial. This is appropriate. Lorde likes Burial. It’s haunted and haunting, eerie and innocent. There’s nothing like it on US radio right now.

In its obsessions with identity, fantasy v. reality, the feeling of being watched, it couldn’t be more of its time.

Her mother is a poet; she grew up surrounded by books. It shows in the way she uses language.

When she describes “all the double-edged people” in album-closer ‘A World Alone’, I swoon a little at all the associations it creates. Because the idea originates out of a cliché (double-edged sword), it might blow right past you at first, but then you think, and all kinds of associations come:

And it’s done quick and economical, like a poet.

Pure Heroine is thrilling. I love the ‘Cathy’s Clown’ drum stutter in ‘White Teeth Teens’, and the way she sings, “I won’t be smiling but the notes from my admirers fill my dashboard just the same”.

There is joy to be had in this album, but not much smiling. I’ll never understand why people excuse empty-headed music because its creators are young, or because it’s ‘only pop music’. Young doesn’t have to mean shallow. And pop doesn’t have to be fluff. When people are making pop that is this fun, this intriguing, that gets under your skin, that has emotional/intellectual weight, that is everywhere you go but still impossible to pin down, it seems like an act of defeat to settle for anything less. To explain a record’s emptiness by falling back on its genre. To insist that anyone who believes otherwise simply doesn’t like pop.

At its best pop is about not having to choose. That’s where the excitement lies, the thrill of immediacy that gives pop its kick. If we’re going to blur genres and eliminate distinctions, then the result should be music that is more stunning and expressive, not less.

Pop thrives on innovation. A little outside influence, any extra-musical idea can go a long way. Even the new Britney song leaves me smiling. Not only because ‘Work Bitch’ gets stuck in my head, but so does Lou Reed & John Cale’s ‘Work’, from an elegiac album they made after their friend Andy Warhol died — a man who, for many people, defined the idea of pop art.

I imagine the two songs playing off of one another, or being mashed together. I imagine Lou singing Britney, then Britney singing Lou. Then I imagine John Cale singing ‘Style It Takes’ to Britney, singing her to sleep and stroking her hair.

Along with Vampire Weekend’s Ezra Koenig, Lorde is one of the few writers in pop/indie/whatever writing insightfully about issues of class and wealth. There’s an interesting difference between the two though — Lorde’s narrators are looking up at the privileged (usually via film/magazines/tv), while Koenig’s are looking sideways; they are sitting beside him. It gives her lyrics an extra fission, a little more subversive kick.

And I’d be very surprised to see one of her songs pop up in a Honda commercial. Not that there’s anything wrong with that, of course, not in this more enlightened day and age. And as for someone like me, who can no longer listen to VW’s Contra without remembering a weekend spent with my wife’s family where I heard that song about 50 times, forever associating ‘Holiday’ with said commercial, well that’s just my tough shit, right?

Somehow I feel like Lorde would understand this in a way that some music writers do not.

And yes, Lorde, I do think it’s boring how people talk.