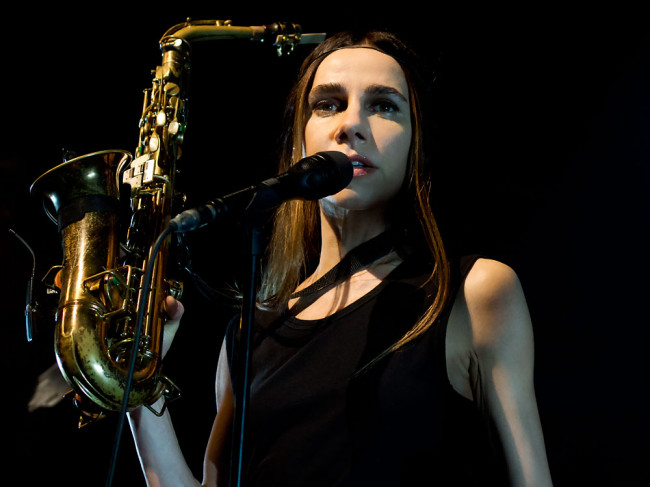 Between 2011 and 2014 English singer-songwriter and multi-instrumentalist, PJ Harvey travelled with filmmaker and photojournalist, Seamus Murphy, to Afghanistan, Kosovo, and Washington D.C. The pair documented their observations and the experiences of daily life and the struggle faced in these environments rife with conflict—culminating in a collaborative poetry/photo book, The Hollow of the Hand. Extensive notes taken during this period, also informed her ninth studio album, The Hope Six Demolition Project; a moving expression of the profound found. “I wanted to smell the air, feel the soil and meet the people of the countries I was fascinated by,” Harvey has said of the experience. Tonight she brought it to us. The bleakness and gravity of the song themes felt throughout the set, yet at times a driving optimism is also present, a hope, that the world can do better and be better.

The band emerge from the stage shadows in a procession, channelling a colonial army band with members playing marching band style percussion leading in to the opening song ‘Chain Of Keys’, setting the tone for tonight’s austere, almost theatrical, presentation. They snake to form a loose circle, Polly Jean in its midst, playing saxophone, alongside her comrades; a sense of togetherness, unity and family radiates. The approach befitting of a set full of militaristic subject matter of war torn countries, the horrors of combat and its consequences. Harvey, never one to repeat herself too much from album to album, has obviously grown tired of the classic format of songs of love and heartbreak, her new found fascination with serious socio-political themes are treated with a respectful grace and delivered with honesty and compassion.

Despite having ten musicians filling the stage, an incredible amount of restraint is shown, with the members never playing just for the sake of it and only joining in when needed, content to drop their instruments to simply add choir-like backing vocals or additional handclaps and percussion. Interesting dynamics are at play all evening, as some tunes might have only one electric guitar, and others there may be four. At one stage there is six people playing percussion at once. Song ‘The Ministry of Social Affairs’ sees Polly recede to the back with her saxophone as Terry Edwards is given the spotlight for a manic sax solo, which receives one of the most enthusiastic crowd responses of the night. Track ‘Dollar, Dollar’ utilising atmospheric field recordings seemingly from Polly’s aforementioned travels abroad, giving a sense of being right there with her in these far way lands she is singing of. Bass guitar is rarely even used, with keyboards and brass providing enough of the low end needed throughout the night.

By the time the concert is 14 songs deep, they have only touched on material from 2007 onwards, and then we are finally treated to some classic 90’s era PJ. The stage becomes bathed in blue light, signalling a change as the band launches in to a furious rendition of ’50-Foot Queenie’ from her second album ‘Rid Of Me’, which electrifies the crowd and sees the venue really come alive after such a serious first half of the evening. This is followed by more classics, ‘Down By The Water’ and ‘To Bring You My Love’, which are received enthusiastically by an audience that has obviously been desperately waiting all night for more of this early material. The set closer ‘River Anacostia’ ends with the entire band front of stage sharing mics hauntingly repeating the lines “Wade in the water, God’s gonna trouble the water”.

For an encore, we are treated to a spirited rendition of Bob Dylan’s ‘Highway 61 Revisited’ and a very eerie and hypnotic rendition of the title track from 1998’s ‘Is This Desire?’. Polly Jean Harvey is truly one of those special, rare and unique figures in music that does a great job of ever-changing evolution that is so very hard to pull off. Tonight the music truly speaks for itself and the performance volumes, the spectacle is poetry in motion, which both moves and inspires.