Sky Ferreira – Night Time, My Time (Again, but this time with special guest stars EMI and The Needle Drop) 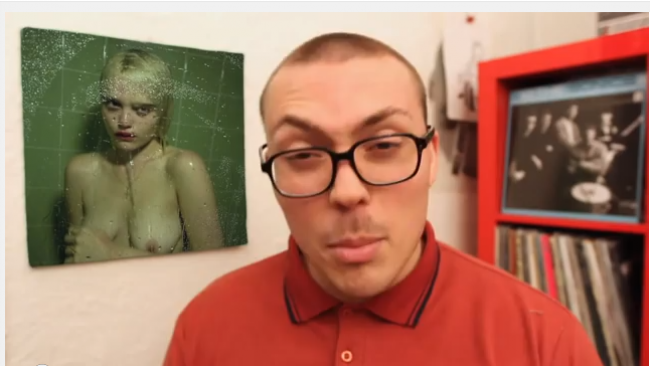 Yes, Scott already wrote a most righteous review for this album. Yes, Everett also championed her via a SOTD feature. And yes, I also adore Sky. So why is this review necessary?

Well, to begin with, EMI has finally blessed Australia with the release of Night Time, My Time, with the UK to follow next month. Hence, the timing. But I’ve decided to turn another angle and contrast our opinion with that of another music criticism heavyweight – Anthony Fantano, a.k.a The Needle Drop.

Has any other Collapsians covered this subject yet? Yes, no? Allow me, then – self-branded as “the internet’s busiest music nerd”, Fantano discusses and rates the day’s biggest buzz-garnering releases in a series of YouTube videos. And while thousands of media-chuggin’ musos debate each and every episode, no one’s about to deny that the man knows his music. Just listen to him lay out the back story to a hip-hop artist. That’s real street cred that I (and probably you, too, but then again everyone knows more than me) will never have.

In one way, Fantano commands respect among us more print-based critic folks. Here’s a bloke – a face, a personality, a minor celebrity – who is not merely recognized, but loved and despised and even summoned to academic lectures for opining ‘bout tunes. How many current NME writers can claim the same high profile? Furthermore, as far as I can tell, he’s entirely divorced from any intervening forces (editors, PR agents, label bosses, advertisers, etc.)

On the other hand, as the Needle Drop name rises in prominence, Fantano has to pander to his largely American fans and cover only the brand name indie labels – which means that you’ll never see him cover Tunabunny, or Blank Realm, or the Aquadolls, or Jude Cowan Montague, or Sky Needle, or any other independent entity that’s, err, actually independent.

Also, Fantano NEVER mentions other critics or reviewers in his videos. This bugs me. By not responding to other experts, Fantano secures his fans in a fantasy bubble where his word is law (perhaps that’s why he garners such dense comment threads). Even Pitchfork seems smudged out of the picture.

So. Let’s turn the tables a bit. A little healthy writer-to-vlogger conversation never hurt anyone. What did Fantano say about Sky? You can see for yourself…

…or, if you’d rather not invest seven minutes in such banter, you could digest this handy-dandy summary:

Now, far be it from me to dismiss Mr. Fantano’s expert opinion. In fact, hell, we agree on one point: no, Sky’s voice isn’t drop-dead-gorgeous. But for me, that’s a huge plus. Kinda perverse (or, in proper music critic terms, grunge) when ya think about it. A subtle up yours to the hit-making machine that sucks up character and spits out bland pristine inspirational junk.

But, hey, you know where you’re wrong, Mr. Fantano? You and your reader’s fallacy – you do it, I do it, we all slip up sometimes and assume that a writer is referring exclusively to his or her self when using the first person. Do ya think that maybe, just maybe, when Sky sings “10 years old without a voice/I feel like nothing much has changed/but now I’m just a little older” on “I Blame Myself”, she’s referring not just to herself, but to a shared life experience that many girls stumble into at some point? (Although, to be honest, I find the chorus of this one almost too saccharine for my tastes.) That, maybe, when she sings “nobody asked me if I was OK”, that maybe she’s unearthing a familiar downtrodden feeling that’s happening more and more in this age of earbud-donning drones that sleepwalk across campus?

What’s more important, though, is that “Boys” is one of the best fucking openers ever conceived. Though I think my mondegreen is better in the chorus – “you put my faith back in place” , rather than “boys” – but hey, doncha love a song you can bend and twist, that’s not a static entity? You can just hear the arena this was destined for, and yet not feel Michelob Lite or insert any other commercial entity here sapping its power. Because of her. Because of that moaning that drives you nuts, Mr. Fantano – that “I’m losing you” that hints at something more complex, some under this 100,000-volt power ballad. Why can’t I hear this blaring from the gym speakers and relieving Lorde of her token contemporary superstar throne for a while?

What’s also more important is “I Will”, which Mr. Fantano never mentioned at all because he’s never driven on traffic-clogged roads with this and yelled “TRY AND TEACH ME A LESSON / I’LL KEEP, I’LL KEEP YOU GUESSING”. Sometimes blunt is good. Very, very good. As catchy as a virus. Besides, apart from the obviously great blood-pumping beat and tinny synth, there’s the chorus itself – “I Will”. I will what? Your head races with all the delicious possibilities, corners of darkness that open up at your fingertips. Another great song you can bend and twist.

So, Mr. Fantano – you think that the Dum Dum Girls, who are the 569th band to worship JAMC, whose first LP is one lo-fi smear, is more interesting than this, which travels from bubblegum Blondie pop (“Love in Stereo”) to Suicide (“Omanko”) to PiL’s “Rise” (“You’re Not the One” – which, by the by, Scott, that warm bumbling bass and familiar tropic vibe is really growing on me, even if the vocals are empty calories) to the funereal headfuck you’d call the title track?

C’mon, bub. You love girls, and you know it. And I mean that in the most plutonic way, the co-conspirator way, the male cheerleader way. Remember that special feature you led on Pussy Riot (which, hey, did you ever shoot any follow-up? I searched for “the needle drop” and “pussy riot” and only dredged up that video)? Where you lauded the band for calling out the system they were raised in? That’s “Omanko”, man. That’s “Kristine”. That’s this whole album, really. It’s so out of time, out of step with the flashing neon club lights that Britney Spears embraced, or ultra-modern urban sensuality that Beyoncé’s taken up (“Blow” being a glorious disco exception, but ANYWAY), I can’t help that Sky’s also stickin’ it to the powers that be. Who cares if she’s not the model pop songstress YOU see her as?

(We can all agree, though, that “Heavy Metal Heart” sucks. Andy Summers called, and he wants the riff to “Synchronicity II” back.)

5 Responses to Sky Ferreira – Night Time, My Time (Again, but this time with special guest stars EMI and The Needle Drop)