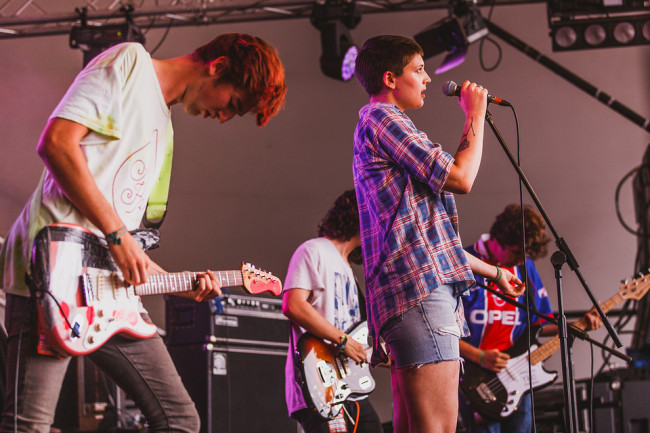 Today, kids, we are going to stand up and applaud.

So Drowned in Sound interviewed Alanna McArdle lately. It’s an innocuous, friendly chat really, with ordinary journo-to-band questions about songwriting, live performances vs. recording, “the volatile state of guitar music” (which both interviewer and interviewee agreed was a load of BS), the huge corporate sham of Record Day, and the like.

But in the second half of the interview, Hayley Scott asks about the twee-word. And that’s where the haters started paying attention. Alanna says super true things, like

People are always going to try to invalidate your feelings and experiences and that’s very hard to constantly fight against. But this has always been an issue in music, and I’m not sure if it’s particularly worse or better now that it has been before. I think people just find new ways to be sexist, that’s the only thing that seems to be changing.

[Twee is] a label that’s mainly lumped on bands with female singers and it just feeds this notion that there’s some automatically implied fragility and whimsy to anything remotely feminine and that’s just bullshit.

and, when talking about girls who venture out to gigs (which I’ve felt and seen here in Athens first-hand – more on that later):

But haters gonna hate, and DiS’s Facebook page erupted with comments from – who else? – dudes that dissented against those last few questions. (Ugh! Selective readers. So exasperating. You spend all this time forming a coherent, intelligent conversation, but readers only latch on to one paragraph or even one fucking line and run with it. At least Collapse Board readers know better.)

I could try and sniff out the worst bits – OR you can read Alanna’s BITCHIN’ response from Facebook (reprinted with her permission – thanks again!), which drags out the dirtiest ones and then one-ups them all. It’s so BITCHIN’, I’m a-gonna devote a whole page to it, ‘cos I just figured out how to do that.

2 Responses to SOLIDARITY TIME – Word Up for Joanna Gruesome