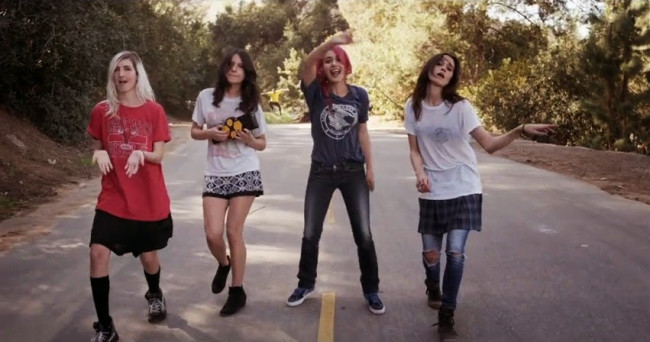 When I say “people”, I mean Collapse Board readers. But that’s OK, you’re one of them.

The way it works is that a week or so back, I compiled a virtual mixtape of my recent Song of the Day entries, and made a download link available to CB contributors/readers via the ‘secret’ CB Facebook group. (If you hurry, you might be able to catch it. I believe it has a few hours left before it expires.) In return, I asked that they voted for their five favourite songs. Some did, so I’ve reprinted the results. A completely arbitrary chart of popularity and taste – just like all those other completely arbitrary charts of popularity and taste. Still, at least this one features some fucking great music.

Pleasingly, every single one of the 21 songs present got voted for.

Holy shit, the first half of this is so good.

This is like ‘We Are The Champions’ for folk reared on a diet of Silver Apples. Or perhaps ‘The Message’. Perhaps that one about Hitler. A duo who know their skittering Krautrock, for sure. They should lose the Chris Martin facial foliage, though.

Damn, my own taste excites me.

This is good. It’s neat. It’s meaty. It’s unsettling. It makes me want to skewer sheep.

This song swirls and whirls and disconnects and then connects immediately. And yes fuck. It IS the blues, the way I always imagined them. It has spunk and heart and humanity and a middle-eight that confuses because of the time signature change, and Kristin wassailing and the drums thudding ominous and… did I already mention how shy and intimidated I become in the sound of genius? (Shuffles off, chastened.)

(Shuffles back on, happy now he’s heard the song several times in the interim.)

Sometimes I think that academic motif – “Standing on the shoulders of giants” – is misplaced, misdirected. Pop music glimmers brighter, the more it exists. The more it procreates. I don’t believe in the purity of the blood, in the ascension of the royals. I prefer my music mongrel.

I didn’t want to write anything tonight. But I still feel the desire to share, the urge, whenever I hear music as beautiful as this.

It took a bevy of words from Mike Turner to remind me of something I actually knew all along. That this band – this Trash Kit – rule more than most any band rule in 2014. Whatever, whenever. It ain’t a fuckin competition, asswipe.

Studiously alienated nostalgia in fast reverse, like Cristina exposed to the post-PacMan generation: all those squidgy sped-up Chipmunk’d possible vocals in the background.

9. Eureka California – I Bet That You Like Julian Cope

Sometimes, all you’re looking for from music is a good romp.

Here’s Bent. It’s great stuff. It don’t sound nothing like Trash Kit to my ears, being way more individual and wanton than such lazy comparisons invite. It sound like the first tape explosion of ’78 to these ears, being old and cranky and delighted this music still exists.