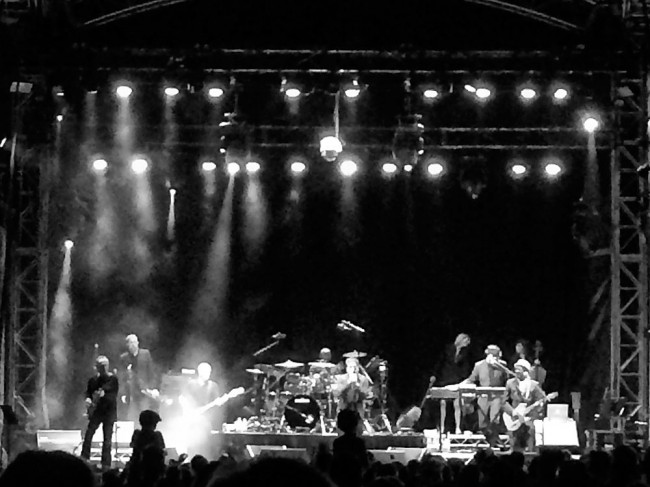 Storm clouds threaten but never come close to snuffing out the enthusiasm of the crowd at Melbourne Zoo for what is the ultimate gig in this year’s Zoo Twilights series. It’s been five years since The Specials last toured Australia and the fans are more than appreciative of the balmy Saturday evening and happy vibe created on this Labour Day long weekend.  It’s an unfamiliar scene for these surroundings, as a sea of 80s diehards picnic on blankets with their kids, who’ve been well indoctrinated into the joy of The Specials brand of rude boy ska.

Flying foxes swirl overhead to the sirens and spotlights that introduce The Specials to the stage in the gloaming, as day turns to night.  The ten-piece line-up, including vocals, bass, guitars, trombone, trumpet, violin, cello, drums and keys doesn’t hold back in choosing to open with what many would consider their magnum opus, the era-defining anthem,’Ghost Town’.

Through many incarnations of the band over nearly forty years, the main players uphold the original 2 Tone sound that made the ska revival of the late 1970s so popular. Original band members Terry Hall (vocals) and Horace Panter (bass) are present and correct, but it’s the charismatic Lynval Golding who holds the fort with his commanding voice, guitar and antics. Hall, renowned for being somewhat surly, seems pretty happy with the Melbourne crowd, kids, picnic blankets and all. He even throws out chocolate bars to kids at the front, letting them know, “It’s been really lovely to see you all. You know I hate people.” Ah, the charm.

The band play all but two tracks from their influential 1979 self-titled album and everyone is into it from the word go. With so many classic songs, the highlights are hard to pick, but the animal theme – being at the zoo and all – is hard to ignore; ‘Monkey Man’, ‘Do the Dog’ and ‘Concrete Jungle’ (“the animals are after me…”) all go down a treat. ‘Man at C&A’, ‘Gangsters’ and ‘Too Much Too Young’ are also popular, while ‘A Message to You Rudy’ and a cover of Bob Marley’s ‘Redemption Song’ prompt audience singalongs. ‘Nite Klub’ is a hit, especially when Hall throws in snippets of Sister Sledge’s ‘We Are Family’ and, more surprisingly’ Rod Stewart’s ‘Do Ya Think I’m Sexy?’ Perhaps he’s just delaying the inevitable rude words that follow (for the kids).

The bass and keyboard rhythms and prominent horns make it impossible not to dance with furious intent. Guys skank and gals twist on the lawn and, unconventionally, in a barbecue shelter under an “I Love Bandicoots” neon light. While some jump up and down, the more inebriated get tangled in their tartan picnic blankets and chilly bags. Kids ride on parents’ shoulders and sing all the lyrics too – although I’m not sure if that is a good or a bad thing. The first encore, an instrumental ska cover of the Western classic ‘Guns of Navarone’ has the throng boogieing rapturously but fearful the end is approaching. They have to concede it is all over by the time they’re swaying along to ‘You’re Wondering Now’, “…now you know this is the end…”.

With a busy touring schedule including WOMAD, Zoo Twilights and Golden Plains, plus shows in Perth, Sydney and Brisbane, The Specials prove they’re still the legends of British Ska nearly forty years on, leaving Melbourne with the memory of a very civilised but unforgettable night of skanking on the lawns at the zoo.