Frequency of the Truewave! – A Mixtape from Street Eaters 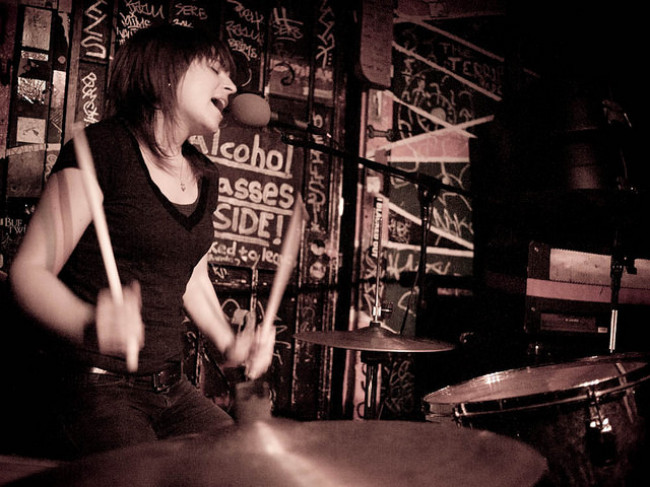 The girls-in-rock thing is still an issue. Don’t forget that.

Sean Adams at Drowned in Sound reminded everyone a few weeks back that rock festivals across the UK still book mostly dudes. (And I can’t find the article for the life of me. There goes my illuminating example.) Over here, musicians can point out the sound guys that hassle girls, and the bartenders that cozy up to regulars and shaft the females in the band.

But really, to fight the status quo, all we gotta do is rock. And rock some more. We don’t need to pose, we don’t need to pout. That’s what this “truewave” business is about – OWNING the stage, pouring out everything you’ve ever wanted to say. Our good friends Street Eaters are in the thick of the fight – but lucky for them and us, they’ve found a shining web of DIY, female-fronted allies from across the globe, and have piled them together into this mixtape. Allies in the flesh, I should add – for, as we’ve mentioned before, the Eaters tour like their lives depend on it.

Now, I know what you’re thinking. DIY = punk, yeah? well, you’d be only half-right. No doubt, the mixtape claws its way to your ears from the get-go, with four heavyweights manning the helm; the surging Husker Dü-ish “Drifting” from Bitpart (Paris) and Dead Tired’s relentless and off-kilterly snotty “Sweet Place of Mine” (Berlin) stand out in this hunk of muscle. And later on, Kenny Kenny Oh Oh (Leipzig – yes, also Germany) lurch into view with full-on, gutsy, summer-of-’76 punk. So, yes, this truewave we speak of can make one helluva racket.

Poke further in, though, and you’ll find that raw power comes in many different flavors. Indeed, my faves taste a lil’ sweeter and stickier. I wonder – are the Manic Pixie Dream Girls (Omaha, USA) a secret club of badass bomber-jacket feminists who all love Hole-istic fuzzy-scuzzy pop-craft? Cos if so, I want in. I’m probably not badass enough – SIGH – but that’s OK, because Durham darlings Martha are also here, and their “Clatty Harriet” is nothing short of a triumph for June brides, flatmates, and shop assistants everywhere.

We also veer into twistier territory (my favorite kind of territory) with Levitations’ sort-of Velvety (or, rather, a Slum of Legs kind of velvety) “Diva” (Berlin) and the quirky, Delta 5-like sneak “Teenage N.E Thing”.

But then! But then, ladies and gentlemen! There’s the tunes and the people that radiate LIFE, the music that you could live by, that blasts a crater into the earth. Street Eaters, of course, deliver that cosmic force (you should know this by now). But, in terms of sheer confidence and impact, few top Nervosas’ “Stellarcore” (Columbus, USA). Oh, man. This tune. Those riffs. Their voices. That strained guitar line that was ripped outta somewhere between Metal Box and Juju. Floors me every time.

By the by, I have no idea what’s happening in this video, or if this is even the band. But it IS the tune. My advice is to skip past these confused folks and dream yr own visuals. I see black and white beaches and moon surfaces looming large in the night sky.

But, y’know. You could spin this mixtape like a globe, jab your finger in any spot, and still land on a stone-cold knockout. I haven’t even mentioned Static Me (Cologne, also Germany – god damn, those Germans knock it outta the park, don’t they?), whose singer sounds Siouxsie on FIRE; or No Love (Raleigh, USA), a dream team of bristly Misfits; or the achingly good Wipers-esque Wild Assumptions (Oakland); OR the highway-scorching Arctic Flowers (Portland).

Any one of these die-hard DIY-ers could be your new fave band – nay, yr whole life in a nutshell, or the life-in-a-nutshell that you’ve always wanted, but lacked the guts to lead. If the latter applies – well, that’s what this Truewave business is about. Lead by example. Draw strength from the folks you trust, be they male or female, ten years younger or ten years older. Anyone can be a champ – ya just gotta try.

(Oh, yes, and Street Eaters are on tour yet again – roaming the world, backing their comrades in arms, staving off evil, etc. Some dates for ya.)