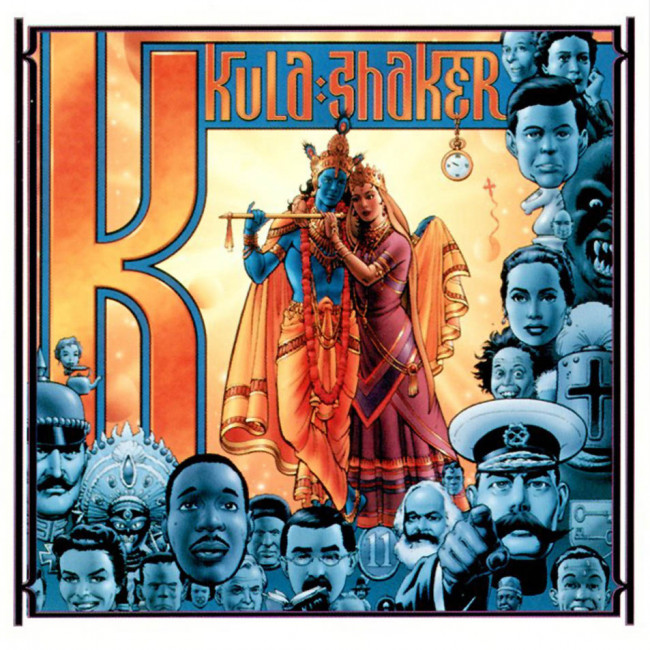 The narrow-minded reckon their experience of history can’t be surpassed; that there’s no point in drawing inspiration from the past because it was better IN THEIR DAY. They murder people’s vibes because they’re buzz-killers. They criticise young people for being unoriginal and lazy because 58 years after Bill Haley And His Comets’ ‘Rock Around The Clock’ charted, idealistic, rebellious teens haven’t evolved beyond simple pleasures like first crushes, guitar strums, pop hooks and leopard print. This disappoints buzz-killers immensely.

Buzz-killers will use songs such as London quartet Kula Shaker’s ‘Tattva’ – about intellectual abandonment and smelling the incense – to lambast uncomplicated singers like Crispian Mills for cooing “Acintya bheda bheda tattva” over an updated version of the refrain from Pink Floyd’s ‘Shine On You Crazy Diamond’. They’ll demand something more sophisticated – a unique way of saying “I love you”, perhaps. You can safely assume buz-zkillers are no longer in love, detest romantic gestures and are cautious of hype bands with hippy names.

More fool them, because fans who’ve witnessed Kula Shaker touring 2012’s EP ‘Summer Sun’ or opening 2013’s NME Awards Tour believe they’re Britain’s best live band. The band’s gigs have been an appetising cocktail of trouble-free sitar songs such as ‘Sleeping Jiva’ mixed with sprawling danceathons like single highlight ‘Grateful When You’re Dead/Jerry Was There’. So when people attack Kula Shaker it’s because of a supposed lack of sonic direction. But every live moment is immediate. Kula Shaker feel it all, every second. They’re so impulsive that at NME’s Awards Tour after-party Crispian got a new swastika tattoo without warning. What a dreamer.

This spirit is committed to K perfectly. Because here’s the life-affirming, naysayer-defying news: Kula Shaker are songwriting naturals. This is an album on which juvenile innocence gives way to new experiences – a rush of hormones here (‘303’), someone else’s culture there (‘Govinda’). You can taste the bright vitality of wild adventure. Yum. If there isn’t a tear in your eye by the final “ooh”s and “aah”s of psychedelic lullaby ‘Tattva’ (“Well the truth may come in strange disguises, never knowing what it means”) your heart is a swinging brick.

Those with one foot in the past may view Kula Shaker with scepticism, finding them over-familiar. Alright, the psych opener ‘Hey Dude’ reminds us of The Charlatans’ ‘The Only One I Know’ as organs swirl through a Technicolor wash of dirge. Admittedly, the generic ‘Start All Over’ blasts off like Red Hot Chili Peppers or Oasis before hammering a Gallagher lyric of “Make me feel, make me real”. Yes, ‘Grateful When You’re Dead/Jerry Was There’ is laced with Herculean drumming and could’ve been by Deep Purple. Indeed, ‘Into The Deep’ is one-dimensional, employing riffs that fizz like sherbet Flying Saucers. Totally, you can sing The Monkees’ ‘Pleasant Valley Sunday’ over ‘Smart Dogs” feral chorus. BUT ENOUGH WITH THE BUZZ-KILLING.

So long as teenagers exist, there’ll be eternal value in rock’n’roll this spectacular. It has no sell-by date. If K lacks depth it’s because it’s too busy being wide-eyed with marvellous wonder, thrilled by its own discoveries. Even the hi-hats are epic. Kula Shaker are intoxicated by their own youth, and all that matters is that they’re happening NOW. “If it tastes like honey/Don’t swallow it all,” sings Crispian on ‘Hey Dude’ before an escapist chorus about getting away from life’s pressures: “Don’t lean on me man/Cause I’m losing my direction/And I can’t understaaaand”.

Point is: music can reflect the past and still be valid. Some may see it as history repeating itself, for others it’ll be brand spanking new. If you don’t think Kula Shaker are as rejuvenating as a wash of zesty orange juice over a crushing hangover then you’re beyond help. As Britain suffers from youth unemployment and economic crisis, our greatest currency is the chime of a golden tune. Kula Shaker have delivered 13 of them. So what if they’re a bunch of pirates and not pioneers?

This is their time.