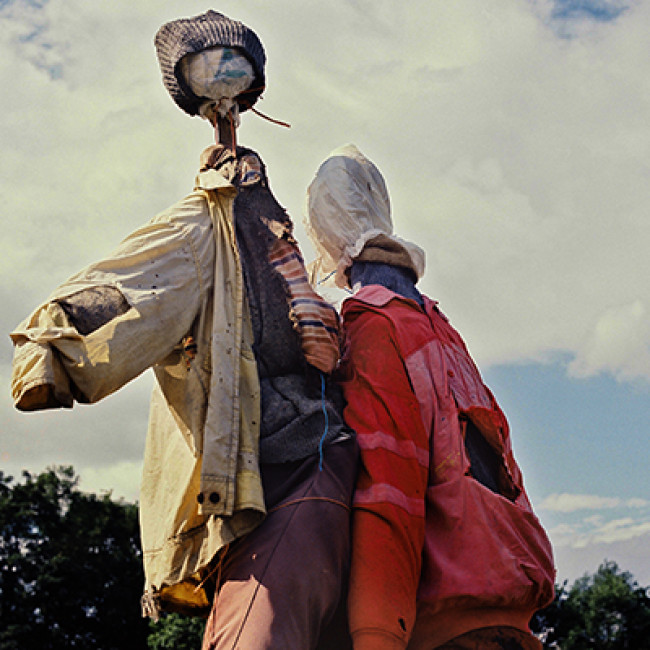 Don’t put faith in a new band. Few religions pass the scrutiny of reason, but identity and happiness can’t be entrusted to a handful of fallible human beings, let along twenty-somethings with a whole life of lessons ahead of them. Eagulls had me for a while, though – and probably you, too, if you’re reading this article. Their sewer-borne rage was nothing new for the avid post-punk fanatic, but youths (me included) can feed ravenously off that, particularly when their still fiery existence is cornered in some cold, static corner of the world. Next to the other tepid singles on college radio, the white-hot distortion on “Possessed” burned enough to brand yr mind – and that was only the tip of the debut album’s blade.

Anyway, that was two years ago. Since then, the boys from Leeds have traipsed the world. They’ve presented themselves at all the festivals that matter, been framed against corporate banners, appeared on late night shows to bewildered American audiences who expected the Eagles. The whole subterranean image they cultivated in the beginning can’t hold anymore – and, in turn, the “British Fugazi on acid” shtick that invigorated their work had to go, too. I should’ve seen it coming, really. No band worth their salt can stand in one place.

But just the name Ullages bodes ill – note the thinly veiled anagram, the first sign of a botched stab at reinvented identity. BEAK> pulled it off with their alter ego KAEB> last year, since they reached outside of themselves and found a genuinely alien (and brilliant) talent in Jonwayne. Eagulls, in contrast, have curled inward around their Cure and Bunnymen records – and despite the still high volume, the result sounds deflated. Rather than shaking my fist over the steering wheel, I’ve found myself shaking my head.

You can hear the new Eagulls in George Mitchell’s voice. Bled dry of the fury from the debut, he now croons unabashedly like Robert Smith, yet still belts every word as if his life depended on volume. That suited the rusted chrome frame of the debut, but Ullages is more a weave of lattices, Johnny Marr-like jangles and fine mists that sink for as long as the climate permits. By the time you’ve reached the sleep-deprived closer “White Lie Lullabies”, you feel as if you’ve had to endure 40 minutes of melodrama from a amateur soap opera star.

The Cure resemblance intensifies with Eagulls’ new-found moodiness: where once Eagulls could propel themselves through endless asphalts with guitars ablaze, now everything feels cold, frozen, prickly. The stubborn depression that underlines bombastic dirge “Life in Rewind” sums up Ullages to a tee: ebony timpani rolls, the long shadow of the sultry bass line, Disintegration-like ether riffs, Mitchell swooping in the verses with his wishes to abandon the present.

I reckon that, if I hadn’t heard the debut, this black-and-white widescreen approach would sucker punch me into submission. Indeed, anyone who’s swooned under celestial distortion would struggle to resist the nebula of guitars that coalesce in “Aisles”, even with that wince-inducing phrase about “aisles of lust”. But there’s something passive about Ullages that bugs me – the sparkling lope of “Psalms” that evokes the drowned elegies of Lowlife; the sedated scowl of “Euphoria”, wherein Eagulls touch vaguely on escapism without realizing that their very enterprise is a fantasy. That’s the crux: the blokes wanted to divorce themselves from the grit of their debut, but they’ve ascended too far from the tangible world, too far from the gut.

Two tracks stand out from the violet murk. “Lemontrees” was the obvious single from the start, the only driving beat on Ullages that supports Mitchell’s full-tilt yowl, even with the tinkling acoustic underneath and clear Bunnymen damage. But “Velvet”, preceded by the 90-second warm-up stretch of “Harpstrings”, better illustrates what Eagulls can capture in their new panoramic lens. While the whole album bristles with surreal textures, here an entire bass line buckles and warps in one giant smear as Mitchell tells some tale about Cupid (personifying the force of love, no doubt). I think it’s jiving with me, though, because the guitars that chime against the gloom remind me an awful lot of Mirror Parties, just without the cornered charm. [note: Everett introduced CB to Mirror Parties three years ago, and I loved them so much that I bought Bear Vomit on cassette and wore it out within a year or so.]

I’ve tried to like Ullages. Really, I have. I’ve tried to reason with myself, that if Eagulls had spun out another album just like the first one, then I’d have attacked that, too. Different directions lead to progress, surely, or at least confirm that music should live and breathe and walk with us, not behind us. But with this album, Eagulls step backwards – not against the flow of traffic, but trailing in its drift.