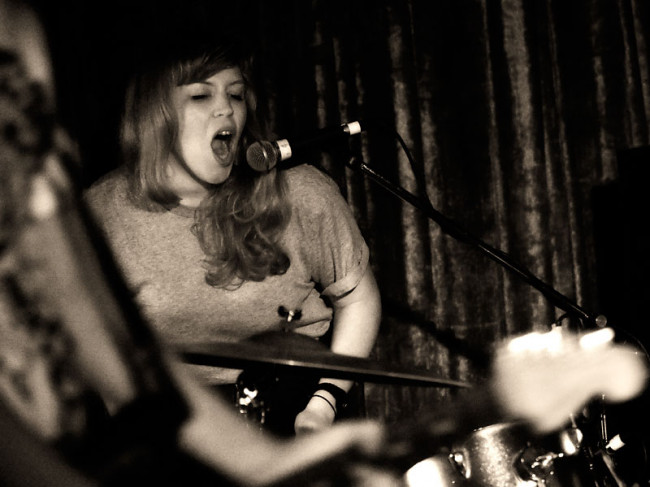 Twenty-four songs, of which eight are from Australia and 18 are female-led (or all-female). Fuck’s sake. Where have all the men gone? Do men even make music any more?

This is burst-open milk cartons. This is I-can-get-satisfaction. This is abrasion and challenge and the knowledge that the jerk in the back seat of the bus will remain a jerk in the backseat of the bus even when he gets off the bus. It’s the knowledge that the best forms of friendship are virtual and transient, that moles never stayed whacked for long. It’s garage doors that never close, it’s the joyous fear that repeating a riff too many times can bring. It says nothing to me about my life that I didn’t know already but why should that bother me, for that statement is clearly a lie.

Here’s the link to the single.

Three videos I played, trying to get a fix on noon:30 – three (two?) sisters from DC, so I’m told – and each time, they threw up something entirely different. The first one is totally eviscerating, brutal. The guitar keeps distorting, the mood builds, the voice keeps chiding until… whoa! PUNK ROCK!

This song bubbles and froths and has such a wonderful buoyancy, lightness of touch, playfulness, the brass and the vocals and melodies and guitars all colluding to make the most delirious delicious pop music. This is the only Francolin song I’ve heard to date – first tipped off by the redoubtable Jake Cleland – and I’m torn between kind of never wanting to hear any more because the anticipation of discovering yet Another Great Pop Crush is so overwhelming I want it to last forever, and spoiling that anticipation and gouging every last melted chocolate from the bottom of the Quality Street tin.

And that is the WORD.

This, to me, is David Bowie riding out with the stars. This, to me, is Kate Bush swooping through the lower echelons of motherhood. Mountains tremble. Guitars pretend to be violins.“Chaos, noise, No Wave – fuck the post-prog!” Spontaneous, beautiful and anti-belligerent. A bit of feedback, a basement-load of humanity. I’m sorry but this shit is important. Right now, this shit could be the only shit convincing me to stay in this Fuck You Outsiders, One-Horse White Shirt of a Town.

This music does not stay static long enough for you, me or Dom Alessio to be able to describe. Not that all of it is good. Are you crazy? Of course not all of it’s good. Define ‘good’. Some of it sounds like off-cuts from a particularly stoned session playing around with Primitive Motion’s keyboard sets. Some of it is squelchy just for the sake of being squelchy. But none of it is dull.

Someone has already described this Brisbane trio as being… damn it. I really don’t want to bring in parallels. I’m back in the pool room in an Islington pub, hiding from the members of Galaxie 500 because I don’t want to tarnish the varnish. I’m trembling like a leaf backstage at the ICA, about to introduce Daniel Johnston on stage. I’m Wayne and whatever the hell that other guy was called, on my knees in front of J Mascis in 1987, “We are not worthy”. Bands like this make me feel my age, leave me floundering and scarred. So good, so natural.

This new album, this new album that this song is taken from, is called Western Front. (I had a song called ‘Western Front’ once also: before UT entered my life and altered my entire perception of what music could be.) It’s bruised. It’s beautiful. It’ll scrape and scour away at your very soul if you even give it a quarter of a fucking chance. LISTEN to the music. Listen to it.

Regret and defiance and wit will only get you so far. As will the melancholy blues, baby.

Creney has updated his Facebook status even as I type: “Hey E. P4K gave it a 7.0 yesterday. Said it sounded like Devo. Or Ariel Pink. To quote you, ‘Bangs wept.'”

It makes me yearn so achingly for friends in Glasgow and friends in Brighton, and for the past… and possibly for the future… that it becomes a physical sensation. I want to be wandering through half-empty and austere art galleries, sheltering from the rain. I want to be wading into lochs. I want to be stuck on a British Rail train halfway between nowhere and nowhere, impossible to see anything in the grey murk outside. I want to be racing against Christmas lights as the darkness falls. I want to be held close, nuzzled. I want to be searching through rack upon rack of lovingly collated vinyl. I want a sense of belonging.

It’s Divine, when she was at her most sensual (Hairspray, bam!). It’s Jane Bond And The Undercover Men, shed of the spying allegations. It’s Cristina, falling apart and bringing down whole phalanxes of perv admirers as she goes. It’s Gravy Train!!!! with an extra exclamation mark. It’s three women expressing, and reveling in, their own sexuality, so unafraid and with such good humour and so untied to conventional ways of expressing sexuality they can’t help but intimidate great heaving sections of the population simply by existing. Feminist queer rap from Olympia, WA. Damn, I fucking wish they would move over here to Brisbane and FUCK SHIT UP.

This is a really lovely sweet song. (Damn! Damned again.) There again, I’m speaking as someone whose first free single was ‘Dreaming Of Me’ by Depeche Mode. Whatever. This will sound good on my next mix-tape.

Sometime soon, I need to wake myself up. This abject surrender, this kissing with my eyes open, serves me no good whatsoever.

Nice. Parkas pulled over heads, guitars twanged like we’re regretting the music of choice for Slackers. Lost in the woods, but not for long. Analogue organs. Analogue guitars. Analogue vocals. Analogue surf beach party frenzy. Point and counterpoint, stroll and counter-stroll. Saturated sound filler. No edges to scuff your dirty knees on.

“I bet you’d love a bit of Shopping,” my contact writes. And they’re right! I do. This Shopping sounds … well my contact’s description of them being a cross between Gang Of Four, Au Pairs and The Slits ain’t that far adrift, except that this would (by reduction) make them either Delta 5 or ESG, neither of which I’m going to object to. I mean (shrugs), to these ears it sounds like this Shopping sound a fraction too reverent of post-punk (I’m always suspicious of any band that can be so obviously categorised), but give ‘em time, I reckon. They’ve got energy, attitude, a spark. Let’s see if they turn into a Savages or a Divorce.* I know which side of the line I’ll be cheering from.

You’ve heard and loved this song before. There’s absolutely no reason not to hear and love this song again.

I love cooking when it goes right, but today my love for cooking is nothing next to my love for the new Camera Obscura album.

I love the first Black Sabbath album cos it feels so amateur: unfinished and clunky and full of ridiculous couplets, and (vitally) not scared of ridicule. Songs don’t fit together, most the time. The joins are so obvious you’re afraid you’ll slip through the door jambs. It sounds so raw and half-assed and full of space, silences that – by the time the 80s rolled along – almost all of Black Sabbath’s spawn were too scared not to fill in (mostly with drum fills). The voice, once an abortion, became a code. The Satanic leanings became Satanic earnings.

In music, as in writing, brevity is a virtue. This song is 27 seconds long and it does more in 27 seconds than most bands manage in 27 years.

The record label reckons that folk will like the 1st single & video from The French Pop Dream if they also like Eliza Doolittle, Kirsty MacColl, St Etienne. Why yes. Yes I do (with some reservations). And yes I do.

Please don’t get me wrong. I’ve listened to the new album several times over now, always attracted and ensnared by the two aforementioned songs above all, but increasingly caught in its sweetly tangled web of dissolution and despair, continually surprised by previously unheard sounds and snippets of lyrics. I’m not trying to avoid describing it by mentioning the past: just hoping to provide a little context.

This is an absolute belter of a pop song. It’s way fucken better than anything Best Coast ever managed (he says, at random). If you wanna go for a Yank dream-pop band, go for Neverever, not bloody Bethany Cosentino anyway. (I know, I know. You have no idea who Neverever are, they were so 2010. Ah, how quickly time forgets. Ah, how quickly folk wanna be like the newest folk.)