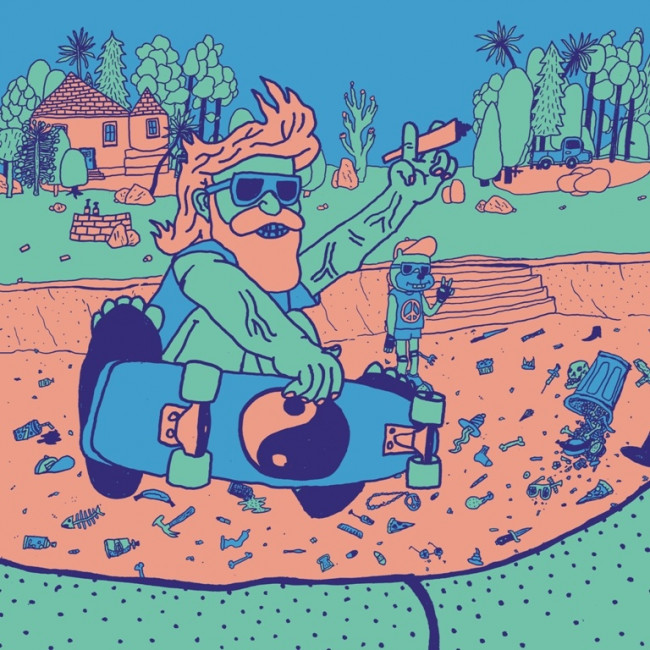 2013 is finally over and I hope I never have to look back on it past this point. I can say now this has been the most dreadful of all my years knocking me down constantly as I come to terms with a divorce and try to pull myself back up and hope for motivation for writing about music, releasing music, or the most basic tasks to get me from day to day. Getting out of bed is a burden when I just want to live the day with my head under the covers. ………….I took a bit of time off from caring about anything new and I stopped listening. I really don’t want to write another word of intro so here’s my top ten.

Cowtown – Dudes vs Bad Dudes
The best live band I saw all year and I got to see them twice. I feel so happy I got to see them before my year went to hell. I spent the night in Leeds at Nash of Cowtown’s house when on the Bastards of Fate tour in late April. He spoke some words to me that would come really true as soon as I got home. Things went to shit soon after I got back to the states, but for three weeks or so I played this album everyday and my spirits stayed up for the time being. (disclosure: I will be releasing Cowtown records on my label in 2014, but at this time I was not working with the band).

Traams – Grin
I had this record sit by my desk at work pretty much ignored for a month. One day I couldn’t find anything to put on and almost instantly it picked me up. Parts Pavement, a caffeinated Shins, a Thermals with purpose. Their nonstop nasal-shout pop attack pepped me up on many a fall afternoon when I just wanted to go home and crawl into bed. I think I might have lost a lot of pay hours without this record to keep me going.

Hookworms – Pearl Mystic
This might be the best record to come out in 2013. I’ve listened to it 100+ times and have yet to get tired of it. I can listen to it an any mood, happy, sad, angry, it serves me just right anytime I put it on. This record lives in a cave and that suits me just fine.

Joanna Gruesome – Weird Sister
Disclosure: I released their first 7″, and will be doing a 12″ with them in 2014, but I didn’t release this record. Weird Sister would have been my favorite record of the year, but it’s too fun and this wasn’t that kinda year for me. Shouts, screams, call outs and responses from lasses and lads with the best Wedding Present machine gun strumming you’ll hear all year. Bratty without being dumb, young without being naive, and sloppy without being just indie.

Younger Lovers – Sugar In My Pocket
The best garage record of 2013 by far. Not steeped in wanna be cool or bad boy meth fueled drunk tank bad boy schtick. It’s about love and loss, and loving again and again and again. Long term, short, nsa, blow-n-go it’s all here.

I’m gonna go ahead and just stop cause I don’t think I even care to finish some dumb list. I spent the last six months listening to each Galaxie 500 record at least once if not two or three times every day. I’ve been a fan for years, but this year these records hit me like a fist to the heart. These three albums wrap up my 2013 better than anything else. The mundane moments captured in song, the waiting up for someone to come home, the feeling of letting others down, the sound of letting your years go to waste.