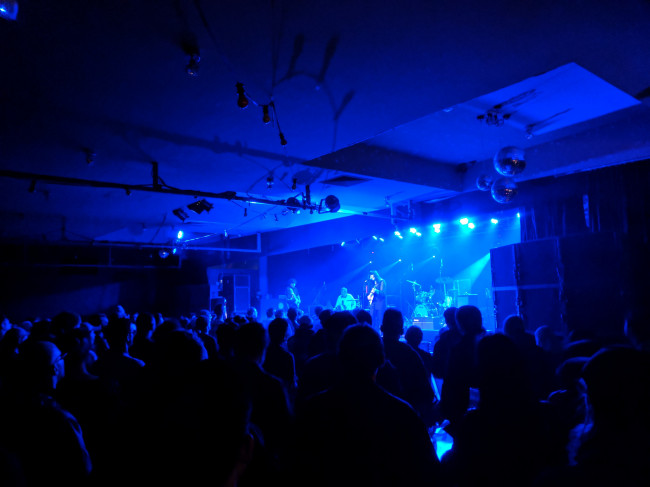 In the words of Aubrey Graham, “I’ll admit it, I’ll admit it”; I’ve not listened to a Real Estate album fully since their 2011 album Days, which, if I remember correctly, sat sandwiched between other similarly inoffensive indie rock albums in my iTunes library. Every few years the band would crop up again, another album, another song, each more pleasant than the last, serenading my white-dude ears with their soft white-dude vocals and melodies.

On this night at the Croxton Bandroom in Thornbury though, there are some sets to get through that I’m familiar with. Parsnip and RVG – in that order – work diligently through their sets of twee Kinks-esque nostalgia pop and frantic-yet-focused personal exorcisms – in that order. Parsnip’s guitarist cuts out at one point, prompting a do-over, which they play off with all the charm you’d expect from their matching haircuts, but RVG’s razor-sharp set of Robert Smith-summoning arena rock goes off without a hitch. RVG share a new song, in which frontwoman Romy Vager pontificates on her lack of sleep, tossing up “it could be the coffee, but it’s probably the speed”.

Eventually the curtains close, the crowd murmurs, and the murmur turns to a warm welcome as Real Estate are presented to us.

Heads bob mildly and someone waves their arms like a soft breeze in the front row as the band dole out their inoffensive indie rock pleasantries. Compared to the vibrant playfulness of Parsnip or the urgency of RVG, Real Estate come off like a band that sort of small-talked their way into an international rock career, never rocking the boat much, but something you can put on while you do your Sunday chores.

When my friend and I duck out for fresh air about a third of the way into Real Estates set, we meet a nice Italian kid called Jack – it’s his first time in Australia as an adult – he tells us he likes to smoke weed and listen to Real Estate, but he’s not all that crash hot on Parsnip or RVG. “They’re really chill,” he says of the headliners.

He’s not wrong too, there’s definitely a vibe in the room; couples sway arm in arm, each song beginning and ending with a healthy dose of woo-ing from the audience. Frontman Martin Courtney swaps between six and twelve string, but as far as I could tell, the set could be one long concept performance of every song that ever wafted blissfully out of a coffee shop.

For me though, and again I reference my inattentiveness to the band’s career for the better part of six years, outside of ‘The Hits’TM like ‘Darling’, songs meld softly into one another, sweet and bland as they are – similar to a bowl of old porridge, after you put too much maple syrup in.