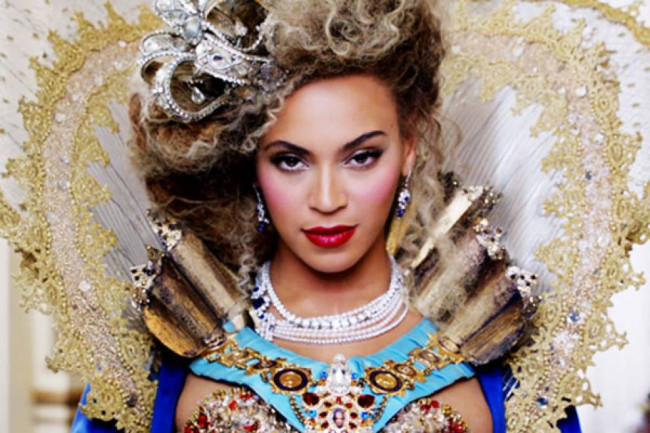 So, as usual, I’m all grumble-grumble, hate-music, nothing-new, blah blah blah. I’ve had phases in the past when I’ve bought hardly anything all year, but then in other years I’ve lived and breathed buying new records. Maybe this is one of those years when I experience a kind of musical anhedonia about most new releases and I feel like the time in school assembly when I was so bored I unravelled my entire sock. But then… I looked at my computer and actually there were quite a few little beauties. These lists of mine seem to always start in the same way.

Beyonce – Bow Down/I Been On

Well, we should obviously begin with this. Bey starts out with the fierceness turned up to sabre-toothed levels: “Don’t think I’m just his little wife,” she tells us, like there was ever any doubt. It’s meaty as a home-made burger, mince overflowing out from the bun and landing on the grill with a kapow-sizzle. But then halfway through, she goes all Laurie Anderson with pitch-shifted vocals and starts to discuss a variety of subjects; her baby hair, a video she was in when she was 14, lairiness; “Didn’t do your girl but your sister was alright, damn”. Playing with roles, playing with sounds, playing with herself and us all. I do bow down, how could I not?

Still on Planet Fierce, and still challenging gender expectations, Cakes Da Killa drops some queer candy-coated filth; dick ‘n’mix with a cherubic face. His manic majesty requests that you, “Take a course in rimmin’/Eat my shit like a feast, don’t forget the trimmins”. Bow down for him too.

Hot Fruit – Falling Off The Grid

My my, a theme seems to be developing here. Yet more questioning of boring gender straitjackets and yet more premium dirt. One of the most epic songs ever recorded, in which the killer hook of, “I want to wrap you up in very heavy plastic/I’m into shit and blood, it is fantastic” doesn’t come in until at least give minutes in. All nine minutes 34 seconds of this are worth your time. “Use your mother fucking inside voice!”

I’ve no idea what this is about, or anything about them, but it’s quite frightening and I like it. I’m not even sure what to say about it, so just have a listen and you tell me.

I have tried to write about Tunabunny’s most recent album, Genius Fatigue, but the words don’t come, even though it’s probably one of the two albums I’ve listened to the most this year (the other one being Hookworms, see below). Its just too close and I’m not prolific enough. Tunabunny are at the opposite end of the scale. One of the things that makes them so unique is Brigette’s voice – it’s excitable, overflowing with bounce, often almost breathless, words cascading out in all directions and landing verb on noun on pronoun like an orgy of poems, if words were limbs. Or maybe when the Library of Alexandria was destroyed, instead of the books burning within it, the letters all broke free and catapulted across the sky and then landed in infinite ways in Athens, Georgia. Tunabunny seem to be forever moving, always recording new songs, always making new art – writing, studying, creating. They make me feel ashamed for my own procrastination. My two favourite tracks on the album are ‘Slackjawed’ and ‘Pachyderm, Fallen’, but neither are on YouTube, so here’s ‘Duchess For Nothing’, which is also brilliant. Tunabunny will be touring the UK in a few weeks time, and if you haven’t already seen them, you’d be a fool to miss them. If you have already seen them, well you know what I’m talking about.

Another ridiculously prolific artist is Keel Her (aka Rose Keeler-Schäffeler) – Brighton-based, she uploads a new, usually solitarily recorded song nearly every week. I’ve chosen this song fairly randomly- it could have been one of many because Keelher seems to be under some sort of curse which causes melodies to continuously seep out of her pores, like spitting out toads, and she must vivify them otherwise they’ll overrun her. Her soundcloud: https://soundcloud.com/keelher is a history of the last year or so of constant productivity and you can hear her developing all the time. Her earlier guitar-based tracks, like ‘Enid Coleslaw’ (https://www.youtube.com/watch?v=rsNUd_siso8) (ET – I think you’ll like this) are lovely pop songs, but she’s recently started to expand sonically, basing more songs around keyboards and aliens and strangeness. She reminds me a little of The Space Lady (https://www.youtube.com/watch?v=Ol-4NHQFIec) and a little of Solid Space: https://www.youtube.com/watch?v=QoQQRmnKBqM and that can only be a good thing

Staying in outer space, this wobbles all over the place, like a baby alien still unsteady on its tentacles, that’s just oozed and woozed its way out of the body of the host if the host was MC 900 Foot Jesus. Thanks to Neil Kulkarni (again) for the heads-up for this (and Lapalux, Chop and Haraket were also high contenders for this list too, but I didn’t want to nick everything from Neil’s singles column (http://fuckyouneilkulkarni.blogspot.co.uk/2013/07/the-funk-singles-page-july-2013.html)

Incidentally, Micachu’s done an even more jellified version, if that was possible (https://soundcloud.com/deekrecordings/blludd-relations-even-steven-micachu).

Oh I haven’t talked about Hookworms yet have I? Hookworms’ album Pearl Mystic is one of those rare records that I prefer more as a whole than as separate parts. A giant, whirling cauldron of space-guitar-organ-screaming, Hookworms are one of the best live bands in Britain (http://www.collapseboard.com/features/best-of-2012-2/still-fuck-albums-tamsins-musical-2012/) and they’ve managed to translate a lot of their singlemindedly ferocious maelstrom onto this album. It sold out within a few weeks and they’ve now been signed to Domino imprint Weird World, who’ll be releasing the album in the US. Nothing could be more deserved, because not only are they absolutely bloody brilliant, but also – and this has nothing to do with the music, but I really want to acknowledge them for it – Hookworms consistently confront people in the music industry who objectify female musicians. My band follows them on Twitter and on many occasions I’ve seen them call out promoters and journalists for dodgy comments, despite the possible detriment it might have on their own career. For an all-male band to stick their head over the parapet in this way is incredibly refreshing and just might make things that little bit easier for my (all-female) band and all the other women in music who want to be judged on the same criteria as their male peers. Basically I <3 Hookworms in a myriad of ways. And you should too.

I don’t seem to have chosen much shouty-brat-pop yet do I? Let’s put that right immediately. Dog Legs are a girl-boy duo and are ace. They are brat-core par excellence and very, very loveable.

I’ll finish off with some pop songs by bands using guitars in the traditional manner in which bands use guitars. I have nothing much to say about any of these (and also time’s getting on and I need to pack for my holiday), I just like the songs:

https://www.youtube.com/watch?v=PgRaCxSLO_g (and yes this is probably the most horrific band name of all time)

And I also really like these too but ET’s already talked about them.

This was my favourite reissue.

And let’s finish with a giant, all-consuming POP record about the end of the world: “What’s the matter? Your chicken taste like pork?”